At first, he was a novelty, a mouthy Irishman with a power KO. Then he was a contender, grasping the belt in the most dynamic of fashions. But it was only Saturday night at the T-Mobile Arena on the Vegas strip, that Conor McGregor began to build his legacy.

He came to the city a beaten man, Nate Diaz having choked victory from him five months prior. There was a suggestion on the desert air that McGregor was going to the career gallows. A loss surely relegating him back to novelty status – another flash in the pan in a sport filled with them. The rising celebrity of Nate Diaz, combined with the media and the UFC’s apparent tiring of Conor’s persona seems to forecast the beginning of the end for the proclaimed ‘McGregor Era’. His opponent was bigger, more powerful and had already bested him once.

Back home in Dublin, the chatter in the barbers and the whispers over pints spoke to private worries of inevitable defeat. 20 out of 21 professional fighters selected Diaz to go on and repeat the feat. Even the man himself seemed subdued. The strut and cutting one-liners so inherent to previous fight weeks had evaporated. Something was different, something had changed.

What we didn’t realise then was that the change was not a decline, but the growth of a professional and profoundly personal nature. On Saturday night, Conor McGregor was transformed into something worth far more than all the millions he was surely paid. This was less red panty night, more red-letter day. And given the war that was to come, the colour was more than appropriate.

It began with the walkout, the lilt of the foggy dew harkening back to previous moments of triumph. But when the camera cut to Conor making his way to the Octagon there was no mistaking the solemnity of his face when compared to previous entrances. No ducking and diving, no kiss before outstretched arms. This time would be different. And so it was. 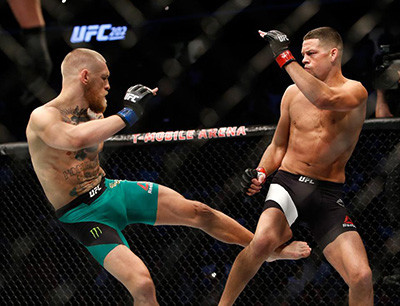 For two rounds, it was perfect. Conor measured distance perfectly, hacking like a lumberjack at the connecting tissue of Nate’s knee with his shin. While simultaneously dodging and returning precision shots.

Twice a swiping left from Conor crumbled Diaz, sending him tumbling to his back to the delight of the crowd. Instead of a rush to swarm in and close the show, as he had so often before – McGregor stood back and merely beckoned Diaz back to his feet. It was immediately clear he was fighting smarter than we’d ever seen him.

When he got up each time in those early rounds, Diaz looked unstable on his lead leg and when asked, offered nothing to trouble the featherweight champion. So far, so good. Conor was superior and patient. Then, with about a minute to go in the second – it happened.

As though someone had flicked a survival switch in his brain. Diaz strode forward and struck Conor with a shot that looked like the twin brother of the one that put him on the back foot in March. All of a sudden it was as though we had stepped into some horrible time machine, transporting us back to that very moment.

Saved By The Bell

Diaz lumbered forward, slinging more and more bombs that pressed McGregor to the fence and to the edge of his limits. Some connected and some were slipped, but it was clear: If things continued like this, Conor McGregor was in deep trouble. Only one thing saved him, and it wasn’t the buzzer.

Diaz style is built on chaos, on bullying you into an engagement. Luring you into a nuclear war where very few can survive the fallout. Trying to stand up against the hurricane had been McGregor’s undoing last time round. One can assume that in his private hours he must have replayed the defining strikes of March’s madness in his head over and over. Agonising over what he would do differently given a second chance. This time, he refused to be lured.

Indeed, he did take troubling punches at the end of the second. But when he could, he visibly swallowed his pride and escaped, recycling to the centre of the octagon to begin again. There were boos from the gallery. The buzzer sounded and on they went to their corners. Conor visibly weary, beginning to fray. On the mic, Rogan sounded almost gleeful at the prospect of his demise

The third was stomach-churning to watch, but again it was the change in Conor that was clear, particularly when it came to his work against the cage. Faced with the larger man Conor wriggled and writhed, even reversing Diaz once and avoiding a takedown or two. Nate knew this was his moment though and was relentless in chasing down McGregor. When he finally caught up to him, it was against the cage with an over minute to go.

If it was talk that got McGregor into the ring, and skill that helped him stay there – it was an only heart that kept him on his feet. Diaz, smelling blood, gave it all then. Power shots to the head and body raining down on Conor and many in the room must have thought the thing done. He looked dead on his feet. And when the buzzer came after what seemed like an age, it couldn’t wash away the atmosphere of dread. The crowd bayed as Conor collapsed onto his stool. You have to wonder what went through his head. 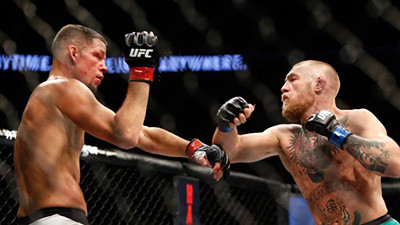 All great sporting champions must have these moments. The ones where they decide if they will swim against the current or simply let themselves be consumed. All of the suits, cars and bright lights mean nothing in times like these, the ones where there are your own will and naked desire left to save you.

John Kavanagh spoke instructions in his ear, but Conor’s head was bowed. His shoulders bobbed up and down as he struggled for air. Every so often he raised his head, closing his eyes for seconds at a time – perhaps trying to see the way to win in his mind’s eye. When his time did come and he was called, he rose to his feet. Put his hands on his hips and nodded to himself before walking back to face the most important 10 minutes of his fighting life.

Breathing Hard In The Later Rounds

There was something that none of us had counted on though. If Conor was searching for a means to rise again, across the ring, the indestructible man was having his own problems. His knee was rash red and swollen thick from the first two rounds of kicks. Which Conor had continually added to overtime, albeit at a diminished rate. The skin around his eyes was cut badly, ballooning even as we watched. He had eaten countless devastating shots and finally, and maybe most crucially of all, at last, he was breathing hard.

When they came together for the fourth, the Diaz pressure, so relentless in the third, had wilted. There was now two feet of distance between them as Nate pulled at his eyes frantically in an attempt to stem the bleeding. Like a power bar on a computer game, Conor’s stamina visibly began to grow, little by little. He began picking at the sagging Nate once more.

Diaz left with a momentary depletion of his inexhaustible gas tank, was left with no other option. He pushed Conor to the fence again. In a moment for moment reversal of the last fight, Nate attempted to take Conor down, but to no avail. Conor’s arms and the balance held fast. Had he not been grappling for his very reputation, he might have smiled – Diaz was the wrestler now.

It was nearly all Conor in the fourth, Nate swinging and missing while Conor drilled him from distance over and over in the counter. If Diaz’s face was bad before, it was now a pulped and swollen mask. One more round to go, and those judging the fight online and in Nate’s corner determined: Diaz would need a finish. And like the machine that he is, he came for one.

Effective Grappling Against The Cage

The story of the fifth, and ultimately that of the fight was composure under dogged pressure. On the feet, Conor would recycle and return for a better vantage. Against the cage, he grappled effectively, stuffing yet more takedowns. He ate an elbow that you feel would have ruined lesser fighters that late in the day. But Conor only hung on and glanced up, checking the clock.

In the final moments, Nate swept his leg and the two tumbled together, Nate posturing up flinging down parting shots all the way to the close. When the klaxon sounded, he reached down and pulled Conor to his feet. They embraced, having given the world a war befitting of any belt.

“You’re an absolute warrior,” said Conor over and over. It was the truth for both of them. The sheer indomitability of Nathan Diaz and the heart, skill and will of McGregor had produced a fight for the ages. Something rarely found in the over-hyped world of combat sport, it had it all. 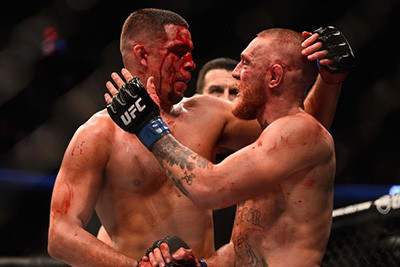 When Conor McGregor heard his name, there was no wild celebration, just a quiet nod toward a job well done. He had faced what must surely be his darkest fear down toe to toe and found the strength to survive and the courage to stick to the plan.

Beyond the talk from his mouth, beyond the skill of his hands, it was his heart and mind that saved him. The good work had been done early on, the damage to Nate’s eyes and leg preventing MMA’s answer to the Terminator from being able to be fully effective.

A Fight With Classic Written All Over It

In a classic sporting trope, like Palmer & Nicklas, Borg & McEnroe or Gatti & Ward. The names of McGregor & Diaz were bound together Saturday night – a third fight now seeming more like destiny than anything else. They have elevated the sport above expectations, borne on the back of what is now MMA’s greatest rivalry.

In a time-honoured way, as only sport can do, we have watched a boy become a man in the arena over these last crazy years. So many questions were answered Saturday, questions on Conor’s ability, his temperament and on his place in the pantheon of greats.

When that third fight does come, the man who steps in will no longer be the Crumlin boy. The novelty or the contender. They are gone, replaced by a fighter and a champion that has come of age at last.