The countdown is more than on for UFC 202 Diaz vs McGregor. We are just over 30 hours away from a night of revenge. Or another night of heartbreak. For Irish combat sports, this can be a big weekend of positive rejuvenation, or it can be another kick in the nuts for those of us who support our countries fighters.

The Olympic dream of our boxers is over. That can be read about everywhere online (and thedailyclothesline.wordpress.com) and the reasons for that are clear.

Which brings us to Las Vegas this weekend and Conor McGregor taking on Nate Diaz in a rematch from the March fight. In that last fight, McGregor had a change of opponent 11 days out and Diaz had to get himself off the beach and into training to take on the in-form fighter in McGregor.

We know how that went. The rollercoaster, the ups and the downs. In short, McGregor was able to hit Diaz but not put the terminator away. Diaz took the best shots and then took over a tired Conor and choked him out.

Since that fateful night on March 5th, both fighters have made some changes. The McGregor show has been far quieter than previous events; Nate Diaz also has calmed the pre-fight banter that marked the 11 days leading up to the previous fight.

McGregor knows that if he loses this time, the mystique is completely gone and no one will be scared of the mind games or the in fight games that he plays and uses to his advantage. Diaz also knows that he is on the verge of taking the ‘biggest star in MMA’ mantle from Conor. There is a huge amount of added pressure on both fighters this time.

If you use logic, then Diaz is too good and is the wrong style for Conor. Diaz can take a punch, is unstoppable on the ground and has the mind to handle the McGregor mind games. 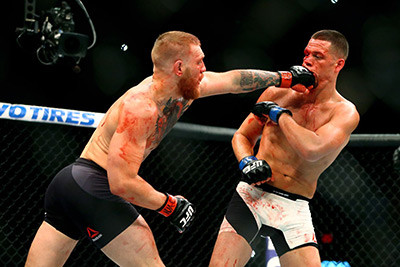 Because this is fighting, logic doesn’t always apply. There is something to be said for the fighter who has their back against the wall, with everything to lose this makes McGregor a different animal. He knows he can make Diaz bleed, he knows he can hit him.

Conor has brought some top-notch sparring partners to add to the great team he already has around him. He is adding to his repertoire and trying to bridge any gaps that maybe there.

He is now used to the weight difference; he has been in there with Diaz and felt his power and skill. There is no unknown about Diaz. This offers encouragement to McGregor. Diaz won’t come in with anything that he hasn’t come in with before.

So now it is crunch time. Who wins it?

For me, Conor either wins in 3 rounds or Diaz wins the decision. I am firmly sitting on the fence here. My 2 favourite fighters battle it out for my entertainment at 4:30 am for UFC 202 Diaz vs McGregor. What could be better?

As usual, @nkeegan for debate and discussion.