This Saturday night will see the return to the octagon of The Ultimate Fighter Latin America winner Yair ‘El Pantera’ Rodríguez.

The 23-year-old Mexican first came to our attention while competing on the inaugural season of The Ultimate Fighter: Latin America. Representing Team Velasquez, Yair’s progression to the finals was relative as straight forward as it was impressive.

Rodriguez finished both of his opponents in the quarter-finals and semi-finals. Before being matched with Leonardo Morales in the Featherweight final at the massive event that was UFC 180.

El Pantera won a comfortable decision victory and in doing so used this massive exposure to its fullest potential. Rodriguez landed some spectacular shots during the contest. And received widespread praise in return for his crowd-pleasing entertaining style. 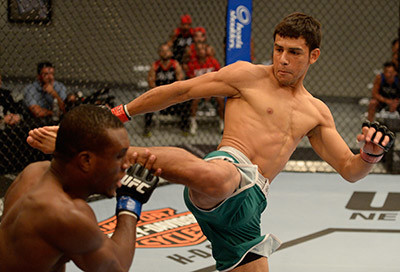 Coming from a Taekwondo background, Rodriguez really utilises his kicking techniques. Throwing outrageous jump kicks, spin kicks and hook kicks. Like his chosen namesake the panther, he has a fast and elusive style to punish his opponents with devastating counters if cornered.

For El Pantera’s second official UFC bout he returned to Mexico City. The home of course to that glorious TUF tournament-winning performance against Morales. This time he would be taking a jump up in competition, taking on 10-1 prospect Charles Rosa, who’s only defeat came to seasoned veteran Dennis Siver on his UFC debut.

The pair didn’t disappoint, with Rodriguez coming out on top with a split decision victory. That also earned both men fight of the night bonuses. Yair showing that yes he can cut it in the world’s premier organisation. But also that he was a bit of a diamond in the rough, and with the right polishing could have a glittering career ahead of him.

Yair Has Been On A Run In The UFC

Since then Rodriguez has gone on to bring his record to 6-1 (3-0 UFC). With a comfortable decision victory over Dan Hooker at UFC 192 in October last year.

There is no doubt that in Saturday’s opponent Andre Fili, stands Rodriguez’ biggest challenge to date. Like Yair, Fili is a big Featherweight and can use his height and weight effectively when he implements his solid wrestling game.

One would think the key to victory for the American in this fight would be to make it a wrestling match. Close the distance on Rodriguez, put him against the cage and grind him down. Don’t allow the Mexican time and space to unleash them ferocious strikes.

Easier said than done of course when you are facing someone as talented and courageous as Rodriguez. El Pantera shows no fear in the octagon and shows little weakness either. Even when opponents have tried to make it scrappy he has shown the sort of maturity. Calmness and patience you wouldn’t expect to find in such a young competitor.

The Featherweight division is in a bit of a limbo at the moment. With champion Conor McGregor pondering between life in the higher weight divisions and retirement.

José Aldo and Frankie Edgar will slug it out for interim honours at UFC 200 regardless. But other than these two and the ever-improving Max Halloway, I don’t really see anyone else in the top 10 that Rodríguez shouldn’t be ready to come to the turn of the year.

The sky is the limit for Yair Rodríguez. We all have seen what Conor McGregor’s success did for the sport in Ireland. And like the Irish, the Mexicans love a good fighter and will get behind their man.

When I think of Yair and the potential he possesses. I can’t help think of one of my favourite boxers of all time, boxer Oscar De La Hoya. Like Rodríguez, ‘Golden Boy’ burst onto the boxing scene at a young age. Had a long glittering career with world titles in multiple weight divisions before being ultimately rewarded with Hall Of Fame honours.

Could Yair Rodríguez go on to become Mexico’s ‘Golden Boy’ of MMA? Time will tell, but perhaps we will know more about his chances come Sunday morning.