Women’s MMA and Its Evolution

One of the most enthralling aspects of following the wild sport of MMA is watching fighters evolve and grow across their career. It’s when you take a step back through that you can see the actual sport as a whole, changing in front of your very eyes. MMA is still so young that we’re constantly seeing new and innovative styles as everyone looks for the next winning formula. Due to its sudden explosion in popularity, at times the women’s MMA side of our sport has been even more fascinating to watch.

Still incredibly new to the mainstream audience, it’s no surprise that we are seeing a rapid improvement in-depth and quality with almost every female fight. Last November when Holly Holm picked apart and finished the dominant ‘Rowdy’ Ronda Rousey, everything changed.

Eight months later and it feels as though the game is altogether different. It was only as I watched Valentina Shevchenko best Holly Holm in a fight-filled with a sublime striking technique that I actually considered what 2016 has represented for women’s MMA.

As fans, we quite often get caught up in the hype. It’s just the way many of us operate. Dana White yells at us so aggressively that we just can’t argue with him. It’s for that reason that my brain had pretty much deleted any memory of the Holly Holm that fought against Raquel Pennington and Marion Reneau.

That Holly Holm was a good fighter but she wasn’t the destroyer that the Rousey fight had exposed to the general public. It’s for that reason that I genuinely thought that Holm would handle perennial contender, Miesha Tate, quite comfortably on the eagerly anticipated UFC 196 event.

It was a key fight in the woman’s division as it would be the first Bantamweight title fight without the popular Rousey. Co-main eventing such a huge event, it was vital that the fight lived up to the expectations and provided the excitement and drama of ‘Rowdy’s prior defences.

Holly Holm and Miesha Tate went back and forth

It exceeded them. The fight was, in my mind, a classic. Filled with tactical brilliance and championship spirit. For 23 minutes Holly Holm and Miesha Tate went back and forth. Holm showed incredible concentration and self-belief in coming back from being dominated in the 2nd round to controlling rounds 3 and 4. It wasn’t enough though and the unbreakable Tate pulled out a spectacular 5th round submission win.

It was not only an inspirational moment of defiance from Tate. But it was also a fight that represented a progression in the tactical side of the sport. This was a fight contested like all title fights should be. It was competitive, spirited and dramatic. This will have been a fight forgotten by some due to the whirlwind that came with Nate Diaz’s win over Conor McGregor. But I think it will be remembered well in history.

Don’t get me wrong, Women’s MMA has never been short on excitement. In fact, the woman who left as champion that night had many a barn burner in the years prior, including wars against Julie Kedzie and Cat Zingano. However, this fight felt different. This fight felt truly elite. It was less about emotion and passion but instead skill, technique and tactics. 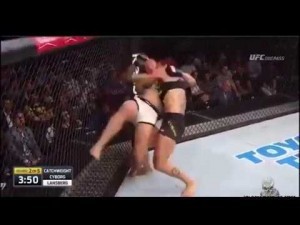 When the topic is women’s MMA, the name ‘Cyborg’ will always appear. Wherever you stand on the ongoing weight drama, as a fan, Cristiane ‘Cyborg’ Justino is a pleasure to watch.

And her UFC debut this May was no different. It felt like another moment to remember in the progression of women’s MMA as Justino showed timing, power and accuracy in quickly stopping the brave Leslie Smith.

It was a display of serious striking ability. Who knows what’s next for the dominant Brazilian. But that night the mainstream MMA audience saw something they’d have never seen before in a female bout.

That then brings us to the infamous UFC 200 week. It’s a week that we will be remembered for many things, both good and bad, but it’s easy to forget some of the great fights that took place before 200 even began. The Friday night show featured another championship classic, this time from strawweight Joanna Jedrzejczyk and Claudia Gadelha.

To be fair, neither women was new to showing elite skill, but this fight was the perfect storm. It had emotion and rivalry going in, but the back and forth inside the cage made anything on The Ultimate Fighter set look tame in comparison.

Gadelha made a great start before eventually fading. At this point, Jedrzejczyk showed the conditioning and striking prowess of a truly great champion. She was aggressive and spiteful in her attacks against the Brazilian, especially in the championship rounds.

Gadelha showed courage though, sticking it out until the end bravely. The two embraced afterwards which was a nice ending to a superb championship fight. 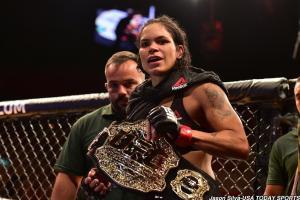 To conclude, I guess my point is 2016 has been a very important year for women’s MMA. Not just because of their more common spots in main events either. There just seems to have been a real step up in quality and depth as of late.

As well as that though, it’s been a joy to watch crossover strikers like Holm, Shevchenko or Jedrzejczyk bring their world-class talents to MMA. It’s been exciting to see new, young fighters with well-rounded skill sets like Rose Namajunas, Tecia Torres, Claudia Gadelha and many others.

Right before our eyes, we are watching women’s MMA truly grow in both quality and depth. Whilst much of the MMA world is discussing the business problems that come with a constantly moving title belt. Stop, sit back and just start enjoying the fights. They’re only going to get better.