As a Canadian and as a Mix Martial Artist fan, UFC 189 was supposed to re-establish Canada’s hold on the welterweight division. Beginning with Carlos Newton’s short stint as the champion in 2001 and then Georges St. Pierre’s dominant 5-year reign. It only made sense that “The Red King” Rory MacDonald would bring the title back home to Canadian soil.

However, those plans were put on hold for now. Hopefully. MacDonald faced a disciplined and seasoned veteran in Robbie Lawler Saturday night and had his hopes of being a champion de-railed (once again, for now, hopefully).

Every Canadian MMA fan was on the edge of their seat that night watching the young GSP protégé. Slowly become more and more bloodied after an onslaught of perfectly timed combinations from the champ in the first two rounds. I am sure every Canadian spilt their beer and poutine as they jumped out of their seat in the third round. As Rory rocked the champion with a head kick and was going for the finish, throwing everything he had at him. 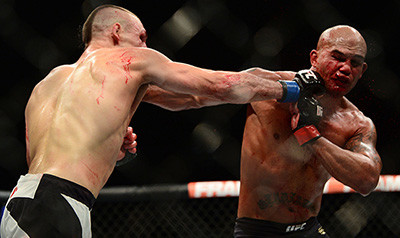 Nevertheless, Robbie’s experience came into play as he stayed calm and kept his composure and in fact. Smiled as he staggered toward his corner after surviving the end of the round.

Lawler and MacDonald put on an exciting back and forth battle. But in the end, it was Lawler who successfully defended his title finishing the bloodied and battered Rory in the fifth and final round.

In the end, though, this was a great night for the young Rory MacDonald. He proved he has what it takes to hang with the best. He also showed that he is durable and has the heart of hopefully one day champion.

What’s next for Rory?

What’s next for Rory? This is an exciting time for the welterweight division, Matt Brown just put on a dominant performance finishing Tim Means. And Carlos Condit is back and just added another finish to his repertoire, stopping Thiago Alves. Therefore, it’s possible that MacDonald may face Condit again, or maybe Matt Brown. Both would be exciting matchups and set the winner up for title contention.

The superfan in me though has been wanting to see Matt Brown and Carlos Condit duke it out in a 5 round main event for a very long time. And I think the UFC knows that this would be an amazing fight and draw in a lot of fans. In that case, maybe Rory will fight either Dong Hyun Kim or the up and coming to Gunnar Nelson.

In the end, Rory MacDonald may have lost Saturday night, but he gained a lot of experience and most of all respect. No one can doubt MacDonald, as he put on an incredible performance and demonstrated a lot of grit and tenacity. I think Rory will come back from this an even more determined, composed and motivated fighter. It is an exciting time in the welterweight division, and we’ll be seeing a lot of great matchups in the last half of 2015.