Wayne McCullough is one of Ireland’s finest ever boxers. He possessed the technical skills necessary to procure an Olympic silver medal and become a world champion. But his heart and never say die attitude was what endeared him to fans. During a lengthy career, the Belfast born boxer captured the WBC title in the bantamweight category and shared the ring with the biggest names of his era. We caught up with the Pocket Rocket to ask him a few questions about his remarkable career, life after boxing and his involvement with the Ultimate Fighting Championship.

What age was you when you started boxing and why did you choose boxing? Did you ever try any other martial arts?

I was about 7 when I started boxing. I had my first fight when I was about 8. I went along to the gym with my two older brothers but when they stopped going I kept on. I never tried any other martial arts until recently. But if wrestling in the street with your mates is martial arts then, yes, I did (laughs).

Did you ever consider competing in MMA yourself? If it had been around when you were starting out might Wayne McCollough have gone down that road instead of pursuing boxing?

If it had been around when I was starting out I’d probably have done both!

When you vacated the WBC belt and moved up in weight, you challenged for World titles on a few occasions. Those losses to Hamed and Morales were the fight of the year candidates and halted their KO streaks.

Do you take pride in those performances or do you look back on those fights with any regrets? 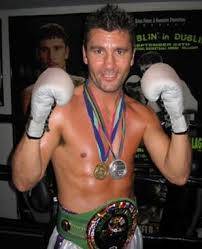 My first loss against Daniel Zaragoza was controversial. We got WBC fight of the year. I still believe Hamed ran from me and I should’ve won that night – only my opinion of course. Morales was an amazing fighter and he said afterwards that he wanted to quit on his still after the 9th round. I wish he had! But I don’t have any regrets from any of my fights. Yes, I wish I’d won them all but I’m proud of my performances and accomplishments.

You challenged Bernard Dunne a few years back. Were there ever any formal talks for that fight? Did his camp have any real interest in the fight?

There were never any formal talks to fight Bernard. He is my friend. I thought it would have been a great all Ireland showdown and would have been great for the fans. I don’t think there was any interest from his camp. They seemed to steer clear of me any time I mentioned it. I’d have loved it though.

You became an ambassador for the UFC a while back. How did that come about and are you still involved?

I’ve known Dana White for over 20 years and he approached me at a UFC event back in 2006 and asked me to come work for them. I loved every minute of it. I no longer work for them but I still see Dana and go to the events. I’m a big UFC fan.

Are you still training boxers and MMA fighters?

I’m doing mostly personal training at the minute and I stay in top, top shape myself. You never know when you could be asked to step back in the ring and I want to stay ready! I’m working with a couple of amateur fighters but I’m hoping someday a kid will come along whether it be boxing or MMA and I can take him to the top.

What is your assessment of the level of boxing in MMA?

It’s a level below world-class boxing. They could be taught to be better. But they’re not professional boxers so they use their other disciplines as well. Boxing is only one part of what they do.

Which do you prefer? Boxing or MMA and do you watch any other combat sports?

Obviously I love boxing but the UFC are putting on more exciting fights now. It’s great to see boxing back on NBC and the Mayweather – Pacquiao fight coming up is good for the sport. But we can’t just rely on one big fight every few years!

I love football. Liverpool is my team!!! I just didn’t grow enough to be a goalie.

Are you still living in Las Vegas and do you visit Ireland much?

I split my time between Vegas and Santa Monica. The last time I was in Belfast was 3 years ago to carry the Olympic Torch. I haven’t been back since. I miss it a lot but my life/work is over here for now.

There’s a lot of talk about head trauma and brain injury lately. Do you feel that you incurred any long-term injuries or has your health been affected by your aggressive fighting style?

Not at all. I didn’t get hit as much as people thought I did. Eddie Futch taught me to roll with the punches and block the shots. I blocked a lot with my face – don’t get me wrong (laughs) – but I’ve been tested by the Cleveland Clinic and come back all clear.

Do you subscribe to the idea that too much hard sparring should be avoided or in your opinion is it necessary to spar hard and frequently to reach the top level?

I used to have one hard spar every now and again. It’s not necessary. I love sparring but I always brought in guys that would work with me and that I trusted wouldn’t try to take advantage of the situation.

With all the talk of PED’s in the UFC recently, do you think drug use in MMA is rampant? Do you think the testing in MMA and boxing are strict enough?

They’re implementing stricter testing. It’s rampant in both sports but no one says anything about it until they get caught. I say ban everybody for life if they’re caught but my advice is not to cheat in the first place.

Lastly, who are your favourite fighters in MMA and boxing and who was your toughest opponent?

I like Floyd for his defence and GGG for his offence. Conor McGregor is the obvious choice for MMA but I also like Cain Velasquez. My toughest opponent was Erik Morales because he hit me hard from round one to round 12. He didn’t stop and I took every shot (laughs).