There are three stages to the career of Vitor Belfort. The early and middle stages of his career are set in the history books and will be forever held universally by MMA fans. And appreciated by the masses for many different reasons and accomplishments.

At just 19 years old, Vitor Belfort took a flight from his native Brazil to the tropical destination of Hawaii. Unlike most, he wasn’t in a beautiful country for a holiday. He was there to compete in his first MMA fight. Against a man seven inches taller, and over a hundred pounds heavier by the name of John Hess.

Belfort won that fight by knockout, in just twelve seconds. In his second fight, he was invited to compete at The UFC 12 heavyweight tournament. After beating two fighters in one night, and being the youngest person to ever get a win in the UFC, the phenom was born.

A win over the mighty Tank Abbott earned him his first shot at UFC gold against Randy Couture at UFC 15. The champion weathered Belfort’s striking. However, and tired the challenger with wrestling and clinch control, stopping Belfort at around 8 minutes in the first round. A couple more wins in the UFC, including the memorable knockout of Wanderlei Silva, saw Belfort leave the organisation for Pride in Japan.

Although he lost his first fight in Japan he amassed a 4-1 record in Pride, beating notables Gilbert Yvel and Heath Herring. The beginning of the Vitor Belfort story had been written, and the middle part was going to be a very different one, with very different challenges.

When Belfort returned from Japan he re-signed with the UFC and lost his return fight to Chuck Liddell. A win over Marvin Eastman set up another chance at UFC gold against former foe Randy Couture. Around three weeks before his title shot, Vitor’s sister Priscilla disappeared and now rumoured to have been kidnapped. Vitor was close to his sister, and despite arrests on the case in 2007. He and his family maintain their belief that she is still alive.

Despite what was happening in his personal life. Vitor won the fight that night and was crowned the new UFC light heavyweight champion of the world. What could have been the start of a new celebratory chapter for Vitor? Was quickly squashed when he lost the title back to Couture in the immediate rematch. 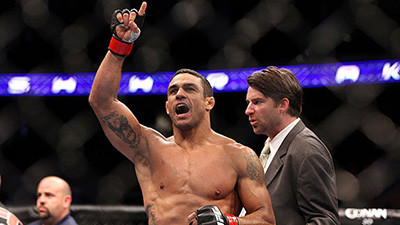 Vitor had just one more fight in the UFC losing to Tito Ortiz, before leaving the Organisation. Going overseas and fighting for pride, cage rage, and Strikeforce. Vitor Belfort was a forgotten memory on the big stage of MMA. He had become almost a journeyman who still had the skills and the will to fight. But was nowhere near to the bright lights he once knew.

It soon became a bigger deal for media and fans alike when the names such as Fedor, Tim Sylvia, Arlovski, Rothwell, Barnett, Little Nog, Sobral, Linland and Buentello signed up. It was like every fighter on the planet that mattered or had a place in the fans’ hearts, that wasn’t in the UFC was on this card. And so was a man called Vitor Belfort.

Knocking out Terry Martin who had built a name in the UFC, set up a second Affliction meeting, this time with Matt Linland. This was it, this was the test. The stage was set for Vitor to prove to the media and fans that he was really back. 37 seconds into the first round, Belfort knocked Linland senseless with a left hook.

That punch may have been the most important of his career, for that punch showed the world, he was back. Not only was he back, but he was ready for the big stage again. And ready to start yet another new chapter in his career. The final chapter may be the most talked about, and the most influential chapter in his entire story.