Vitor Belfort Returning to The Octagon

October 1996, the location Honolulu Hawaii – Superbrawl 2. A 19 year old Brazilian by the name of Vitor Belfort is about to make his first appearance as a professional mixed martial arts fighter. 12 seconds into the first round and his much larger opponent John Hess would be laying on the canvas, rendered unconscious after a barrage of unanswered piston-like blows… the Phenom had been born…

At just 19 years of age, fighting on the biggest stage in the world. Taking on and beating fighters who sometimes outweighed him by as much as 140 lbs (63kg’s) and crushing them! With three professional fights and a UFC Heavyweight tournament title under his belt before he had turned 20. The mixed martial arts community knew they had something very special on their hands. 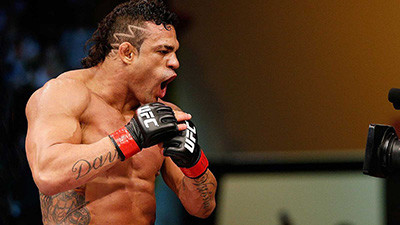 With perhaps the fastest hands and most explosive finishing capabilities ever seen in the sport at that time. Vitor Belfort would go on to establish his credentials as a knockout specialist. Holding the most KO wins in all mixed martial arts (17), in the history of the UFC (11) as well as the most first-round wins by KO in MMA history (12).

Competing in the biggest promotions around the world. While taking on a who’s who of the greatest fighters the sport has ever seen including Wanderlei Silva, Kazushi Sakuraba, Chuck Liddell, Randy Couture, Tito Ortiz, Alistair Overeem, Dan Henderson, Anderson Silva and Rich Franklin. Going on to take the UFC’s Light heavyweight title from Couture in 2004. Vitor Belfort is a guy who has seen and done it all… and some.

What Happened To Vitor’s Sister?

Just prior to his fight for the title with Couture, Vitor’s sister Priscila Belfort disappeared without a trace. It was subsequently discovered that she had been kidnapped and killed in relation to an unpaid debt to drug dealers owed by another woman. To this day the body has never been found. It was an event that turned his world upside down and would have finished most people, but not him.

He would go on to lose the UFC LHW title the same year, along with a number of significant losses and uncharacteristic performances. Which eventually led to him leaving the promotion and jumping between multiple organisations including Pride Fighting Championships, Affliction and Cage Rage where he won their light heavyweight belt. Before finally returning to his roots and the Ultimate Fighting Championships in 2009.

Since making his return, Belfort has gone 6 – 2, with his last 3 wins all by way of a spectacular knockout! The old Vitor was back! But not all clouds have a silver lining as his positive test for TRT (testosterone replacement therapy) abruptly put a halt to any potential title shot hopes. Along with making Belfort very much the poster boy for the sports PED abusers.

In reality, it’s an unknown as to how many fighters on the UFC roster were actually using peds. What benefit did it give and what fights were either won or lost as a result. We do know that some fighters on the drug still lost regardless. Does TRT make you do spinning back kicks? No! But it does help you push yourself more in training, to perhaps achieve higher levels of perfection in your craft, recuperate more quickly, extend your career. Who knows, I’m not an expert!

Has Vitor Belfort Been Cheating? 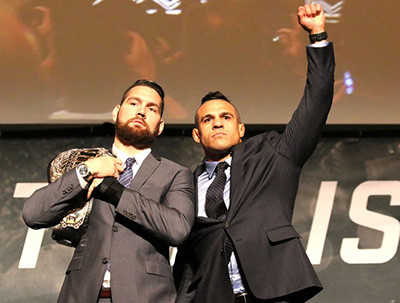 But what a lot of people assume is that Vitor had been cheating for some time, at least while fighting in Brazil. Why? Well, there are so many reasons, but let’s not get into that now.

What we do know is that many of his peers were also taking the now-banned drug. And by all accounts, it was rife and in many ways very much part of the sport. Something we is truly only dealing with now, some 20 years down the road.

Let’s not forget that while Vitor Belfort became the poster boy. Fan favourites such as Chael Sonnen, Wanderlei Silva, Anderson Silva and Dan Henderson were all caught using one form of PED or another. Right up until recently rumblings by Georges Saint Pierre that the use of PED’s in the sport was commonplace went pretty much unheeded. So the full extent of their use may never be known. And how much of his longevity in the sport is down to “vitamins”? as Hendo might say. Let him without sin cast the first stone Dan.

Sufficed to say that by all accounts he is now clean and ready to face the champion, Chris Weidman, for the middleweight title this Saturday night in the MGM garden at UFC 187. What will a post-TRT Vitor look like? At 38 years young, facing the new breed of a mixed martial artist in Weidman. Can he go out there and do something no one else has been able to do and stop the champ?

Turning Back The Clock

Can he turn back the clock to the old Vitor, the destroyer of worlds, The Phenom! Half a lifetime ago he made his first appearance on the worlds biggest stage. Will Saturday night be his crowning achievement in the sport? Regardless of those past indiscretions, there is no doubt that there will be a lot of old schools Vitor fans hoping he can still shine, hoping he has one more big fight left in the tank. One last time for one of the pioneers of the sport, for the old schoolers. Before the inevitable changing of the guard.