Combat sports are by their nature, rife with underdog stories. Boxing has long been known for its Cinderella Men, with stories like 42-1 underdog James ‘Buster’ Douglas. A man so unfancied that many Vegas casinos weren’t even offering odds on him, stunned the boxing world in 1990.

In the Tokyo Dome, Douglas dethroned and uncrowned the undisputed Heavyweight Champion of the world, Mike Tyson with a historic 10th round knockout. In doing so, Douglas lifted the veil on a man previously thought invincible, but more than that. He re-injected some of the romance that Tyson’s reign of terror had taken away from the Heavyweight division.

A little closer to home, we have the ever-popular Martin Rogan. The Belfast born cab driver didn’t turn pro until the age of 33 and then proceeded to go on a historic 12-0 run that saw him become the first-ever winner of Matchroom’s Prizefighter boxing tournament. Which is credited with sparking a renaissance of boxing on Britain’s leading sports network, Sky Sports.

He would then go on to topple former Olympic Champion Audley Harrison. And finally, win the Commonwealth Title against Matt Skelton live on prime time television. Kickboxing too has had its fair share of surprise winners. One of the most prominent of which was the 2001 K1 World GP, where current UFC favourite Mark Hunt defeated Brazil’s Francisco Filho in the final. The presence of both men in the latter stages was a huge surprise, with the likes of K1 legends Ernesto Hoost and Peter Aerts. As well as French knockout artist Jerome Le Banner all far more fancied.

In Mixed Martial Arts though, we have had our own unexpected champions. And there’s no greater place to start than Inglewood, California for UFC 199, and Britain’s own Michael ‘The Count’ Bisping. Whether fairly or not, Michael Bisping has developed a reputation for being a nearly man. For being someone who just can’t get over the final hurdle, and just can’t get it done in the big fights.

A loss in a Middleweight Title Eliminator to Dan Henderson at UFC 100, a high profile loss in the UFC’s first-ever trip to Australia to Wanderlei Silva. Chael Sonnen controversially bested him in yet another title eliminator. Add in Vitor Belfort, Luke Rockhold and Tim Kennedy and you can start to understand how this picture was being built.

It was almost looking as though his career was set to drift away without ever fulfilling potential until he was given the fight he’d wanted his entire life, Anderson Silva in the UK. After being knocked dead at the end of the third round, Bisping got up and won the fourth on all three scorecards.

His eventual points victory got him closer to his dream, and after Chris Weidman’s injury, he was offered an opportunity to rematch Luke Rockhold. And the rest is history. After a ten-year Octagon career, Michael Bisping finally put together the run to secure his legacy.

Twice a loser to the dominant and undefeated Ronda Rousey, who also happens to be her arch-rival, Miesha Tate finally climbed the mountain back at UFC 196. A true veteran of WMMA, Tate considered retirement after she promised title shot was given to Holly Holm.

However eventually her 4-0 run after the last Rousey defeat got her the last chance she clamoured for. In an emotional moment for all MMA fans, Tate submitted Holly Holm (herself somewhat of an unexpected champion after upsetting Rousey in Australia last year) in one of the most dramatic finishes in the history of the UFC.

After defeat in The Ultimate Fighter finale to a man who instantly moved down a weight class. TJ Dillashaw flew under the radar until Urijah Faber mentioned his name in the Octagon. Though his wins over Birmingham’s Vaughan Lee and the previously undefeated Hugo Viana were impressive, very few mentioned him in the title picture.

However, after his former friend and mentor Urijah Faber lost in his own title bid for the championship he recommended Dillashaw for the next shot. The UFC obliged, and at UFC 173 Dillashaw took on the all-conquering Renan Barao for the UFC Bantamweight title. After a dominant display, Dillashaw was not only hailed as an unlikely champion but was celebrating what Joe Rogan described as “the greatest performance (he) had ever seen”.

Saving the most prominent till last, New York’s Matt Serra was a journeyman with an 8-4 career record before he got 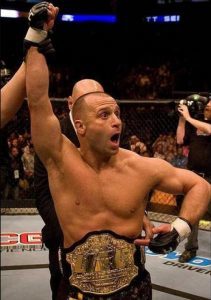 his chance on The Ultimate Fighter season 4. After being part of the cast for the UFC’s experimental TUF season. Which rather than unsigned fighters vying for a contract featured current UFC also-rans vying for a title shot.

During the Ultimate Fighter process, Serra avenged his first career loss to Shonie Carter and edged Chris Lytle in the finale. The win earned ‘The Terror’ a new $100,000 contract, a $100,000 sponsorship with Xyience and a shot at the reigning UFC Welterweight Champion. At the time, that was Matt Hughes, however, by the time Serra’s fight would come about. Georges St. Pierre had begun his reign and had looked fantastic doing so.

A -1000 favourite (meaning you would have to bet $1000 to win $100) GSP was expected to run through Serra and move on to rematches with BJ Penn and Matt Hughes. Matt Serra though had other ideas. He rocked St. Pierre midway through the first, and the fight was waved off at 3:25 after Serra refused to relent after he had ‘Rush’ rocking.

Serra was the new UFC Welterweight champion, winner of knockout of the night honours. And would later claim 2000s upset of the decade honours, to go with it. Though he would lose the title in the rematch, and never come close to scaling heights like those again, Matt Serra’s historic win had already secured his legacy.