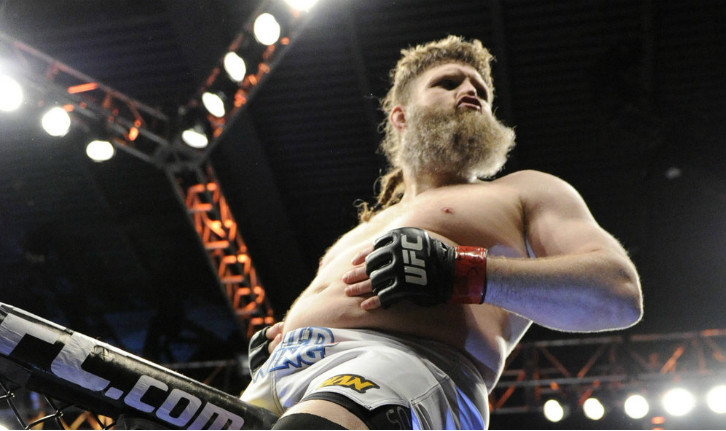 The UFC returned to Abu Dhabi on Friday almost 4 years to the day since the promotion’s last visit to the city. Fight Night 39’s intriguing card had something for everyone with knockouts, elite wrestling and technical jiu-jitsu all on display in the open-air du Arena.

A heavyweight bout between two of the division’s most popular fighters, Antonio “Minotauro” Nogueira and TUF 10 winner Roy Nelson headlined the event. “Big Nog” pressed forward at the start and used his five-inch reach advantage to work off his jab. A forceful right uppercut to the body followed by a trademark overhand right by “Big Country” rocked his opponent.

“Minotauro” managed to stay standing but looked considerably less sure-footed. The Brazilian stayed aggressive and had continued success with the jab. Nelson landed a beautiful three punch combo which wobbled “Big Nog”. One more haymaker overhand right from Nelson landed on the button and knocked “Minotauro” out cold.

Nelson was facing the prospect of three consecutive losses in the Octagon going into this fight. His victory secured his immediate future in the UFC and earned him a lucrative Performance of the Night bonus. Nogueira, on the other hand, has a big decision regarding his future in the sport.

The 37-year-old has over 15 years of experience in MMA and has nothing left to prove. This devastating loss was no doubt a demoralising one for “Big Nog” and perhaps that overhand right was the punch that retired the veteran.

A featherweight battle between former Strikeforce champion Clay Guida and Tatsuya Kawajiri provided the supporting act for the event. Guida clipped “Crusher” early with an overhand right before pouncing on his downed opponent and landing vicious ground and pound almost ending the fight.

Kawajiri recovered well and the pair clinched at the fence. “Crusher” immediately began trying to lock in an armbar submission but Guida responded by dumping his opponent to the mat. Guida scored another slam towards the end of the round and began thudding knees to the back of Kawajiri’s thighs at the fence. The round ended with Guida searching for a kimura after being taken down by Kawajiri.

Guida started the second round aggressively and worked off the jab. “The Carpenter” scored a takedown after an unsuccessful attempt by Kawajiri. They stood up and clinched at the fence while “Crusher” punished his opponent with a series of sharp elbows to the head.

Then in one of the strangest moments of the fight, Kawajiri scored some sort of piledriver move, slamming his opponent’s head into the canvas. Kawajiri continued to try kimura attempts while Guida maintained control with his wrestling prowess for the remainder of the round.

Both men traded hard right hooks early in the third with Guida having more success on the feet. Kawajiri shot for a takedown but Guida showed brilliant technique to stuff the attempt against the fence before escaping. The Japanese fighter missed with a wild spinning back fist attempt before landing a hard knee to the body forcing Guida to clinch.

“The Carpenter” then scored a takedown and the rest of the fight was played on the ground with Kawajiri searching an ultimately failing to get that elusive submission. Guida was given the unanimous decision victory with all three judges scoring the bout 30-27. The fight was given the Fight of the Night accolade.

Next, John Howard took on the undefeated Ryan LaFlare in the welterweight division. LaFlare landed a body kick and followed it up with a single leg takedown early in the first. The New Yorker landed a big knee to the head as they stood back up. A nice combo by Howard stunned LaFlare, but he was able to trip “Doomsday” back down to the mat. The round ended with both fighters showcasing their kickboxing skills.

A huge left hook followed by an uppercut wobbled LaFlare early in the second. Howard took him down to the ground but LaFlare got the sweep and almost gained top control before they stood back up. The pair clinched at the fence and LaFlare landed an unintentional knee to the groin which brought the fight to a halt for over four minutes.

Howard showed great resolve to continue the fight although he was immediately taken down after the restart. Howard landed a barrage of hooks and uppercuts in the closing moments of the round.

LaFlare fell to the mat at the start of the final round after eating a powerful low kick by Howard. LaFlare responded with another takedown. Howard escaped and landed a solid left hook as they stood back up.”Doomsday” showcased his superior stand up by landing a nice comb followed by a body kick before LaFlare took the fight to the mat again.

After both fighters traded reversals on the ground, LaFlare took Howard’s back. Howard clutched on to LaFlare’s leg and almost sunk in a knee lock before LaFlare escaped. LaFlare scored another take down and ended the fight on top. All three judges scored the fight 29-28 in favour of LaFlare.

After both fighters traded reversals on the ground, LaFlare took Howard’s back. Howard clutched on to LaFlare’s leg and almost sunk in a knee lock before LaFlare escaped. LaFlare scored another take down and ended the fight on top. All three judges scored the fight 29-28 in favour of LaFlare.

The opening fight of the night was a lightweight duel between TUF veteran Ramsey Nijem and undefeated prospect Beneil Dariush. The fight started at a blistering pace with Nijem scoring first with a right kick. Dariush returned fire with two straight lefts and a body kick which Nijem caught and used to score a takedown.

Nijem swarmed his opponent with devastating ground and pound before letting the Dariush stand back up. A clinch at the fence allowed Dariush to work his dirty boxing but “Stripper Ramsey” escaped and landed a big right hand counter.

A three-punch combo sent Dariush crashing down to the canvas, where he somehow survived more heavy ground and pound. Nijem continued to swarm his downed opponent with ground and pound until Dariush could no longer defend himself. The referee stepped in with 40 seconds left in the first round giving Nijem the TKO victory. Nijem was awarded the other Performance of the Night bonus.