Nobody Does UFC events better than Dublin

In recent years, it’s been quite rare in the Ultimate Fighting Championships frenetic schedule to get a period of some three weeks between events. We just had two cards back to back following the post-summer lull.

When the staff of the company make a collective sigh of relief and congratulate each other on completing another hectic fight schedule without any major glitches. Before jetting off to their respective destinations to take a well-earned rest.

Now the marketing machines are already back in overdrive as the promotion returns to Irish shores for UFC Dublin Fight Night 76. In what everyone hopes will become at the very least a yearly event in the capital. Hard to believe that it will be only the third time in some 6 years, fourth on these shores when you include Belfast back in 2007.

There’s no doubting that these protracted waits has led to an obvious pent up demand for the world’s biggest mixed martial arts promotion to once again grace us with its presence.

A certain part of me wonders if it were a more regular occurrence. Would the night still exude as much energy and unbridled passion for which it is now known? I really can’t say.

Just look at Vegas, the fight capital of the world. Where prelim fighters are lucky to have a few hardcore fans, plus friends and family in the house. Before the glut of those who are spoilt for choice wander in for the main card after cashing in their casino chips. Let’s hope we never get like that. 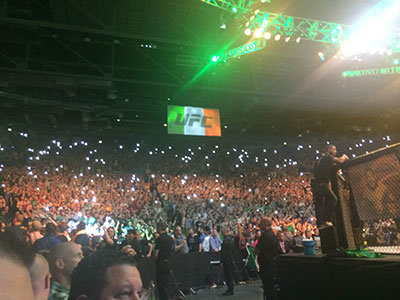 UFC Dublin itself is fast becoming one of the key events, not just on the European fight calendar.

But for the brand worldwide. With many venues and fans around the globe trying to live up to and emulate the atmosphere, in often much bigger arenas.

And with claims and counterclaims of decibel levels abound. There’s no doubting that there is something very special in the air when the octagon is illuminated on Irish soil.

With fighters from around the world calling to be put on the next card… few are chosen. Those requests would lead you to believe that the UFC Dublin card is something special for both those inside the cage, as out.

The boiling cauldron that will be the 3 Arena on October 24th is a prime example of our passion as a small fighting nation, always punching well above our weight, always giving it everything we can and enjoying the process.

The throw is our penchant for a few, just a few, sociable alcoholic beverages and the result is there for the whole world to see. Now if only the UFC could bottle that essence and bring it to each card throughout the world! Well, I suppose we wouldn’t be so special anymore now would be?

As I contemplating the mouth-watering night of action we have instore, while drumming up some ideas for this piece. Some lines from a Carly Simon classic sprang to mind. “Nobody does it better, makes me feel sad for the rest. Nobody does it, half as good as you. Baby, you’re the best….”

UFC Dublin is our one and only annual event… at least for now. So let’s make the most of it while we can. But you didn’t need to be told that anyway.