The Madness that was UFC 9 in MotorCity

May 17th 1996 saw the Ultimate Fighting Championship stage what remains even today as one of the strangest events in the promotion’s history. And there is no other place to start the story of why then the astonishingly dull main event.

At UFC 6: Clash Of The Titans (anybody else misses when the PPVs had silly names?) two of the UFC’s biggest names, Ken Shamrock and Dan Severn compete in the main event for Shamrock’s UFC Superfight Championship. Shamrock submitted his opponent with a guillotine choke in just 2 minutes and 14 seconds

Due to the way the UFC worked at the time, the Superfight champion would defend against the previous event’s tournament winner. Despite a comprehensive loss to Shamrock, Severn would come again at the equally hilariously named UFC: Ultimate Ultimate. ‘The Beast’ would defeat Paul Varelans, Tank Abbott and finally Oleg Taktarov all in one night to earn another crack at the title.

In the meantime, Shamrock’s time-limit draws with Taktarov, and a submission win over UFC 1 veteran Kimo Leopoldo had allowed him to keep his belt and set up the rematch in Severn’s home state of Michigan.

Before we get into this, we must first take a slight detour to discuss the legal status of our beautiful sport at the time this event was taking place. Arizona Senator John McCain (he of losing to Obama/discovering Sarah Palin/Human cock-fighting fame) was in the midst of a one-man campaign to banish the evils of ‘ultimate fighting’ as he no-doubt called it.

Following The Success Of UFC 8

He was very nearly successful three months previously, as the UFC just about managed to stage UFC 8 in Bayamón, Puerto Rico, and came closer still in Michigan. It reached 4:30 PM on the day of the event before the UFC was given confirmation the event could go ahead, but there would be a few ‘subtle’ rule changes. UFC owner Bob Meyrowitz agreed to hold the event with headbutts and, incredibly, punches made illegal.

As covered hereby Bloody Elbow, John McCarthy explained to the fighters that if they threw punches, they would be warned, and warned, and warned. And eventually, they would be fined ‘at (the UFC’s) leisure’. Now, whilst that undoubtedly is a license directly from the promoters to break the rules, Shamrock decided not to take it in order to set the right example for the youngsters in his adopted father’s academy. 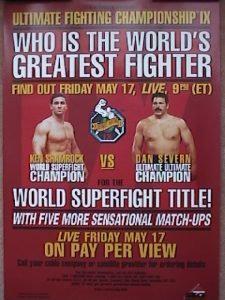 The fight went the full 30 minutes, and despite the fact that Severn wasn’t troubled by the ethical dilemma afflicting his opponent – much of it was still spent with the two circlings each other like a bad Bruce Lee movie; punctuated only by a takedown from Dan Severn and a brief period of top control by Shamrock.

Dan Severn gets The Split Decision

During which he couldn’t throw any punches. With the two dodging empty beer cups and hotdog rappers, Severn clinched a split decision. Most likely due to the face that he landed more punches – but punches were illegal, right? Whatever. Those of you with UFC Fight Pass and an insomnia problem can click here to watch it.

Away from the main event, the rest of UFC 9 was a doozy. One of Severn’s wrestling students from his time as an assistant coach at Arizona State University, Don Frye was in action. Frye was 3-0 in his MMA career at the time, having just won the UFC 8 tournament.

He spent the first few minutes defending a single against highly accomplished BJJ black belt Amaury Bitetti before proceeding to ground-and-pound his face off from closed guard. Frye finished the fight by dropping knees from north-south (legal in those days, calm down guys) and a smattering of punches that forced Big John to stop the fight just before the 10-minute mark.

American Kickboxer Mark ‘The Cobra’ Hall took on Japanese Yokozuna Sumo Wrestler, Koji Kitao, who as you can see from the broadcast screenshot below, was strongly fancied by the UFC. 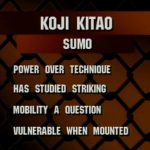 Hall broke Kitao’s nose a few seconds into the bout, Big John noticed it at the 45-second mark and waved the fight off. Elsewhere, Nebraska native Matt Andersen was stopped on the feet by Nova União heavyweight Rafael Carino.

Yeah, it was punched, I know, I know, it was the 90s. Becoming the third fight on the card with TKO (punches) as its official result was Cal Worsham’s early win over UFC 1 veteran Zane Frazier.

The End of Their MMA Careers at UFC 9

Whilst Steve Nelmark, whom Tank Abbott made famous with a brutal knockout at UFC: Ultimate Ultimate (again with the names) took down Tai Bowden and pummelled him into a doctor’s stoppage. Both men would return at Ultimate Ultimate, and it was that night in Alabama where their MMA careers would end.

There was one more notable fight on the card though, and it is one that lives on in MMA folklore. As Dave Beneteau was preparing to face Gary Goodridge, he broke his hand about a month out from the fight and was replaced by a training partner. That training partner, was legendary wrestler, former Olympic and double World Freestyle Champion, Mark Schultz.

Now those of you who watched Foxcatcher may wonder what the fuss is about having an alcoholic, coke user who was maybe a little bit gay compete. But in reality, those were just a few of the glaring errors in that movie. Foxcatcher made Mark Schultz look like a loser compared to his brother, Dave, but that could not have been further from the case. Mark Schultz was a monster. 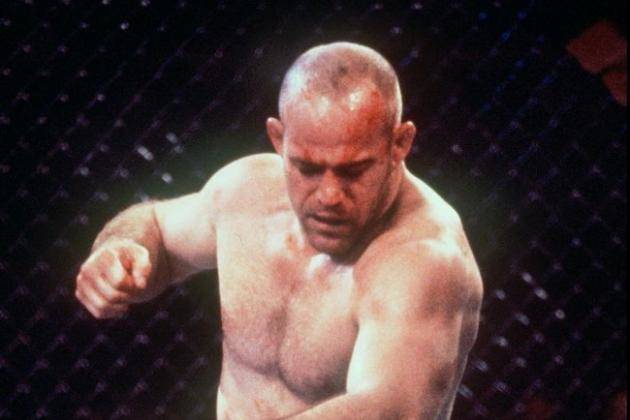 Schultz came in absolutely shredded, in phenomenal shape and off the back of extensive training with both Rickson Gracie and one of Rickson’s black belts, Pedro Sauer.

Though his opponent was 40 pounds heavier, had just reached the final of the UFC 8 tournament, and would go on to have a storied career both in the US and in Japan under the Pride banner, Schultz shot in early and took him down with ease.

Though Goodridge did an excellent job at preventing Schultz from posturing up, Mark was able to land some heavy shots to the body that eventually allowed him to pass to side control. A cut opened, and John McCarthy stood the fight up.

This allowed the Detroit audience another chance to see Schultz shoot in with an Olympic-calibre takedown. The same proceeded to happen, and when the fight was re-started for the 2nd time after Goodridge’s cut was cleaned up, Schultz’s third takedown was the most spectacular of the lot.

This time, he did manage to posture up, and rained down a barrage of illegal punches, serenaded by Big John screaming “Open hands! Open hands!” The fight would be stopped at the end of the first 12 minute round, as Big Daddy’s cut was pouring. A dominant performance by Schultz that has left UFC fans wistfully wondering what might have been ever since.