So, it is Monday morning after the weekend that was. A fight that had promised so much, and actually delivered more than even the experts dared to imagine. Conor McGregor and Nate Diaz went to war. They put everything (and maybe too much) on the line for victory and for our enjoyment.

Elite athletes get a look in their eye when they are in the zone and Conor had that. He even threw in a Vince McMahon power walk when he entered the cage. Thus winding up millions of pro wrestling fans, and putting a future Wrestlemania payday a certainty.

Diaz was a little less calm looking than usual. This was the big moment for him. No big brother in his corner, he was out there on his own to take on the biggest name in MMA.

The face-off kept the theme up. Diaz was bouncing around, keeping his eyes on McGregor while McGregor was calm, still and unmoving. No hand touching and we were off. 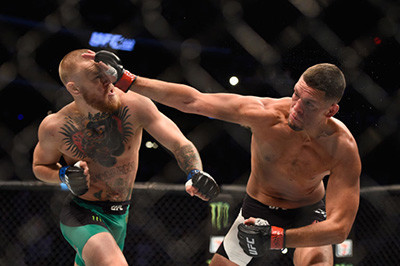 Round 1 couldn’t have gone any better for McGregor. The GPS was locked into Nate’s lead leg. The one weakness that Nate has is his stance; it’s a boxing stance that doesn’t always work in MMA. It looked like Diaz was either cold or was expecting a similar game plan from McGregor.

That being to throw everything behind every left-hand punch until the tank empties. It was clear from the offset that team SBG had been working hard on the Diaz puzzle. Down Diaz goes under pressure and it is a 10-9 round. Some people have said 10-8, but Diaz was never in trouble enough to warrant that score.

Round 2 kicks off following the same lines. McGregor was hitting Diaz at will. Minimal resistance from Nate Diaz. His ability to take a punch was his safety blanket here. He knew Conor couldn’t knock him out, down yes but not out. Every second leg kick was connecting very hard. Diaz was put down again by another left hand.

Diaz left his left foot out in an attempt to hook McGregor, but Conor was staying away from the ground, keeping the fight on his terms. The fight was looking to be heading to a landslide for Conor, and then with a minute and a half left in the round, Diaz woke up. He walked forward and started throwing the Diaz volume that we all expected.

It was seriously impressive to watch because at this stage he was opened up like a Freddie Kruger film. This was the time to find out if the training was going to work for McGregor. The bell ends the round. McGregor took damage but slipped the main punches. He was never in trouble, but he wasn’t fighting back as much as he should have.

The round was another 10-9 to McGregor on my scorecard. Diaz did make a comeback but he didn’t do enough to win the round.
McGregor up by 2 rounds at this stage. But how was the gas tank?

Into Round 3 We Go

Round 3 kicked off with Diaz pushing McGregor up against the cage and bossing him. He did attempt numerous takedowns but wasn’t successful any time. The McGregor team had been working hard on this. Diaz never got close to a takedown but he was in control all the way through. 10-9 Diaz.

Again, some gave it 10-8 Diaz but for me, there wasn’t a takedown or a knockdown here to get that extra point. We are now 2 rounds to 1 for McGregor, but the momentum had shifted to Diaz completely.

Round 4 kicks off with McGregor getting back to the game plan. Leg kicks came back. Both fighters were obviously tired. Whenever Diaz pushed Conor against the cage it usually ended in a punch coming back at him upon separation. This was the biggest difference in this round.

Anytime there was space generated, McGregor managed to get a hand on Diaz, who was opened up like a Christmas turkey by this stage. Still walking forward, but he was bleeding heavily. McGregor finished the round stronger; Diaz was looking like he was fading. 10-9 McGregor. No question. Final round, both fighters were exhausted. This was a different level of fighting.

It starts with Diaz walking forward into a big knee. Diaz catches it and pushes Conor into the fence. They both worked hard and McGregor reversed it after some time. Again, upon separation, Conor cracked Diaz with another punch. That one hurt! McGregor walks away, obviously dead tired.

Diaz chased wanting a clinch. Anther takedown attempt was blocked by Conor. His work in the clinch has been really impressive in this fight. Diaz gets a few strikes in and McGregor is clock watching. 90 seconds left.

McGregor Gets the Takedown 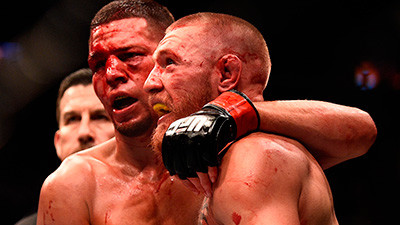 McGregor with the takedown, Diaz back up. How are they still going like this? Unreal! Diaz throws a few short punches and manages to get his only takedown of the fight. The fight finished with Diaz on top trying to connect with punches. 10-9 Diaz.

I was on my feet at this stage. I originally had it with McGregor winning by 3 rounds to 2, but I had a feeling that a draw being announced.
Both fighters embraced post-fight which is what this sport is about. They left everything and more in there.

There it was. A fair result (even with me trying to take my green-tinted glasses off). Diaz is a bigger star and McGregor is now so far ahead of everyone else in the sport in terms of stardom, that he can write his own cheque in 3 different sports.

If I was wearing a hat at 5 am Sunday morning, I would have tipped it to both fighters.

@nkeegan for debate, discussion and derision.