It’s fight week! This Saturday night, two of MMA’s biggest stars will collide when Nate Diaz and Conor McGregor look to settle the score at UFC 202. If you’re a long time combat sports fan the feeling this week will be nothing new to you. The hype and anticipation slowly but surely fill our brains as we get closer and closer to fight night. However, sometimes we don’t really appreciate it all as we’re too focused on what’s to come.

When I mentally revisit all of the great fights I’ve watched, I always try to remind myself of the way the MMA world, myself included, felt heading in. When the action comes to a halt, it’s easy to forget what we all expected to happen. A perfect example would probably be that I felt McGregor would win at UFC 196 but now I’m pretty confident that Diaz gets it done again this weekend at 202. Within ten minutes my thoughts on their style match changed completely.

Speaking of 196, if you were to watch those two headline fights without context you may not get the same feelings many of us did. When I re-watch 196, I remember the way people doubted Nate, I remember the way people counted out Miesha Tate. I did both of those things, it’s knowing that though that makes me appreciate those fights even more. When you can really repaint the picture of an event, that’s when it becomes unforgettable.

UFC 202 Is Everything We Love About Big Fights

This coming 202 fight week represents everything we love about the big fights. The main event fighters bring personality, colour and aggression, both in the cage and out. The undercard is littered with fighters who bring excitement with every octagon entry. With every big fight comes a split in the fan base as both sides passionately display their arguments with passion. People go back and forth, hundreds are blocked on twitter but few ever agree. The discussion for this fight has been almost unprecedented.

And then when the combat is finished, everyone forgets. Some gloat, some have to accept they were wrong and then we’re on to the next one. That’s not a criticism either, I love that aspect. I love the fact that even though we all know this sport is obscenely unpredictable, we all pretend to know what will happen this time. The truth is, sometimes very strange things occur in high-level fights, sometimes no analysis is enough.

The reality of a sport like MMA is that there is an astonishing amount of factors that go into every fight. Consider all of the factors of the fight itself first, the different scenarios, the different styles. That’s crazy enough. Then add in everything else. The training camp, the mentality, the gameplan, the health. It’s the juggling of all of these factors that leads to such shocking results. Such startling surprises, such incredible drama. 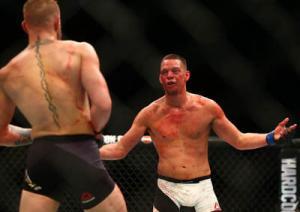 The best part of fight week is considering the factors that are already apparent to us. For example, can Conor use low kicks to slow Diaz? Can Diaz get off to a quick start, can Conor hurt Nate? The questions that we ask before a fight are often due to the things we already know.

We know Nate has had issues with low kicks before but we also know Nate took all of Conor’s best shots last time. When we truly understand someone’s strengths and weaknesses it can sometimes create for more fascinating questions than the unknown ever could. The UFC 202 main event is a great example of that.

Throughout a big fight week, our thoughts can change rapidly. Interviews can sway us either way whether it be perceived confidence or arrogance. Weigh-ins make us rethink as we see fighters look perfect or weak and drained. We watch every single idiosyncrasy of our headliners as we look for some insight into what’s to come. We all want answers or at the very least clues but at the end of the day, it can all be rendered pointless in an instant on fight night. Don’t expect UFC 202 to be any different.

When It’s Finally Time To Throw Down

It’s these questions and factors that make that indescribable moment so special. If you’re reading this, you probably know the one I’m referencing. That moment when the introductions are done and the two fighters meet in the middle. That moment when they go back to their corners before go time. When everyone in the arena cheers. When everyone at home takes a deep breath and leans forward a little. That’s why we watch, that feeling. It’s just so special.

So as UFC 202 approaches, let your mind race. Consider all of the possibilities. Think about the styles match. Enjoy the trash talk. Just embrace it. Fight weeks like this one are rare, there’s such a blend of styles both on the microphone and in the cage. Matchups like this Saturday’s main event are to be truly appreciated. Two superstars, two greats, two warriors. There will only be one winner though and we’ll find out the answer to that question Saturday as in the end, that’s always the ultimate question.

Images courtesy of foxsports.com and usatoday.com