So, here we have it. UFC 200, the biggest fight card in the history of our sport. Stacked with star power from top to bottom. From Jim Miller’s fight with Takanori Gomi to a battle between two serial bonus collectors in Diego Sanchez and Joe Lauzon – and that’s only on the Fightpass prelims.

Usually, when we do these pieces I use my section to hype the interesting fights on the card, but to do that here, we’d be running out of column inches. Two title fights will take place, the most prominent of which sees longtime UFC Light Heavyweight champion Jon Jones attempt to come full circle and regain the belt he never lost following his hit-and-run incident. 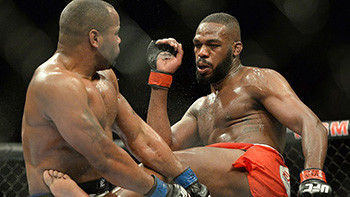 Though he has a win over Daniel Cormierbefore, the Olympic wrestler has since defeated the next two challengers and proved himself as the next best in the division. The UFC 200 main event will decide the legacy of two of the great mixed martial artists of this generation.

Speaking of legacy, Miesha Tate returns to defend the belt she won so dramatically back at UFC 196. She faces the rising, and dangerous Amanda Nunes and poses a terrifying banana skin on Tate’s road to big money rematches with Holly Holm, and her arch-rival, Ronda Rousey. Before that, another title will be handed out, this time an interim belt.

Jose Aldo, returning for the first time since a comprehensive knockout defeat to Conor McGregor, rematches his UFC 156 opponent, Frankie Edgar. They put on an epic 5 round Fight of the Night winner, which Aldo edged that night.

Jose Aldo was imperious 3 and a half years ago, but the question we have to ask is this, is he the same fighter? If he’s not, then an ever-improving Frankie Edgar might have too much for him, as he looks to join an elite group to have won UFC titles in separate divisions.

I wondered if without Conor McGregor, or without Ronda Rousey or Georges St. Pierre if this card would feel somewhat empty. And for a while, it did, until Ariel Helwani controversially revealed during UFC 199 that the biggest PPV draw in the history of the business would be sensationally returning.

Brock Lesnar, the headliner of UFC 100 returns from the pro-wrestling wilderness to give his MMA career some much-needed closure. Though heavily unfancied, his bout with Mark Hunt is as box office as any in recent memory.

With Cain Velasquez also returning, Ultimate Fighter winners Kelvin Gastelum and Juliana Peña and former UFC Champions Johny Hendricks and T.J Dillashaw on the card, as well as young stud Sage Northcutt looking to bounce back from his first-ever career defeat, UFC 200 is shaping up to be the biggest event in our sport’s history. Don’t dare miss it.

UFC 200, where do I begin? On paper, this may be the best card in UFC history. From top to bottom this card is fantastic and offers fans a variety of stylistically interesting matchups. Depth is a word that comes to mind when looking over this card, and I’ll surely leave out some great fights in my brief discussion of the card.

To begin, the early Fight Pass Prelims sees the up and coming and always exciting Thiago Santos facing off against a veteran in the sport and number eight ranked middleweight Gegard Mousasi. I see this one finishing in exciting fashion with Santos getting a TKO/KO win over Mousasi and solidifying himself as a threat in the UFC’s middleweight division.

Next, we have the FS1 Prelims which hosts four fights, two of which entertain two former champions in Johny Hendricks and TJ Dillashaw. They say it’s hard to get to the top and even harder to stay there. We saw Hendricks fall from the pinnacle of the sport with a controversial loss at the hands of current champ Robbie Lawler, and it seems momentum is going the wrong way for him at the moment.

With a lacklustre performance in his previous fight against Stephen “Wonderboy” Thompson, this fight with Kelvin Gastelum is an extremely important one for the ex-champion future in the sport and carries the potential to propel him back to the upper part of the division.

The same holds true for TJ Dillashaw, a loss against Raphael Assuncao would surely postpone the highly anticipated rematch with Bantamweight champion Dominick Cruz. However, I strongly believe Dillashaw will get the win.

Finally, this MMA Mick’s writer is most looking forward to Jose Aldo and Frankie Edgar rematch.

Apart of me wants to see Aldo get the win and rematch Conor McGregor (if he ever comes back to fight in the Featherweight division). It would be interesting to see how a fight lasting longer between the two would play out. On the other hand, Frankie Edgar is an extremely well-deserving contender and has been on an absolute tear beating some of the division’s best since his closely touted loss to Aldo three years ago.

I hate to be a negative Nancy, but! Is this really the greatest “main card” in UFC history? More to the point, are you intrigued by the potential outcomes? Seems to me in many of these fights at least on paper have already been decided… And I know, I know… this is MMA and anything can happen and perhaps will. But personally, I’m not overly excited. (shout out to Public Enemy)

Remember this card was originally being headlined by McGregor vs Diaz II… yes I know. So that fight went awry and we ended up with the main event fit for such a landmark event.

Jon Jones dominated Daniel Cormier in there first fight. Winning in decisive fashion against the formerly undefeated fighter. What will Cormier do differently this time around to ensure he retains his belt. Jones has looked unbeatable throughout his relatively short UFC career. Can Cormier really take him somewhere he hasn’t already been before?

Mark Hunt a top contender in the heavyweight division as recently as November 2014. Up against the former champion Brock Lesnar who hasn’t fought in 5 years. Hunto San should dispense with Lesnar and let that be that. How will the hulking WWE star deal with Hunts knockout power? And area Lesnar hasn’t fared so well in, in the past. Win lose or draw it’s a road to nowhere.

Miesha Tate has acknowledged that the people are expecting the Nunes fight to be an easy title defence. Of course, she’s doing her best to dispel those arguments and make things interesting. Perhaps Nunes can pull the upset and shake up the bantamweight division yet again. A regular occurrence since the dethroning of Ronda Rousey.

Frankie Edgar taking on the former champion Jose Aldo junior. Now one thing we know about these two fighters is that nothing will change in terms of skillset going into this fight. We know what both fighters will bring and how they match up stylistically. Following his crushing title loss to current champion Conor McGregor, will we get an Aldo who is but a shell of his former self?

Can Frankie Edgar Turn Back The Clock?

Or will see a resurgent fighter who dominated his weight class for over a decade? At 29 he has the jump on the 34-year-old Edgar who must be looking at this as his last opportunity to claim the belt. Before falling into what we might call Faberland… that place where fighters go when there is nowhere else to turn…

I think there’s a lot more excitement on the undercard of this tent pole event. With the return of  Cain Velasquez vs Travis Browne. Cain was the supposed unbeatable champ, who cannot manage to stay injury-free. Will his legacy be yet another, if only?

Diego Sanchez vs Joe Lauzon. Dammit, I’m a sucker for these fights. Two guys who have been around forever. A hard task in an organisation where fighters are routinely kicked to the curb. Just goes to show you how highly both the promotion and fans rate these stalwarts of the UFC roster. Did someone say all-out war? 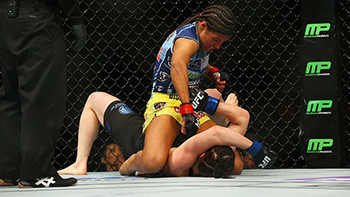 Cat Zingano vs Julianna Penna. Penna looked awesome on TUF and was surely destined for great things. Throw in an almost career-ending injury and you have another what-if story.

She faces the toughest test of her career in the veteran Alpha Cat Zingano. If she can get past her, well then that will confirm just how good the Venezuelan Vixen really is. Expecting a hard-fought win for this one.

The former champion TJ Dillashaw manages to slip in on the undercard? With a rematch against Raphael Assuncao, a guy who has already beaten him once. He loses again here and he may very well find himself way at the back of the title cue.