So now it is time to exhale. Last week was a roller coaster of emotion in MMA and the relaxing of this week is like an ice bath after training. It feels strange but good. I’ll be honest with you. I didn’t stay up. I was training on Saturday and was on the verge of full-on body failure so I was in bed early. I did watch UFC 200 first thing on Sunday morning and here are my thoughts.

Aldo looked like he was back to his best. He physically looked near his best (cough cough) and he dealt with Edgar on every level. Edgar was coming in off a winning streak and was at the top of his game. You could see that he felt like it was going to be a different fight to their first. He tried but was just a level below Aldo.

Edgar is a great fighter but Aldo is elite. As an aside, the picture of McGregor standing up watching this fight was amazing. No one in the arena was telling him to sit down. I remember watching the dark knight in the cinema and someone stood up in front of me, I had no problem telling them to sit down. Safe to say it wasn’t Conor McGregor.

That rematch will be epic. Aldo feels good, but he also knows that it can be over in an instant with that left honey punch from Conor. A lot of questions, firstly how is Conor going to drop all of that weight to get back to 145? More on that in the months to come. 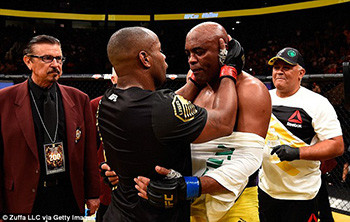 Daniel Cormier attempted to put the weekend from hell behind him and step into the cage with the greatest fighter of all time *who got popped for steroids and erection pills. Anderson Silva is fantastic. Even with no training, he scares everyone. Always fantastic to watch. DC did what he had to do and won fairly handily.

The tide was turning slightly when Anderson stuck his big toes in between his midribs, but that was the third round and too late. I do not understand people booing DC, it is ridiculous. He is a champion who took a fight that 99% of people wouldn’t take. I would like to see this fight with both fighters having a full camp. It would be a great one.

Then we had Brock Lesnar and Mark Hunt. Captain concussion versus the beast. Hunt didn’t look his normal self coming out and then the lights went out and enter sandman blared over the speakers. Brock had a look on his face that was similar to the look he would have if he caught you slapping his wife on the bum. He was ready to go. I had forgotten how fast Lesnar was/is.

That first takedown was as quick as any bantamweight fighter. Unreal from someone so big. He bossed around one fairly easily. That surprised everyone. Round 2 he got tired. Stayed at distance and got through the round. In the third, he got on top again and made a sound that was just horrific while punching Hunt on the head while on top.

Brock Lesnar Worth His Weight In Gold

With that win, Brock has become the most valuable fighter/athlete/wrestler in history. He now writes his own cheques in 2 companies worth in excess of a billion dollars.

Then it was time for the main event at UFC 200, Tate v Nunes. Tate looked like she didn’t want to be there. Nunes looked like someone with nothing to lose. You could tell that this was the way it was going to go. Tate had an awful weight cut that involved her having to do a nude weigh-in (something I have been known to do even while on weight).

Nunes was always going to start quick and fade, the question was, and can Tate handle the initial onslaught and grow into the fight in the later rounds? The answer was no. Nunes put a beating on Tate which was amazing to watch. The punch choice was spectacular, the consistency of her attack was fantastic and Tate has zero answers. I think Tate thought this would be easy, this explains the bad weight cut. With this, Tate has ruined at least 2 massive paydays for herself.

The lesson from this, at every level, never take an opponent lightly.
So now it’s time to relax a bit and keep calm until UFC 202. I imagine that there will be ups and downs until then.

As usual @nkeegan for debate