So, have you heard any news lately?

If someone came up to you and said that the main event of UFC 200 is off due to a failed drugs test, you wouldn’t believe it. You wouldn’t believe that a fighter would be so stupid as to put themselves in a position to cost them a frightening amount of money, a world title and most importantly (in this case) the bragging rights of beating your biggest rival.

But that is exactly what has happened. Our favourite constant mistake maker, Jon Jones has been served with a potential USADA test violation 3 days away from the biggest fight of his life. Most have just written it off as stupidity, but I think there might be something more to this. Before we get to my theory, I used to think that potential violations shouldn’t be made public. But after research, a potential violation follows a huge amount of testing on the sample. They announce it when they are 99% sure. This is the same as the Chad Mendes failure 2 weeks ago.

Now, to my theory. Do you think Jones really wanted this fight? Do you think that maybe Jones felt so far away from his best after the OSP fight that he was looking for a way out? He is not stupid he is far from stupid. His team know exactly what is on the banned list and what is allowed. He is more tightly controlled now than ever, and yet this still happens. I think that Jones wanted a way out without losing to DC. 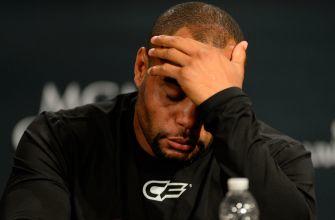 I think he knew he was going to lose if Daniel Cormier was fit. He had seen the huge improvements in the champion since their last fight; he had seen the wars that DC went through, and that along with seeing his own skills diminish he wanted a way out without losing.

In his mind he still has a win over the champ and hasn’t been beaten by him, this will be the next thing he says. After the fake press conference where he talks about mistakes, asks for forgiveness and promises to be back, he will be putting up Instagrams espousing never losing to Cormier.

I am gutted for Cormier. This was his moment to exorcise his demon. The one blemish on his record. He knew he was in a position to do that. The work was done, the weight was made and it was all for nothing. The mental aspect is the biggest worry. How will this let down affect him? This was his moment and it was taken away from him.

The money aspect isn’t an issue. If he was due to get $4-5 million, he will get that from the UFC down the line somewhere. But who else can he fight? Who is the next in line?

With that out of the way, we have Lesnar v Hunt. The beast versus captain concussion. Hunt can stop a Volkswagen with his right hand and Lesnar can…….what can Lesnar do? He is a genetic freak,  he is an elite athlete and if this was the Middle Ages we would all be cutting his grass. But in terms of MMA, what is he?

Brock Lesnar Is Not The Same Fighter

At 39 he is not as quick as he was. He isn’t as strong as he was. His technique wouldn’t have improved as he hasn’t had a proper camp. That along with the break from the cage puts him in the crosshairs of defeat. If he charges across the ring, Hunt will snap him. If he tries to keep Hunt away with a big paw, Hunt will walk through it and snap him.

As much as I want Lesnar to win, I just don’t see how he gets the W. Either way, I’ll be sneaking around my house like a ninja watching the UFC 200 event. They have my money!

@nkeegan if you want to debate, shout or discuss the above.