After an internet ordered few weeks of silence I am back. And what a time to come back. The dust is still settling on UFC 196 and people are rubbing their eyes in disbelief. Some are rubbing their hands in glee, but that is another story.

Going into the event there were 2 main events. Holly Holm against Meisha Tate and Conor McGregor v Rafael Dos Anjos. As with life, the women were more dependable and was never in doubt. Maybe they train better or maybe women are stronger than men, I don’t know which but they were never a doubt to make the walk.

The main issue was always going to be Brazilian. The best joke I have heard is ‘why do Brazilians never need contraception? because they always pull out’. Now that might be a bit risqué for MMA Micks but you see where the worry was coming from.

And with the last kick of the last sparring session before going into the last week of media, Dos Anjos breaks his foot and is out. Immediately I wanted Diaz. Firstly because he is a stronger test at the higher weight and (more selfishly) I wanted to see them both on the mic.

They were epic at the press conference, with Diaz being a little bit more subdued than usual, his mind games started early.

Fight week came and I became more and more worried about Diaz and his calmness. What did he know? McGregor was his usual self which is always fantastic. You never are on the fence with him. You either love him or hate him. And that is the point (more on that later)

Then at 4:30 am on Sunday morning, my alarm went off and my ninja’s skills were in full effect. I clicked on the UFC app and watch Ilir Latifi v Gian Villante. Latifi is becoming my favourite fighter, he is just a Volkswagen of a fella.

Complete beast. He did look a bit lighter and less conditioned than usual, but he got the decision. On balance I think it was the right call, but by no means was it easy. More work needed but he is a contender.

Then came the women. (Not a sentence a man says very often). Both looked ready for war. We could see the game plan and we knew it coming in. Holly is an elite striker. She was going to try and knock Tate’s head off. Meisha, on the other hand, is a jack (or jackeen) of all trades.

She was going to try and get Holm on the ground and grind her out. This was a smart plan, knowing that we haven’t seen Holm on her back before and it was the one spot she had an advantage. 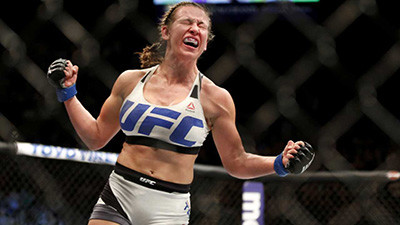 The first round was fairly even, the usual feeling out process. Then the second round came. Tate got a takedown and was milliseconds from winning the fight.

The first chink in the champion’s armour was established. Tate now knew that if she could get Holm down she could win. And the champ new that too.

Holm was aggressive yet cautious for the next couple of rounds. I think coming into r5 she was up 3rounds to 1, but the second round was a 10-8 for Tate and judges aren’t the easiest to understand. It was going along with Tate looking for the takedown and not getting it.

And then, she got it! It was a Paul O’Connell takedown. Just grab the opponent and drop to the ground dragging the opponent with you. Holm could escape and she knew it. Tate locked in the rear-naked choke and Holm tried to flip. Tate hung on, sunk it in and Holm went to sleep.

The bravery from Holm to not tap was applauded from my bed. Unreal warrior performance from both. As soon as Tate won, Rousey got brave and said she wanted to fight again. Showing that she’s just another bully. If Holm had won, Dana Whites phone would not have rung. So its Tate v Rousey next and I hope Tate wins, by armbar.

Then out came the second main event. Diaz looked ready to go as did McGregor. They had words before the bell and before we knew it the fight was on. Both fighters looked loose and both connected. McGregor landed a few hard shots and then a few more with Diaz returning with the Stockton slap.

Diaz was cut open and McGregor looked frustrated. Some of those shots where big and Diaz didn’t take a backwards step. I think the realisation of the higher weight class hit Conor at the end of the first round. Diaz was a mess but not moving. The Diaz brothers need to be killed to be beaten and Conor was only hurting Nate. More punches where needed.

But the gas was the issue. 25 extra pounds on his frame cost him. The slap right followed by the hard straight left from Diaz were finding a home on McGregor’s face. These were hurting him and he just didn’t have the gas to react. There where 2 shifts in momentum in round 2.

Diaz on top then McGregor then Diaz again. Only when Diaz got back on top we knew it was nearing the end. And I think, so did the fighters. The finish was about as sexy as jiu-jitsu gets. Conor goes for a takedown, Diaz gets the neck, Conor rolls and then Diaz snaps on the rear-naked choke.

Conor tapped and that was it. No shame in tapping. Diaz fought an amazing fight, took a lot of punishment and deserved his victory.

Now it looks like Conor goes back to 145 and Diaz fights Dos Anjos. As much as I pray at the altar of the Notorious one I would like him to take a break and enjoy spending a lot of his money without worrying about camps, fights or weights.

Go to an island with the missus and drink cocktails in the sun for a while because he has kept the game going for the last 2 years. I don’t think that will happen though, I think its UFC 200 against Edgar or Aldo. After Aldo putting up that message on twitter, I want Edgar. It’s so easy to kick someone when they are down, especially after they put you down in 13 seconds!

To close, I am going to talk about the reaction to the McGregor loss. People are laying it on very thick about the loss. These people don’t realise that they fell, hook line and sinker, for the gimmick. The flash the cash McGregor.

You never changed the channel when he was on. Either you wanted him to be the best ever or to be beaten. And that is where he had you! Ewan McKenna who mainly writes about football spoke about McGregor as if he knew anything about the subject. McGregor is so good at his job that he makes sports journalists into fanboys. It was amazing to see.

So for all of you who revelled in the defeat of someone who put their body on the line in the cage, go to your local MMA club and do 3 sessions. You won’t get hurt; they will take care of and respect you but go train. I promise you won’t survive the first one and a tiny number of you will return for more.

As usual, you can find me @nkeegan. Maybe you’ll come training with me?