Not talking about the backlash against anyone, end of the day, he went up 25lb to fight a serious fighter at that weight. Won the first but wasn’t used to the weight and was beaten. End of….let’s move on from UFC 196.

So what now? Will there be rematches after the big 2 main events? Will the UFC find new matches for each?
Well, I would firstly, thank all of the gods that the 2 main events happened. The women were always going to show, no doubt.

The fellas when they see their names opposite Conor McGregor withdraw quicker than I did……….but that’s another blog for another site. So for Diaz, as the victor, he should get the title shot right? That’s the money match. He was hammered by Dos Anjos (well a much bigger Dos Anjos hint hint) the last time they fought.

He might be a bit too small to fight Robbie Lawler, although you can never count a Diaz out of any fight. So what happens? Well, how about this, how about Nate Diaz v Georges St Pierre!??? To me, that is all kinds of fun. St Pierre will be the professional, saying the right things and trying to make us think Nate hasn’t gotten into his head. 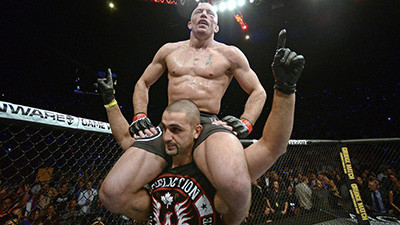 And Nate will be the Diaz we all love. It will be a fairly even fight. In his prime Georges steamrolls Diaz. But he hasn’t fought in years.

The allure of UFC 200 and millions of PPV buys in his pocket may be just the thing to tempt him back. The pre-fight will be worth the money alone. I think Diaz wins it.

And What About Conor McGregor?

And what for Conor McGregor? Should he stay up at 170? Go back to 145 or go after the 155 title? It is completely up to him because even after the loss, he drew 1.5 million buys. And as much as I would love this to be a sport where wins and losses count, it is a business first and McGregor is still the golden Crumlin Goose.

He can make 145 and fight there, but I would rather see him eating the odd steak in between the salad and get the fight with Dos Anjos at 155. Aldo shouldn’t be entertained; he is talking all sorts of smack but was put out in 13 seconds.

Even on my worst day, I have never done anything for that little amount of time. He is another fighter who has looked smaller since the testing has come in. I am not saying he was on anything, but……

So for me, it is 155 v Dos Anjos 5 round war! Shut up another Brazilian and take home another belt.
As for the women, it is a bit more difficult. I am delighted for Tate to have won. Gutted for Holly and annoyed that Ronda is back on the scene. Ronda is a beast, elite and unreal athlete.

But she has appeared to be a bully lately and is only in training because Tate won and she thinks she can beat her. That is the only reason. If Holm had won Ronda would not have replied with the ‘its time I got back to work’ text to Dana.

But this being business, Ronda gets the shot against Tate, another massive fight for a company rolling in so much money that it is unreal. Not to mention Jon Jones and Cormier in April. I really want Cormier to win, but you can never bet against Jones.

If he cannot get arrested or do something stupid, he will resume at the top of the division and be unbeaten until his next arrest. Cause as Rick James said, “cocaine is one helluva drug…..”