With such a highly anticipated night of action ahead at UFC 194. We felt it was only right to get the thoughts from some of our writers on what they are looking forward and what they expect from the momentous occasion, read on…

I’m not even going to write about the two main events, because I think they’ve been beaten to death. What I’m most interested in seeing is the outcome of the Ronaldo Souza and Yoel Romero fight. I think this one is going to be a war and potentially fight of the night. The winner of this matchup will almost definitely get a chance to fight the winner of Weidman and Rockhold.

The next fight UFC 194 I’m excited to see is hopefully going to be a mixed martial arts jiu-jitsu clinic as Demian Maia is set to face off against Gunnar Nelson. Both have world-class grappling skills, with Maia having a slight advantage. It will be interesting to see if Gunnar will test himself on the ground with such a high-level ground fighter in Maia.

Whether you’re a Conor McGregor mark or not, the power and presence he brings to mixed martial arts in 2015 are absolutely undeniable. Purely from a business standpoint, in an era after Brock Lesnar, after Georges St. Pierre, after Chael Sonnen; the new needle-movers are of vital importance. And after what we just saw Holly Holm do to Ronda Rousey – Conor McGregor is that guy. But this is not just the Conor McGregor show; Jose Aldo is approaching 10 years undefeated. He has been consensus top #3 Pound for Pound since 2009. Jose Aldo is as legit as they come – and everyone knows it. 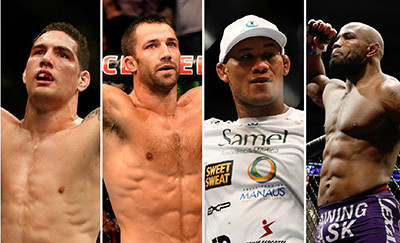 It feels like we have been waiting a lifetime for this card. The original World tour builds up to 189 got us all to a fever pitch, only for it to slip away. Not taking anything from that night or the main event, it was awesome. But the fans, the world, wanted to see Jose Aldo inside that cage.

Now all these months later, after all that has been said. The changes in the landscape of the featherweight division now if anything makes this fight even bigger. Adding to the massive main event we also see Chris Weidman stepping in against what many think maybe his toughest test to date. It’s hard to bet against Weidman, but Rockhold does present a pretty good case.

Like the icing on the UFC 194 cake, we have two another cracker in Romero vs Souza. In what is obviously a spot for the number one contender. Mia vs Nelson should be an absolute joy to watch for those groundwork aficionados say, just as we get a knockout. Holloway, Stephens… this card just feels so right, let’s hope each and every fighter makes it to the weekend in good health. History awaits.