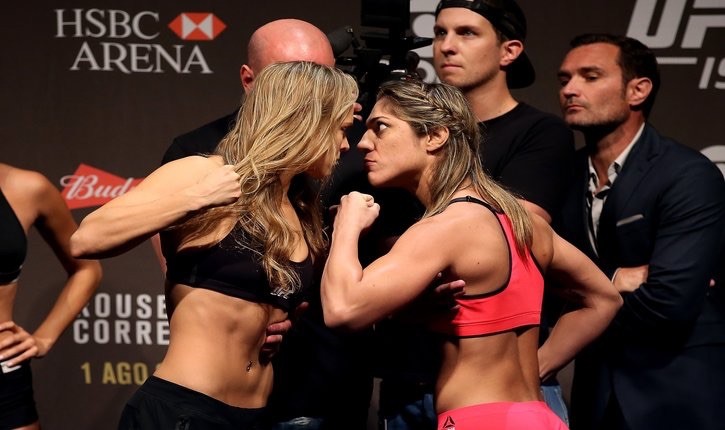 UFC 190: When the Smoke has Finally cleared….

UFC 190 headed to Brazil, and had a card stacked from top to bottom. The nights main event saw Ronda Rousey absolutely obliterate opponent Bethe Correia in just 34 seconds. Correia, a knockout specialist, was left stone cold and flat faced after a blistering flurry from Rousey.

The round started with both ladies exchanging on the feet. The challenger went down briefly but rather than charge in, Rousey let her stand back up.. A crushing knee to the body, followed by a right behind the ear and left jab to finish.

It was all it took for the champion to defend her belt in under a minute, for the third time consecutively. Joe Rogan couldn’t of said it any better with his praise of the best female fighter in history. He described watching Ronda’s rise and performances as an “honour”, and to be honest I couldn’t agree more.

Correia must once again start to climb the ladder. After being finished in such a fashion however, the ladder may be a long one. For the champion, a third encounter with rival Meisha Tate is already confirmed.

If you read my article Shogun vs Lil Nog 2- A battle for the ages, then you will forgive me for saying I told you so. These two men had the fight of the year back in 2005, and they each received Fight of the night honours in their quite brilliant second encounter. The first round was a scary one for Rua fans as he barely survived several big shots from Nogueira.

He opened up more in the second, landing big body kicks to the fellow Brazilian, as the two exchanged heavily all round. In the third, both men showed tremendous heart as they battered each other more. Rua nearly caught nog in a choke at the end of the round, and this proved enough for him to take rounds two and three. Rua was victorious once again winning 29-28 on all three cards. 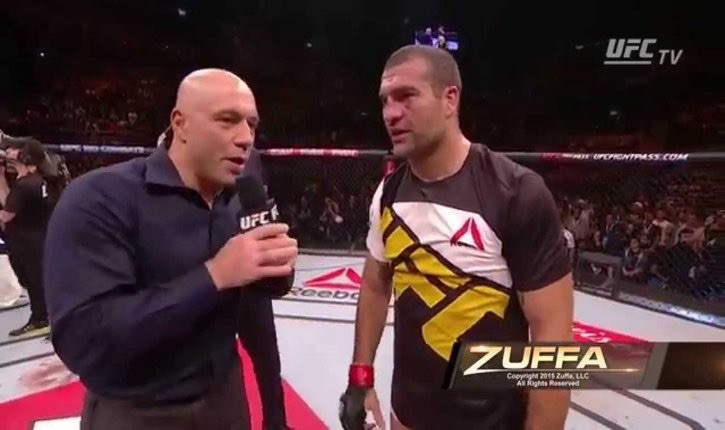 It’s hard to say who’s next for these two men with a division so busy. Waiting to see what happens between Texiera vs St Preux, and Anthony Johnson vs Jimi Minuwa could add a little clarity

For the larger of the Nogueira brothers UFC 190 had the same disappointment, but with much more sobering consequences. Stefan Struve and Big Nog went at it for three rounds.

Neither man looked fantastic, although it was the “Skyscraper” that looked the better of the two. The fighters exchanged often sloppy shots throughout.

Nogueira got Struve down briefly in the second and looked for a choke but to no avail. In the third it was the Dutchman who turned up the heat and won a unanimous 30-27 decision.

Dana White has confirmed that Big Nog will likely retire after this fight, but has hinted he will keep the Certain Hall of Famer around, a la Chuck Liddell and Matt Hughes. For Struve he showed interest in a fight with BigFoot at the press conference. He also stated however that he has some injuries that will keep him sidelined for a while.

Speaking of Antonio “Bigfoot” Silva , he fought Soa Palelei in a heavyweight clash. The first round was fairly tentative, and actually saw Palelei attempt some surprising takedowns. The second round came and so did a massive barrage from Bigfoot. An uppercut followed by a knee dropped the Australian fighter, and silva pounded away until the stoppage came at 0.41 seconds of the second round.

A much needed win for Silva, he has expressed an interest in fighting on the Japan card later in the year. As for Soa Palelei, possible demotion to the undercard looms.

Number 1 ranked Claudia Gadelha battered opponent Jessica Aguilar, dominating the fight from the first round onwards. After Looking like she had broken the nose of Aguilar, Gadelha picked apart her opponent, and picked up a unanimous nod from the judges. Recently loosing a razor thin decision to current title holder Joanna Jedrzejczyk.

Gadelha called out the champion in both her native tongue and English after her victory. Her wish it seems has been granted by UFC boss Dana White. He has confirmed next for Gadelha is a shot at the gold. As for Aguilar, some recovery and back to the drawing board.

Maia vs Magny Put on A show

Number 6 ranked and 37 year old Damian Maia put on what was an absolute world class Jiu Jitsu clinic, dismantling Neil Magny and his winning streak. Magny didn’t stand a chance as Maia smothered him from the very get go, nearly securing an arm bar as the round closed out.

In the second he once again dominated Magny on the ground before making him tap. It was a cold lesson for Magny, showing him the real difference between mid range and top ranked fighters. For Maia it was a night of celebration, not only for him and his team, but for his nation and its own martial art.

We saw UFC 190 crown two new Ultimate Fighters. Bantamweight winner Reginaldo Viera won a wild fight against a game Dileno Lopez. The two exchanged chokes in the first, but it was Viera who got the judges approval and the title of Ultimate Fighter.The new Lightweight Tuf winner Glaico Franca submitted an exhausted Fernando Bruno after a slow, mainly grappling fight with just 14 seconds left in the third round.

Patrick cummins ensured he won’t be making any more coffee anytime soon with a tko victory over Rafael Cavalcante. Iuri Alcantra picked up a win, and Clint Hester was stopped by Vitor Miranda.

UFC 190 was a fantastic night of fights all in, and one that has left many stories to unfold in its wake. We may have to say goodbye to one of the greatest in Big Nog. We may have seen the last notable Pride re match we ever see.

We may have seen a new potential title holder in Claudia Gadelha. But what a we certainly did see was what Joe rogan described as the lights went down. He likened witnessing Rousey to witnessing some of the all time greats.

He said that witnessing her fight was not just watching a fighter, but watching a piece of history that you could share with both children and grandchildren. We may have seen the most complete and scary Ronda Rousey to date. But the really scary prospect is that she has still plenty of time to get even better.

I’m not sure if I will talk about Rousey to my grandchildren or not. But the way she gets the whole fighting and non fighting world talking about her…….well, Joe Rogan may just be right.