UFC 189, Nobody does it better

Now that we (yours truly) have come down from the self-inflicted high. Felt it was time to give some thoughts on Saturday nights UFC 189 in Las Vegas.

Wow… That’s it, nothing more can be said. Just wow!

Things could not have gone any better for the UFC’s much-hyped flagship event. After the almost endless roller coaster that was the build-up. With our collective stomachs wrenching at the thought of any further potential upsets or changes. The ride came to its final destination Saturday night at the MGM Grand Garden Arena.

With a packed iconic venue and not a ticket to be had for love nor money. A sea of fans, many of whom had travelled from far off lands. Awaited the arrival of their fighters in a loud and boisterous mood.

And from start to finish the main card delivered, over-delivered in fact and some. With each and every single one of the fights setting the bar as the momentum continued to build and build toward the main events.

The night’s action kicked off with a bang or should I say a knee from the undefeated Thomas Almeida, stopping the veteran Brad Pickett in devastating fashion. With the finish setting a fitting precursor to the evening’s entertainment.

Next up Gunnar Nelson took on Brandon Thatch. Thatch with something to prove coming off of a loss and just looking so much physically bigger than the Icelander.

It may have looked like Nelson was in for a tough night. But with two back to back training camps under his belt and that World-class grappling, Gunni had some other plans in store. Smothering Thatch in a Boa constrictor like submission in the first to quickly finishing the fight.

What about Jeremy Stephens, that guy always brings a ferocity when he competes. And in one short sharp movement with his brutal knee finish in the third round over Dennis Bermudez, it personified just that. It’s was lights out for Bermudez and lights on for the co-main event of the evening.

Robbie Lawler and Rory MacDonald are two guys just so evenly matched. With their previous fight having gone to a hairs breath split decision. It was anyone’s guess how the welterweight title fight was going to play out. But, did it ever live up to its billing! 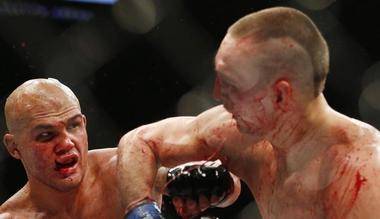 The two very best in the world in that weight class went toe to toe in a back and forth fight for the ages. At some point in the first, MacDonald broke his nose and then subsequently his foot. But you wouldn’t have known as the two continued to trade leather and flesh in an all-out war.

The fourth round ended with both fighters standing in the centre of the octagon transfixed on each other. Appearing to those watching around the world as though they were running on nothing but pure basic animalistic instinct.

Going into the fifth and final round, everything was to play for. The fight might have already been stopped at this point as MacDonald looked like someone who had been in a bad car crash. Fights have been stopped for a lot less.

With the champion not too far behind in the damage department. Lawler turned it up and finished a battered and blood-soaked MacDonald, who’s body simply capitulated to the accumulation of damage. In what was, without doubt, one of the most brutal battles in the promotion’s history. What heart from both fighters in a fight that had everything.

McGregor Faces Mendes for the Title

The cards main event was the reason many thousands of Irish fans had travelled from far and wide. As Conor McGregor faced Chad Mendes for the interim featherweight belt. With Jose Aldo now but a distant memory, the masses which filled the MGM were solely invested in the new headliner. With just a few short weeks to hype the matchup. Preexisting animosity, mixed with some of the now-familiar McGregor rhetoric. Chad Mendes had become enemy number one.

Enter stage left the Notorious one to a wall of sound from the throngs of fans and a live Sinead O’Connor soundtrack. It might be pointed out that up to this point a live musical performance at any previous UFC events was unheard of! But 189 was special, we knew that from the beginning and it was down to the McGregor effect.

Not to be outdone, enter stage right Mendes with his very own live walkout track. The stage was now set, that question was ready to be answered and Mendes quickly set about proving his point. With some back and forth exchanges on the feet. McGregor landed some heavy body shots which looked to take the wind of Money’s sails.

But not to be outdone, Mendes managed to take McGregor out of his game and to the ground. Felt strange seeing McGregor on his back, unfamiliar territory. But the wrestler question was being answered right before our eyes.

Landing some solid elbows a nasty cut appeared over McGregor’s right eye. Getting back to his feet he continued to land heavy body kicks and punches, while at the same time absorbing some big shots on the chin.

Round two and things continued where they left off as Mendes got another takedown and laid on top landing some big elbows. McGregor stayed active, working from the bottom with some of his own.

As the clock ticked down with McGregor on his back for the majority of the round, it was all Mendes. Then whether through frustration or fatigue, Mendes went for a guillotine and lost his mount as the two popped back to their feet.

It looked like Chad had blown whatever reserves he had as McGregor moved in for the finish. With a barrage of unanswered shots, he dropped Mendes with a straight left to become the UFC’s Interim featherweight champion.

Speechless, even Joe Rogan sitting cageside could only muster the words, “wow…wow.. wow.. wow…wow.. wow.. unbelievable.” History had been made, questions had been asked and answered and Conor McGregor was now the first UFC champion in Irish history. That’s all she wrote folks!