Neil Seery finds himself in action this weekend at UFC 189. It’s his first time back inside the cage since beating the formerly unbeaten Chris Beal in a unanimous decision last January. But the Team Ryano flyweight isn’t hanging around and dwelling on past successes. His singular focus right now is the man in front of him, Louis Smolka, as he looks to continue his momentum as he climbs the division’s roster. We checked in to find out how he has been doing since Sweden, strange internet photos and his palatial pad in Las Vegas.

I have to ask you about a picture on social media of you fishing down in cork wearing a snorkel and mask, what was the story there. Did you expect to get pulled in by Moby Dick or something?

I know we were just acting the bollix before we went fishing down in Cork, we always have a bit of crackdown there. But I had a snorkel and mask in my car from when I go swimming. So I put it on and grabbed my fishing rod just for the crack. I’m always acting the bollix, we’ll always find something to do.

How was the whole Swedish experience?

Yeah, it was brilliant, walking away beating an undefeated fighter Chris Beal. A lot of people expected a lot from him at flyweight and I put a halt to that… He was a big favourite going into the fight. He was a big lump of a fella.

He felt very strong in the clinch. He’s originally from a wrestling background, but you could feel his power in the clinch. Even trying to hold him, he was such a big lad, it was a struggle. He said before the fight he’d like to test his boxing against mine and that came to an end quickly. He went for the first takedown.

Do you have any worries as regards the air temperatures etc in Vegas? Obviously Macgregor has gone out there two months before the fight.

I think he has gone over because he has plenty of dough and he doesn’t want to be annoyed over here, you know. I’m sure he didn’t want everybody wrecking his head over here, so I’m sure that was one of the things.

Obviously he’s getting used to the air, whatever, it’s a lot hotter and a lot thinner. There’s feck all I can do about the bleedin air, I’m just there to fight man.

It’s going to be a massive card, one of the biggest cards in the history of the promotion. What are your own thoughts on the event?

Yeah I’m looking at the card and I’m going, I don’t really care about anyone else on it. I’m not being a dick or anything, it’s just that I have a fight in front of me. I have a good opponent a dangerous opponent in front of me. Look if I get the job done, then I can enjoy the card. I can sit back like everybody else. I’m on second, then I can enjoy the card and take it all in.

But as for going over and thinking about cards… It’s great to be on a card as big as that, you know what I mean, it really is. But I’m just focused on one thing, that’s Louis Smolka. I’m not focused on anyone else’s fights. I really do hope that Conor comes away with a win and Gunni and all.

There are quite a few of the guys from the UFC Dublin card when you think about it.

Yeah, you’re looking at the amount of Irish going over, something like 25%, it’s going to be like Dublin. It will feel like the Dublin show again, but as I say, I’d only care for anyone else’s fights. Good to see everybody do well, but I’m just concentrating from what I want to do.

And Louis Smolka what can you tell me about him?

Will you be training in that TUF gym when you’re in Vegas?

As McGregor has Mac mansion, the top of a name for your gas when you’re in Vegas… 2 Tap Towers!

Team Ryano head coach Andy Ryan had this to say 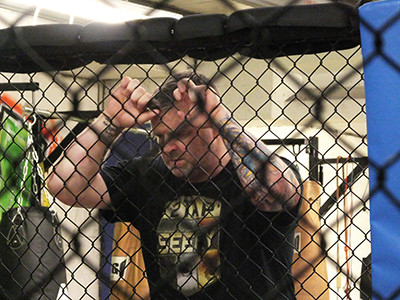 Yeah, he’s a tough kid. When I watched that fight in Australia I think he was getting beaten. He was dangerous with those kicks and stuff. You know, he’s young as well, ambitious so it’s going to be a dangerous fight you know.

I think anyone at that level in and flyweight in the UFC it’s a tough fight, there is no easy fights. It was the same in the Beal fight last time you know.

I see it is a tough fight. I see Neil pushing the pace for three rounds you know. I don’t predict rounds or submissions, anything like that you know, I just want to get the win and that’s it whatever way it comes.

And I just think Neils fitness is good, he’s good boxing, good Jiu-Jitsu, people forget that. Look at his record on Sherdog and half his wins are by submission. So it doesn’t matter where it goes, I just want Neil pushing that high pace the whole fight you know.