UFC 189: A Light Diary of a First-Timer’s Visit to Las Vegas

On to the main event. Unfortunately, I was not able to enjoy the night as well as I would have wished – I had a dose of hypertension. A few factors contributed to this. I don’t drink coffee, but I had a frappe earlier on, and the caffeine in it was wreaking havoc with my system. I should have known this, but oh well.

Secondly, I was contacted by a friend who had just arrived in Las Vegas on a whim and was looking for a ticket. I was at first dismissive. But then something odd happened. My wife and I went to 1842 for a drink but found it crowded and seatless, and so went to the Sports Bar instead.

Which is over the other side of the MGM’s massive sprawl (and is about 20% cheaper too). We sat down on barstools, quite coincidentally beside two Corkonian ex-pats, who were living in Canada. We just discussed the fight, while I was texting my friend back and forth. I apologised for my rudeness and explained.

One of the lads turned to me and said that one of his own mates had been gifted a ticket and didn’t want it. I went up to their room and bought the ticket for my friend, who then chose to arrive late. Lucky for her; unlucky for me! I was furious with her and stressed out over missing the beginning of the event.

Then the first fight came and went, and she arrived. I rushed into the arena having just missed Neil Seery’s walkout. (I’m no ogre: when I’m mad with people, they usually get an apology soon after, which she did). Lastly, the only beer available was Bud Light (or flavours of it), and it’s a damned awful drink. It didn’t sit right in my belly at all.

I have to disappoint here and say that the fights were something of a blur, and I can’t review them as the event did not record on my Sky box, much to my disgust. I was disappointed for Neil and Cathal, but the decisions were right (except that Cathal’s fight should not have been a split decision).

I’m still wondering if Cathal is actually going to go ahead and work on boxing. I think Cathal’s great – I’ve seen him fight live 5 or 6 times now, even going to Stockholm to catch about there. He sure needs to do something with his stand-up, but I hope he’s not overreacting.

What about that victory for Gunni versus Brandon Thatch? Absolutely phenomenal. The stadium erupted when he got that choke in. Good on him. I suspect he will headline UFC Dublin on October 24th. I think Conor will be there too, but as a coach, not a fighter, if you follow me 😉

The co-main event was one of the most amazing and bloody affairs I’ve seen live or on TV. It was heroic how the two fought through the first four rounds with that much damage. An absolute rollercoaster, it could have gone either way and dammit they nearly needed sawdust to purify the octagon afterwards. Unbelievable match. Well done to Robbie for riding out the storm and finally delivering that crunching blow which caused Rory’s face to decide that he’d taken enough. 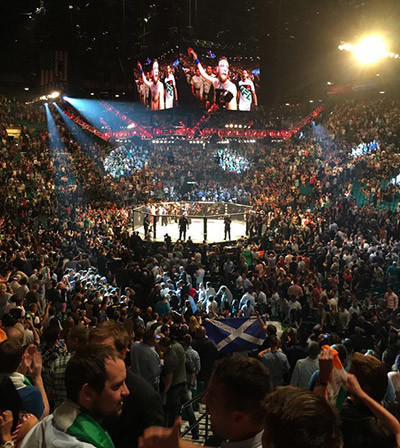 What can I say about the main event? I began to get butterflies in my stomach about halfway through the co-main. Add that to the fact that I already wasn’t feeling the best, and I was a wide-eyed, sweaty idiot. Sinead’s performance was great, as was Aaron Lewis’ – although something happened during it (see the list of Don’ts below).

Terrified. That pretty much sums up me and my wife during the fight! I know Tony McGregor said his family were in pieces when Conor was bloodied, and while it didn’t go that far, there were times we were fearful of the outcome.

The first time I saw Conor fight live was for the Cage Warriors featherweight belt. In that and every other fight since he had been in total control, so understandably I was panicky. I think I roared out “NO!” when Chad looked like he had that guillotine in for a split second, but then that last 50 seconds of magic happened and Conor fed him to the lions.

Pure magic. I’m not afraid to say that I shed a tear or two when I saw Conor go to his knees, his emotions getting the better of him. Chad coming over to clasp hands with a kneeling, tearful Conor is one of the great moments in MMA for me.

Once again there was much mirth and noise, along with some funny moments (“Shoes off for the boys in green!”). Something funny happened on the way back, giving what was at first a great memory, but is now a little bitter-sweet.

While struggling my way back through the MGM floor I saw ‘Stitch’ Duran who was posing for lots of photos. In passing by I said to him that he was a busy man tonight, and he chuckled and agreed and I went on my way. I wended my way until a minute later I was halted by a glut of several hundred Irish fans blocking the main casino floor.

I began to struggle past them along the wall when I felt a hand on my shoulder. It was Stitch again! He said (paraphrasing) “You’re my guy; you’ve gotta help me through this!”. It was mental but fun! I led him through the casino, people shouting at Stitch, regular casino-goers taking photos of the Irish fans, all of them shaking their heads in wonderment. Once we got through I just talked a little more garbage and Stitch went on his way. It was a special moment. What a shame things have gone south for him.

I still wasn’t feeling great, and so am embarrassed to say I went to my room to chill. On my floor, I passed by Michael Graves who was due to fight in the TUF 21 finals, gave him a yelled ‘ATT’, which was shyly acknowledged, and then went to bed.

Did some touristy stuff and shopping the next day, the highlight of it being the Miracle Mile Mall, the entrances of which you can find near the Planet Hollywood casino. You can find the Las Vegas Fight Shop in there – a great place to pick up apparel and gear. There’s also a good few places to eat. Half of it is done up like a Moroccan bazaar, and looks fantastic!

After returning and freshening-up, we went to the TUF 21 finals. I was a great deal more relaxed at this event! We got slightly better seats. 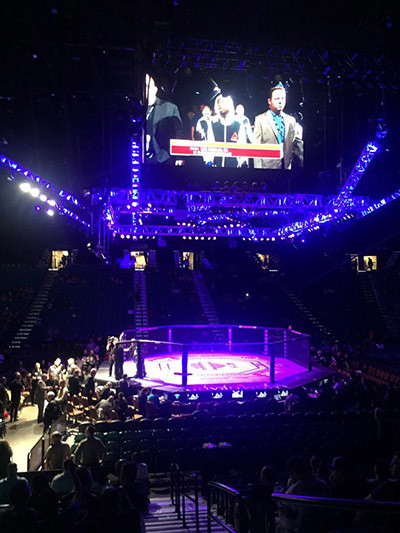 The crowd were quieter but were in good spirits. One of the first fights saw George Sullivan vs. Mike De La Torre. There was a lady there, an absolute credit to MMA fandom in my opinion, who kept screaming for George… “COME ON, GEORGE!” every few seconds. She was applauded as loudly as Sullivan at the end of the bout! At one stage a guy joined in with a “DO IT FOR *HER*, GEORGE!”, which cracked the audience up.

A lot of the 115 ladies (including the champ) turned up to watch Michelle Waterson make her workmanlike debut. Chris Weidman was there too, signing for folks.

All was going well for ATT until the actual final, where Hassan was tapped out by the Blackzilians’ Usman to the (rather harsh) cries of “Go home ATT!”.
What about Wonderboy Thompson? Incredible KO! That was fun to watch!

When all was over, we skipped out (way more easily than the previous night), and toured the Strip at night. Arriving back to our floor, we passed by Michael Graves and Nathan Coy (who actually sat a couple of rows in front of us during the finals) talking. I didn’t know what to say. Great that their guys won, but that the eventually lost the 300k.

The next day we checked out and flew to San Francisco for a further five nights. I won’t bore you with the details of those here! As I said at the beginning of the article, here are some dos and don’ts if you’ve for coming to an event in Vegas! 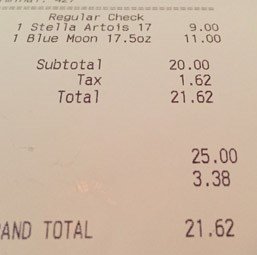 – Wear sunscreen. Christ, it was hot over there, even though it was down a few degrees for that particular week. Don’t forget your lips… I did, and they were in rag order by the time I was flying to SF.

– Perhaps stay somewhere other than the MGM Grand. Don’t get me wrong: it’s a nice hotel and the staff are very friendly, but the prices of rooms, food and drink there during a fight weekend are crazy. Here’s a receipt from 1842 for two drinks:

And there was a two-buck tip on top of that. Nuts!

– Check out the Las Vegas Fight Store for event apparel; it’s less expensive than you might think
– Take the ‘copter flight around the canyon, or if you’re on a budget do the bus tour

– Drink outside casinos generally. The prices are much lower. I went to Chili’s, and yes I know it’s a franchise, but the beer was less expensive and dammit their ribs are awesome! I’ve heard that drinking off-strip and Fremont is cheaper again… and probably more… interesting 😉

– Venture out at night (well, duh!). I actually felt less hassled on the Strip at night than I did during the day, as there were way fewer event salesmen (God those guys annoy me!)

– Remember to eat. Lots of nice places for food on the Strip. No point in turning up to the event shitfaced or sick, only to be turned away at the door.
– Shout for the Irish and Irish trained fighters… or even someone who has slightly ginger hair, or is paler than his opponent!

– Turn up late to weigh-ins!
– Hassle non-event goers. Honestly, security didn’t quite know what to do with some Irish fans. Some regular casino-goers were put out quite a bit, and that’s not what we’re about as Irish fans.

– An important one this: if you must throw drink to celebrate a victory (and yeah sometimes it looks great and is fun), do *not* fecking throw the bottle/glass, you dickheads. My wife was hit in the shoulder with a can, and the guy in front of me with a hard plastic yard-glass.

Think, for Christ’s sake. I saw a can fly past Aaron Lewis while he was singing. Can you imagine what would have happened had he been struck? It’s just the dumbest, most selfish and insensible thing.

– Can we please cut down on the IRA chants in our singing? Their time is done, thanks, and they’re not welcome back.
– Wear your fanciest clothes to the event (see drink-throwing above)!
– Don’t think that LVPD shares your sense of humour. While we were over there one of them was shot dead. You don’t know what kind of day they’re having, and they don’t feck about.

Sorry to end it on a buzz-kill, but as Irish fans, we should be up for the craic, but not in a mean-spirited way – this is why we’ve heretofore had a great reputation.