UFC 189: A Light Diary of a first-timer’s visit to Las Vegas

When my wife and I first heard about UFC189, we rushed into planning the holiday. Not a bad idea, as we had a fair clue that if you don’t get in early you’ll get burned. We both had never been to Las Vegas before, and in hindsight, we would do things a little differently.

This article is essentially a little diary of what we got up to in Las Vegas, some dos and don’ts and a little sidebar about Stitch, whom I met in the MGM Grand after the McGregor fight. A couple of notes:

I never ask anyone if I can take their picture, but I respect peoples’ privacy. As a result, I don’t have photos of any meets or sightings – sorry!

– I am of a certain age, and so the holiday was not a booze-fuelled vomit-fest.
– This won’t be an in-depth review of the fights.

We got up at sparrow-fart on Thursday morning to take the initial flight into Chicago. We had attempted to reprice taking Wednesday off too, as United Airlines (with whom we flew throughout) bumped our flight to Las Vegas from Chicago, so we knew we were in for a 7 hour wait rather than the original 2 hours. It would have cost us nearly €1,400 to move flights, so we gritted our teeth and bore it. Our first hurdle was the US Immigration point in Dublin Airport.

They were understaffed, and it took over 90 minutes to get through. The new self-service machines are a bit fiddly (they didn’t work properly for us), and even if you do get them working properly you still have to wait in a different queue to be processed by a human. In fairness to them, they were bringing people forward whose flights were imminent, but as we were better timekeepers this just made the wait even longer for us, so I can’t advise you to get there early!

United have a reasonable in-flight service with above-average food, but only a modest choice of in-flight movies and music. Still, I was kept entertained throughout the flight. I even managed to nod off for a few minutes, which is rare for me on aeroplanes; I’m quite a light sleeper. We arrived without incident in O’Hare and explored a little.

Not much in there, unless you want to eat your way through 7 hours. We tried to get put on standby for an earlier flight, as I really wanted to get to the Invicta show to cheer on Catherine Costigan, but we had missed an earlier one by 30 minutes or so. Bummer. We couldn’t find a pay-lounge where we could rest easy either, so resorted to hanging around the gate.

The flight to Vegas was awful. Some guy was thrown off the plane for hassling an admittedly annoying woman before we took off. The dude threatened to “slit her throat” if he found her on the Strip. Fun times. The flight itself was bumpy throughout, and there was zero in-flight entertainment, and no food – just beverages.

The Eagle Has Landed

We landed, and I was shattered tired, having not properly slept for nearly 24 hours. However, as we were in Vegas I pepped up a little, but only enough to get me to the hotel and checked in! God, it’s warm there. We arrived at the MGM Grand, and I took my first snap.

Yup, not an expertly taken pic – I was wrecked! It was about 23:30, Vegas time, and we were due to get up the next morning at 04:30 for a helicopter flight around the Grand Canyon. Glenn Robinson of the Blackzilians was waiting in line ahead of us, along with a couple of his fighters. This alone got me in the UFC mood. We were also attending the TUF 21 finals on Sunday evening.

We checked in, got our keycards (complete, somewhat unfortunately, with a McGregor/Aldo motif) and second time of asking, found the correct lift to take us up to the 20th floor. We shared that lift all the way to the top with Dan Lambert of ATT (whom we saw several times in places where we drank in the Grand throughout the weekend). When we got out, there were a couple of the ATT TUF 21 guys waiting at the ice machine! Is this the way fight weekend is in the MGM Grand?! Stars-amundo!

We took the flight dead early in the morning. I can’t recommend this highly enough, although it’s expensive. Also, if you’re on the wrong side of the ‘copter, you might miss out on some views. I’m convinced ‘copter pilots are all a little mad. We had a good laugh with him and took a few snaps. See a collage below. Very artsy.

Taking in The Rio Grande 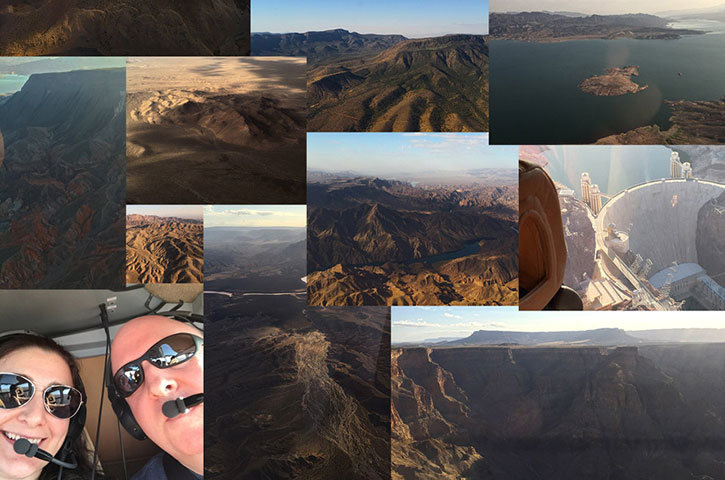 After the trip on the way back to our room, we breezed past Conor McGregor’s parents in the MGM Grand, but I noticed only just as we were passing.

Anyways, on to the weigh-ins. We arrived with 30 minutes to spare, after buying a t-shirt for a friend and got ok seats. We had previously bought a couple of rounds of ridiculously expensive beers in 1842 just outside the main corridor to the arena.

I bought a couple more in the arena and knocked those back too. I had to break the seal, so I got up and noted that the queues to get beer were terrible. In the jacks, I overheard that people were waiting 45-60 mins for a beer. Screw that, I thought and ran out to 1842 for a round. Expensive or not, it was still better than that kind of a wait.

Unfortunately, what I did not know was that the Fire Marshall had just finished conducting his safety review. I was in the bar maybe only 4 minutes, and when I came back out they had cordoned off the area and were not letting anyone back in. Remember that scene in Wayne’s World 2, where an anxious Christopher Walken wanted to get backstage because his “girlfriend was in there”?

I was that guy for 10 minutes! Slightly mortified looking back on it. I gave my wife a call and she came out and had to liaise with several people before I was let back in. Phew! When I got back, I saw that there were a few hundred seats still available, especially near the commentary gantry, so my heart went out to the dozens who were simply not let in. Here are a few pics from the event.

Look how smilie Chad is! Awww!

It was reported that anywhere from 10,000 – 11,500 came out just to watch a bunch of guys step on some scales. Afterwards, security and the LVPD had to disperse the noisier Irish supporters. It’s not like they were being destructive, but we were damn loud! I guess they’re not used to this level of fandom. Certainly, the hotel staff had said they’d never seen anything like it before.