UFC 178 is in the bag and what a night of action it was. From KO’s to controversy, this card had it all and it didn’t take long for the cards hotly anticipated fights to make an impression!

Although on the prelims, Dominick Cruz against Takeya Mizugaki had all the right ingredients for a great fight. After what seems like an eternity, Cruz the former bantamweight champion finally made his triumphant return to action with a dazzling display of striking and aggression. Showing just a glimpse of the movement and angles which has defined his career to date.

Cruz simply overwhelmed his opponent a minute into the very first round of action. A takedown followed by a series of unanswered right hands had the Japanese fighter out on his knees. Setting the Dominator up for an immediate title shot against the champ TJ Dillashaw. Not a bad nights work for a guy who’s best days could have very well have been behind him.

Cat Zingano is another fighter who has spent a lot of time out of action. Although out of the public gaze, Zingano has never quite been off the radar. And with all the trademarks of this typically ferocious competitor. Zingano stopped the game, Amanda Nunes, just over a minute into the third round via a flurry of elbows and punches. And in the process, set herself up for a title shot against the reigning, so far unbeaten bantamweight queen Ronda Rousey.

Yoel Romero won against Tim Kennedy in what can only be described as a very controversial set of circumstances. From the get-go, Romero looked strong and landed a number of significant strikes which managed to back Kennedy up in the early rounds.

Stoolgate, As Romero, Doesn’t Get Off His Stool

Never looking like he was out of the fight, Kennedy hit Romero with a series of uppercuts which had the Cuban out on his feet as the bell rang for the end of the second round. Enter controversy stage right. As the bell sounded for the third round, Romero remained sitting on his stool. Appearing wide-eyed and somewhat disorientated It looked as though Romero he was unable to continue.

In the melee between the commissioners frantically trying to get him up and the stool out. He managed to get an additional 28 seconds of rest, which could have very well saved him. Kennedy was furious and complained but the fight continued once the cage had finally been cleared. Not too long after Romero landed a series of punches which knocked Kennedy to the canvas and out of the fight.

At the post-fight press conference, UFC President Dana White commented that it was in fact the UFC cut man, who had placed excessive Vaseline of the face of Romero. Who was in fact responsible for the delay in restarting the fight. It’s still unclear as to whether Kennedy’s complaints will be upheld, but for now, the result stands. 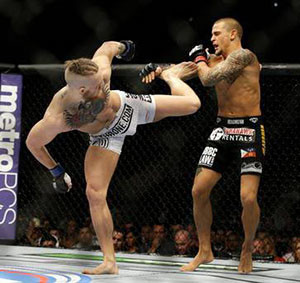 On paper, the third last fight of the night saw Conor McGregor taking on Dustin Poirier in what was for many the biggest fight on the card. The pre-fight talk had the Dubliner claiming he would put Poirier away in the first round via KO/TKO and now was the time to prove it.

And prove it he did. With some early exchanges, Poirier did manage to land some kicks and punches. But was soon backing up as McGregor walked down the ATT fighter.

McGregor then landed a left wobbling his opponent and seconds later another left clipped Poirier behind the ear, sending him to the canvas for McGregor to finish. On October 26hth the featherweight King Jose Aldo meets Chad Mendes to determine if the belt will be staying in Brazil or going Stateside. Conor McGregor is going to be in the audience with his own set of plans of bringing the belt to Ireland. How many are betting against the SBG man now?

Eddie Alvarez finally made his long-overdue appearance in the UFC. Something which he had tried yet failed to do for some time. The only problem was that he came up against an inform and always game Donald Cerrone. In typical Cerrone style, he managed to take everything Alvarez could give him in round one of their bout. As the fight moved into round two, someone or something, probably Alvarez multiple unanswered punches, woke cowboy up and he finally clicked into gear. 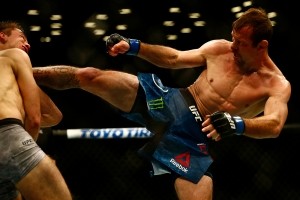 Using his Muay Thai to perfection Cerrone softened up his opponent throughout the second and into the third rounds. With Cerrone pouring on some punishing leg kicks, Alvarez faded. And when Alvarez fell to the canvas in the third, it looked like the stoppage was there. But Cerrone decided to follow him down and rode out the remainder of the round cowboy style and in the process winning a unanimous points victory.

The final fight of the night saw Demetrious Johnson taking on Chris Cariaso. In yet another dominant performance by the flyweight champ. Might mouse never looking like he was in any kind of real trouble. He took it to Cariaso, finishing him by Kimura halfway through the second round. It’s hard to see many current big threats to the flyweight king s reign outside of John Dodson.

Following on from the win, Johnson who is one of the sports most active champions said that he intends to take a little extra time off. But should be returning to action in early 2015. Perhaps the landscape may have changed somewhat during that time. Just like the champ himself who is always evolving.