What a weekend of fights we have at UFC 178. Stacked before us like a pile of tasty syrup laden pancakes and just waiting to be devoured by the ravenous MMA massive. With so many outstanding fights taking place, it’s really the card that has something for everyone.

As a matter of interest, I wonder how many people actually remember how this card was first billed. Now in what seems like almost a lifetime ago, it was originally the highly anticipated Jones vs. Gustafsson II. A fight many had been salivating over for months…and then it was gone. Stolen like a thief in the night by yet another injury, in an injury-prone sport, that time by Gustafsson.

So what next? Up steps DC, Daniel Cormier to quell said masses and turn what had been a highly anticipated fight into a fans wet dream. As Jones and Cormier went head to head and toe to toe, we just couldn’t get enough. The result of which was that the new matchup became an even bigger fight than it’s predecessor. But wait I’m not done. 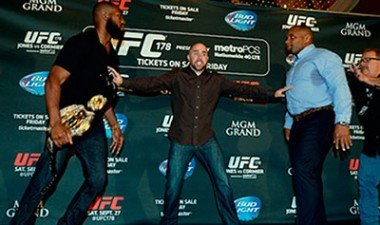 As only a short time later we learned that Jon Jones had received quite a severe cut over his eye during training. Would he still be able to fight? That’s all people wanted to know! Not to worry, just give the eye a little rest and he would have plenty of time to heal pre-UFC 178.

Then like a bolt out of the blue, in what can best be described as an on and off soap opera. Jones succumbs to an injury received while training. Now I ain’t superstitious or even religious for that matter. But something tells me that this Jones fight was just not meant to happen.

Once the MMA world got over its initial shock and a whole new main event was announced. UFC 178 continued to snowball, gathering one tantalizing fight after another. Title contenders, long-awaited returns and the arrival of a new fighter in the lightweight division. All have helped set the stage for what will surely be the most jam-packed card of 2014. So let’s get to it.

A quick look over the prelims..

That’s that! And of course, the return of the former bantamweight champion Dominic Cruz after such a long lay off. It’s hard to fathom what it must have been like for a world-class competitor such as Cruz to be sidelined by forces outside of his control. And with a successful return to action this weekend, it could really put a cat amongst the pigeons in the Bantamweight division.

We could spend more time discussing the undercard, but the main is just too damn tantalizing. And in all honesty, it’s where most fans are really focusing their attention. From top to bottom there are some outstanding bouts with so many intriguing backstories, you could almost write a book.

First off we see Amanda Nunes taking on Cat Zingano. It’s Alpha versus Lioness and you just know in your gut that this will be a great fight. Zingano makes her return to competition after almost a year and a half. And she is looking to put her stamp on a division which lacks a true contender to Rousey’s crown.

She’s not going to have it all her way, as Nunes is the type of fighter who will meet Zingano in the centre of the cage. This has got all the elements for a really great fight.

Tim Kennedy comes into his fight against Yoel Romero believing he can take down and keep down the former Olympic wrestler. It’s something almost nobody else in Romero’s MMA career has been able to achieve to date. But hey, if Kennedy says he can do it.

I’m sure Romero has different plans and with whispers of the thirty-seven year old Cuban being mentioned alongside potential title contention. This fight has the potential to end up on the mat. But with big knockout power being held by the Olympian, he may very well not be the one to take it there.

Donald Cerrone is fighting again. Does it come as a surprise no. Anyone who follows his career, especially over the last year will know that Cowboy is always game for a fight. And in his fight with the UFC’s latest big-name signing, he’s got one. Eddie Alvarez is the former Bellator lightweight champion and is ranked by many as one of the top 3 lightweights in the world.

And a win over Cerrone will catapult him right up there into the top ten. But don’t expect cowboy to lay down and play possum. You can be guaranteed he has his own plans for how this fight will play out and they don’t end well for the former Bellator champ.

I think you have already seen what I did there right..jumping forward on the card, missing something, someone? Well, truth be known, that every fight is the one most fans are looking forward to the world over. Youtube viewing numbers don’t lie people! But before we get to that let’s not forget what on paper is the main event.

As Demetrious ‘Might Mouse’ Johnson takes on Chris ‘Kamikaze’ Cariaso. Johnson has been so dominant up to this point that the odds against a Cariaso win are pretty ugly. But hey! Remember a certain fight not too long ago? An unbeatable Brazilian been taken on by a good, not outstanding fighter.

We all know how that ended. Don’t always trust the odds and with Cariaso’s well-rounded game? If I was a betting man, that could be a nice earner. Perhaps if Cariaso were to follow Jon Anik’s simple gameplan and “kick him in the nuts“. Who knows how things may pan out.

And of course, lest we forget what for many will be the main event of UFC 178. Following on from his emphatic win 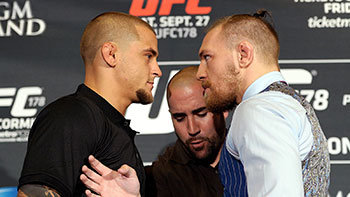 inside the first round at UFC Fight Night Dublin. Conor McGregor finally gets to meet top-five featherweight, Dustin Poirier. With so much having been said in the build-up to this one from both fighters.

Each airing their doubts about the other’s abilities inside the cage. This Saturday night in the MGM Las Vegas Nevada, they finally get the opportunity to shut the other’s mouth and bolster their legitimacy as a top title contender in the division.

The Countdown to UFC 178 viewing figures speaks for themselves. As McGregor vs. Poirier is the fight the majority of fans are most eager to see. There is no doubt that McGregor puts bums on seats and money in pockets and that’s how the UFC machine keeps moving forward.

Is he going to be able to make an early night of it or will Poirier get to derail the hype train? He sure thinks so. Don’t blink! As they say in the US of A. This one’s going to be a doozy.