We recently spoke with amateur mixed martial artist Tommy Martin who fights out of SBG Dublin Ireland. The 23-year-old full-time fighter talked about his aspirations in the sport and what keeps driving him forward on his own personal journey. He spoke candidly about his hopes and fears… as well as his upcoming fight at Clan Wars 22 against Steven Moore DFC Antrim for the lightweight amateur title.

You know how it is, records for amateurs are never right, what is your current record?

My amateur record is 9 – 4. Sherdog is never accurate especially with amateurs, you’re fighting on a lot of shows. It’s really up to the promoter to put those fights on. It doesn’t really matter to me anyway for my amateur record. When I look back I’m going to know my amateur record, but nobody’s going to really care that much.

You look at Floyd Mayweather nobody really cares what his amateur record was. It’s good to look back at the fights, but at the end of the day all that really matters is his pro record.

You’re competing in a golden era for mixed martial arts in Ireland as not too many years ago the current facilities would not have been available.

Definitely we are so lucky, you’re coming into the gym, not only do we have everything under the one roof. It’s MMA classes, not just striking and jujitsu and a bit of wrestling, it’s everything you know. It’s all laid out for you, the platform is there. Just take the same road and no doubt you’ll get there.

Your name keeps popping up quite a lot. Do you like to stay active outside of MMA i.e. BJJ competitions?

Yeah, I do when I can yeah, I love jiu-jitsu. If I wasn’t a full time to MMA fighter I probably dedicate my life to jiu-jitsu. Competition is something I’d definitely like doing, I used to have a bit of a fear for it. I didn’t really perform to my best as I would in the gym in competitions. So now I just embrace it.

Now with the opportunity arises I just jump at it. As they say, face your fear you know, so no I’m just competing whenever I can. Probably not even as much as I would like too, I’d probably like to get even more fights in than I usually do. But yeah absolutely, especially at amateur and while I am young. I want to compete as much as I can.

Speaking of fear, do you fear the fight, to do fear the opponent? What plays a part in the buildup to the fight?

Yet it’s a bit of everything. I used to fear it a lot more, especially than I do now. But it’s a fear of a lot of things, you could look bad in front of people. We all have these insecurities. Fear of getting hurt is the main one, it’s not like I fear a particular opponent, every one of them poses a threat.

But that stuff, that’s in the past, it used to affect me. Not as much as it would now anyway. Every fight that I have I grow more mentally strong. And every fight you see a more better version of me and I feel more comfortable in there. And that is the goal, to get more comfortable in the uncomfortable. It sounds like a bit of a cliché, but I just take it in my stride, I love it.

And what keeps driving you forward. What keeps Tommy Martin up at night? 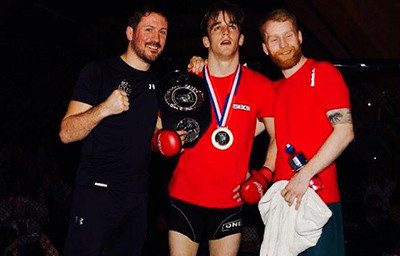 The end goal is always to get to the UFC and win the belt. I’ve no doubt that’s where I’m going to end up and I’m going to do it. I’m going to go all the way, so I’m just enjoying the journey. I just love getting up, eating healthy and going to the gym. Having a laugh with the lads and training hard. Stretching out afterwards, going home and eating healthy again, getting a good 8 hours.

It’s going by so fast. I’ve dedicated the last few years of my life to this. You asked me there my age and I can’t believe I’m 23 already. But I’m going to do this for as long as I can and make the most of it. Really it’s about the whole journey.

What motivates me… money yeah, but it wouldn’t be my main motivation. I’ve been an amateur the past few years and if I was in it just for the money I’d be gone a long time ago because I don’t get paid. No, I just love the whole process of it. And really bettering myself as a person. That I get to do this as a living, that would be great and that’s what I’m going to do.

So your upcoming fight is at Clan Wars 22, your opponent Steven Moore, what can you tell me about him?

I don’t know a whole lot about him. I’ve seen some highlights of him, looks a bit wild. In a technical way, some of the stuff works. Fairly standup, a bit of a karate guy, hands seem to be a little bit low, changes stances. I noticed he had his back to the fence, throwing over hands with his head down looking at the ground.

A few sloppy mistakes like that. But it’s an interesting style, but it’s nothing that’s going to trouble me anyway. I have my game plan, I know what I’m going to do and I have no doubt I will get my hand raised.

What’s your own kind of timeline for turning professional?

I’ve been wanting to turn professional for a while now. Obviously I have to get the green light from my coach john. It’s his decision at the end of the day because I want to fight under SBG. This is the club where I feel they can get the best out of me and help me go all the way. And if I want to fight under SBG, I’m going to do whatever it takes.

Yes, so whenever John says I’m ready. I thought my last fight was going to be my last amateur. I sat down with John and he thought it was best to maybe have one more and then we will see after that. So I’m not going to take anything for granted, I’m just focused on this fight. And hopefully, I’ll go pro after this one, but at the end of the day, it’s up to John. You will definitely see me fight professionally this year, I can guarantee you that.