Todd Duffee & The Power of Adversity

In August of 2009, a 23-year-old Indiana native stood inside the Octagon with the world at his feet. Todd Duffee, fresh off of a 7 second knockout of Canadian contender Tim Hague at UFC 102 in Portland, Oregon. Was the potential new face of a lethargic heavyweight division crying out for new impetus.

Duffee’s confidence and style immediately set him up as one to watch in the Heavyweight division. And in his post-fight interview, he addressed Dana White by saying “That was an appetizer, I want to eat now Dana, let me eat!”. The UFC brass obliged and booked the Hoosier to return in December that year. But a back injury put paid to that and he was replaced for his scheduled bout with veteran Paul Buentello.

It wouldn’t be until May 2010 that we would finally see Duffee back in the Octagon. Where fellow newcomer Mike Russow was his next meal. Russow was also 1-0 in the UFC, and 12-1 in his career, with his only loss coming to k1 knockout artist Sergei Kharitonov at Pride 33. Despite his opponent’s formidable record, Todd Duffee was a heavy favourite.

What transpired will be remembered in the history of both men and the UFC as a whole. As Duffee, after absolutely dominating the fight until halfway through the third round was knocked out cold. In one of the most stunning comeback wins the sport has ever seen.

The Russow knockout blow began to unravel Duffee’s entire existence. As he would find himself shockingly and unexpectedly cut from the UFC roster, and enduring Dana White casting serious doubts upon his character as a fighter. Though the reasons for the release are still not fully known to this day. That has not stopped plenty of people theorising from the information that has been leaked.

What we know for sure is that Duffee publicly complained about the lack of money coming his way from his employer. And Dana White was on record as saying that it seemed to him as though Duffee “didn’t like being in the UFC and didn’t want to be in the UFC”. Nonetheless, without wanting to spend an entire article reflecting on unconfirmed gossip from 5 years ago. Suffice it to say Duffee’s attitude led to him continuing his mixed martial arts career elsewhere. And gave him a lot of time outside the public eye to reflect on his brief spell in the big time. 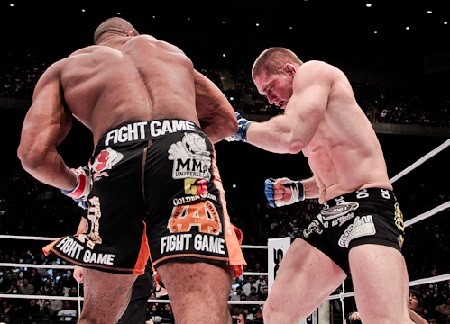 Later that year, however, Duffee found himself fighting in front of the biggest crowd of his life. Stepping in at late notice to be in the first-ever Dream Heavyweight Title Fight at Dynamite!! 2010. Fighting on the traditional Japanese New Years show. Duffee would feature on a card that also starred the likes of Gegard Mousasi, Bibiano Fernandes, Shinya Aoki and Japanese icon Kazushi Sakuraba.

His opponent was then-Strikeforce Heavyweight kingpin Alistair Overeem in the prime of his destructive reign. And the Dutchman put Duffee away in just 19 seconds with a brutal knee and a devastating combination of punches. That knocked the young heavyweight out cold for the second time in two fights. Duffee, who by this point had left American Top Team to join Javier Mendez and Dave Camarillo at AKA, needed to rebuild.

Leaving The UFC Behind

Gone from the UFC, mostly for reasons from outside the Octagon. Duffee began to realise the struggles a fighter runs into when outside of the world’s largest MMA promotion. He told Ed Kapp that being outside of the UFC “ was a nightmare every day. It was sickening. It was very depressing.” He elaborated on his emotional issues, saying; “You want to talk about a bad attitude? I definitely developed a bad attitude during that time period.

For about nine months, a year, I was hard to be around.” Injury-hit. Todd Duffee was struggling financially “There was one point where I would drive to AKA. Check my bank account and I would just walk in the gym with tears in my eyes”. India’s first-ever Mixed Martial Arts promotion, the celebrity-owned Super Fight League would be the next stop. With Duffee signing an exclusive 4 fight deal in February 2012.

He returned to action two months later, stopping Neil Grove in the first minute. Duffee admitted in his post-fight interview that it had been a rough training camp, and was keen to fight again soon. With a 4 month gap until their next show, SFL granted Duffee the permission to fight elsewhere in the interim.

Despite pleas to promoters in both MMA and Professional Boxing, he remained inactive. “I was having a lot of problems. Even the smaller promotions would literally write me off before they had a phone conversation with me. They would say, ‘Oh, he’s got a bad attitude,’ or, ‘Oh, he’s going to want too much money.’” Scheduling issues with SFL led to Duffee once again finding himself a free agent. But then out of nowhere, the word came from Joe Silva. 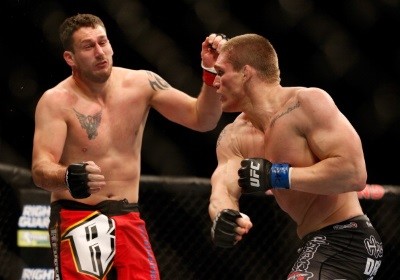 Being Diagnosed With Rare Brain Disease

Just as Duffee was about to try his hand at the world of kickboxing, AKA coach ‘Crazy’ Bob Cook attempted to place a fighter in the UFC. But after Cook’s fighter couldn’t get out of his contract at Bellator, was able to work Duffee back in.

He would return in December 2012 against British fighter Phil De Fries, and on the undercard of the Velasquez. Dos Santos rematch stopped the Lincolnshire native in the first. However just as things were looking up again, Duffee was diagnosed with a mystery illness. “it felt like somebody was stabbing me in the back” after seeing multiple doctors. Duffee was diagnosed with rare brain disorder Parsonage-Turner syndrome and was told he would be out for two years.

6 months later and Duffee was back in full training, having returned to American Top Team. And opened a fitness gym in nearby Boca Raton, Duffee was set to return to the Octagon. In December of 2014, Anthony Hamilton became his third consecutive first-round knockout victim. Scheduled to face Frank Mir in July, the two will headline Duffee’s first-ever top billing in San Diego.

The fight with Mir was made after Duffee asked for it back in March., and his experienced opponent has gone straight into his no-nonsense trash talk. Already speaking of “breaking bones” and calling Duffee a “coward”. The veteran will enter the fight on a high after his upset knockout of Antonio Silva. And with far more experience, will be fancied by many to be too much for his younger opponent. Todd Duffee however, has faced as much adversity as almost any fighter on the roster and will be far from easy pickings for any of his top 10 ranked rivals.