Why oh why… that’s the first thing alot of Mixed Martial Arts fans may have been saying to themselves when the Frankie Edgar vs Urijah Faber fight was first announced… Quickly followed by the words… has it taken so long? Two fighters who will no doubt go down as two of the greats in the history of the sport. Will finally meet for the UFC’s first jaunt into the Philippines at this weekends UFC Manila.

Hard to believe that while these two fighters have a combined 62 professional fights. Have competed in and around the same weight divisions for many years. Yet they have never before met inside the cage.

There are of course a couple of people whom fans need to thank for this long overdue matchup. Namely those of the current Bantamweight Champion TJ Dillashaw and the Featherweight Champion and now p4p King Jose Aldo Junior. Without their dominance at the top of their respective divisions. In all actuality, this bout may never have materialised.

With a fight against Dillashaw not being something, Faber was interested in. While Frankie has already lost to Aldo! Both fighters were keen to stay active while any future fight plans were held in the balance. This is one of the few benefits of log jams at the top of the divisions. As we get the privilege of seeing some of the sports greatest athletes finally going toe to toe.

Headling The Thrilla in Manila

The headliner from the upcoming UFC Manila card is a feast for the fight senses. With both guys so evenly matched, on paper at least Urijah Faber may be the guy with the edge both in experience and in finishing ability. But in reality, this really is a pick-um fight and it will be fascinating to see how it plays out in realtime.

With two fighters whose names are so synonymous with the sport and who have been in and around the elite levels of competition for almost their entire careers. 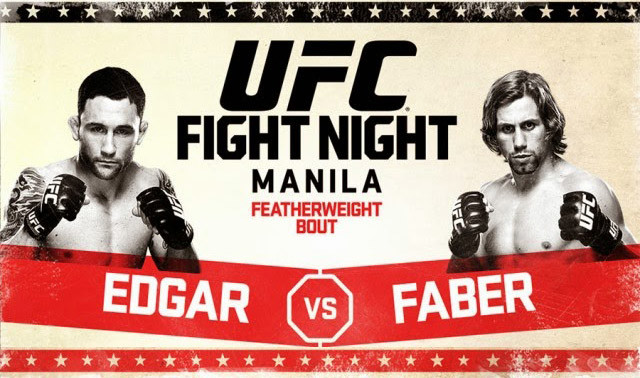 Both guys have represented the sport so well, at such a high level, for so many years. They embody what MMA is, or at least should be all about. Two consummate professionals who always put on unbelievable fights and leave everything inside the cage. So the UFC really couldn’t have asked for two better ambassadors to bring their brand of MMA to the Philipines for the very first time.

Hark back to those hazy days of Ali Frazier and their third and final encounter in what would later become known as the Thrilla in Manila. A name acquired from the constant berating by Ali of his opponent

“it’s going to be a killa and a thrilla and a chilla, when I get that gorilla in Manila.”

The opponents and the political landscape may have changed, yet the opportunity remains the same. The sport of mixed martial arts and of course the UFC will only grow in stature in the Far East, should there be a thrilling encounter between Edgar and Faber this Saturday night. And going by their respective histories inside the cage. How could there not be?