This Saturday night in the FOX Sports fight night main event, ‘The Korean Zombie’ Chan Sung Jung returns after an over three year layoff. Opposite him is Dennis Bermudez, a fighter that’s fought on seven occasions in that period, winning five times. Though this is far from a major event for the UFC, Jung’s place in the main event is an understandable one. Amongst the hardcore fans the anticipation is relatively high for ‘The Korean Zombie’s return and rightly so. Jung built up a blood and guts warrior reputation on the back of multiple memorable moments and fights but whilst his tendency to excite is regularly mentioned, his UFC run was shorter and more successful than is often remembered.

Jung’s time as a fighter under contract with Zuffa began in April 2010 when he entered the WEC with an 11-1 record. His promotional debut would set the tone for everything that has happened since as Jung violently went back and forth with Leonard Garcia in a classic, unforgettable war. The fight rightly won many plaudits but it was Garcia that controversially would be awarded the decision. Nonetheless, though he had lost in his first fight in America, Jung had made many fans for himself. His almost obscenely aggressive fighting style and undeniable toughness collided perfectly with his memorable and soon to be famous moniker of ‘The Korean Zombie’.

However, Jung’s momentum would be halted in his second promotional showing. Taking on George Roop, Jung seemed troubled by the American’s lateral movement and was unable to get any consistent success going. In the end, Jung’s lackadaisical defence cost him as he was knocked out cold by a head kick in the second round.  Unfortunately, Jung’s all offence style of walking forward had been exposed slightly on that night. The fight took place on the penultimate WEC card and would prove to be Jung’s last in the promotion, meaning he officially went 0-2 in the promotion. Either way, Jung had made enough of an impression to be a part of the UFC merger and would make his octagon debut in March 2011. To the fans delight, the fight would be a highly anticipated rematch with Leonard Garcia.

This time Jung was more hesitant than haphazard early but eventually scored a takedown before successfully controlling Garcia until round one’s end. In the second round it seemed that Jung’s slightly more traditional output was helping him as Garcia was left with fewer countering opportunities. Also, the eventual zombie style flurry was only made more effective. An exchange of kicks left Garcia on his back after a slip and Jung took full advantage. From top position Jung would thrive, miraculously finishing the fight with a spectacular submission win via twister, the first in UFC history. The dramatic rematch win was Jung’s first victory as a Zuffa contract fighter and broke his two fight losing streak.

Next Jung would head to Canada to take on Mark Hominick in his home country. Hominick was fresh off of a heroic showing in defeat against dominant champion Jose Aldo but came out overly aggressive and emotional, immediately leaving an opening for his foe. ‘The Korean Zombie’ took it with both hands too, or in this case with just one hard right hand, dropping Hominick only seconds in. Moments later and the fight was stopped as the stunned Canadian failed to defend himself against the oncoming ground and pound. In just seven seconds, Jung had finished a man coming off of 25 minutes with one of the all-time greats and in doing so catapulted himself into the top contender group. 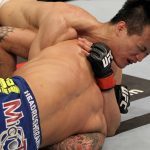 ‘The Korean Zombie’ would solidify that position in his next fight too, fighting Dustin Poirier in a main event classic that would become the almost unanimously accepted 2012 fight of the year. The action was ferocious and high octane as Jung found early success with his grappling. Poirier rebounded in the third round though, using his sharp striking to mostly keep Jung at bay. In the fourth round though, Jung’s trademark flurrying offense would suddenly overwhelm Poirier, staggering him with a combination. Poirier quickly clinched in desperation but Jung immediately synched up a tight D’Arce choke, finishing the incredible fight after over 16 minutes of wonderful action. Once again, Jung had solidified his spot as one of the sport’s most exciting and dynamic fighters.

The win was a great one but Jung couldn’t immediately capitalise on it, instead not fighting again until well over a year later. His eventual return would be a huge one though, when ‘The Korean Zombie’ replaced Anthony Pettis to take on the aforementioned champion Aldo in his home nation of Brazil. Whilst he was tough and game as ever, Jung just seemed a step behind throughout as Aldo was the quicker and more refined fighter in every area. Eventually, the end would come in unfortunate fashion as Jung dislocated his right shoulder. Aldo seized the moment, chasing his injured challenger with offence until the referee mercifully stopped the fight. Fast forward well over three years later and much to the fans dismay, Jung hasn’t stepped into the cage one time since.

Thankfully, this Saturday night ‘The Korean Zombie’ finally rises again. I guess the point of this trip down memory lane was a reminder that whilst much of the conversation surrounding the returning fighter is about his history of thrills, he was and hopefully still is capable of genuinely impressive feats at the elite level. On paper, Bermudez is an incredibly tough fight after such a long layoff but other than in his Aldo defeat, Jung found a way to finish the fight in his other three octagon showings. Aggressive, dynamic and courageous, ‘The Korean Zombie’ fought his way into our hearts as a true blood and guts warrior. Saturday night we find out whether or not he is still the contender he once was.

Images courtesy of fightland.vice.com and mmasucka.com