It’s the middle of the night. Rain is assaulting glass and a parade of lightning danced in the distance. A man sits bolt upright in bed, thick beads of sweat slithering down his forehead. The bald, middle-aged man launches the covers off and sits on the edge of his mattress.

He paws at the bedside table, looking for his phone. He finally gets his sweaty hands on it and drives his finger into the screen, he puts the phone to his ear. ‘Joe, it’s Dana. I’ve had a dream. Get your passport, we’re going to France.’

UFC 220 is almost upon us and it brings with it the most hotly – allow me to repeat myself. HOTLY! – anticipated heavyweight title fight in years, but you don’t need me to tell you that do you? The hype train has been doing laps around the MMA world since Francis Ngannou shovel hooked Alistair Overeem into the phantom zone at UFC 218.

And I don’t mean to sound snarky because I myself am sat in a booth on that hype train with a knife and fork in hand. The incumbent champion versus a surging wrecking machine. The next big thing versus the next best thing. Lovely.

Rhetoric aside, this is genuinely the most fascinating heavyweight fight in what feels like aeons. Stipe Miocic is on the cusp of breaking the fabled heavyweight title curse, as no man has been able to defend it more than twice – those men being Cain Velasquez, Brock Lesnar, Tim Sylvia and Randy Couture.

If Stipe can pull this off then that makes him, at least mathematically speaking, the greatest heavyweight in UFC history. But of course, that is a very big “if.” What stands in his path is perhaps the most terrifying knock out artist in 265 histories Francis Ngannou.

“The Predator” perhaps needs no introduction at this point, but for the sake of continuity, I’ll give him one. His current UFC record stands at six finishes inside two rounds, with four in the first. Five of these are by KO or TKO and one is by submission (kimura). His victims include Curtis Blaydes, Andrei Arlovski and the aforementioned Overeem. Of course, his KOs aren’t normal KOs. They are works of art, and terrifying displays of raw power, unlike anything we’ve ever seen in the division.

Beyond the explosive punches, we also see technical boxing skill and preternatural athletic promise. On top of that, he looks fresh off of God’s gold-plated conveyor belt, standing at 6’5 and built like the tank that all the other tanks are scared of.

Physically he is a much-needed monster in a dilapidated heavyweight division. But what would this really mean without a true Cinderella story? This is where things get interesting. 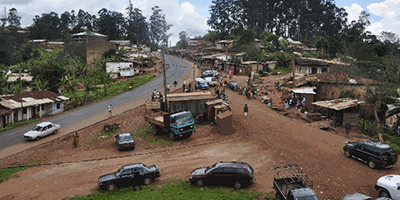 Francis Ngannou was born to poverty in a small village in Cameroon, Africa. Due to his impoverished upbringing and perhaps influenced by his father’s reputation as a street brawler, Ngannou got into a lot of fights.

When he was twelve he began working in a sandpit to bring some money into the family. In his early twenties he took up boxing, and then at the age of twenty-six moved to Paris to escape the hopelessness he saw around him, despite having no money.

He spent a good chunk of time homeless before stumbling into Ferdinand Lopez’s MMA Factory, who saw the malleable prospect before him and decided to take him under his wing. I’m going to say it, but to soften the blow and maintain my own integrity I’m going to put quotes around it; “It’s like something out of a film.”

Just a Normal Guy from Cleveland

Then there’s Stipe. Little old Stipe. He’s just a normal guy from Cleveland with a normal look who is a good wrestler and good boxer. He works really hard and is a good guy with a good record, but he’s prime for the taking, surely? The Cameroonian nightmare is going to dine on this average joe.

He’s too powerful, too big, and too athletic. Plus, he’s using the most scientific training and recovery methods known to man at his new adoptive home in Las Vegas, the Performance Institute. 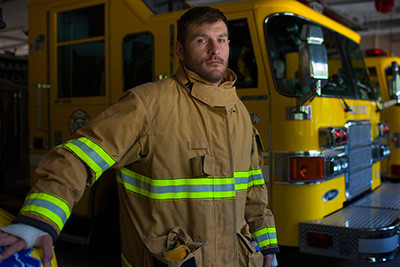 Meanwhile, Stipe is just hanging out in Ohio, working as a fireman when he’s not training in the same little gym he’s been training in since his early twenties. Unlike Francis, he didn’t need to fight to escape a life of destitution and despair.

He wrestled at university and just kind of fell into fighting when a friend asked him to train at his gym. He kept going at it because he enjoyed it and was good at it until he happened to become the world champ.

No one expected much out of him and he kept proving them wrong. Through all this, he also managed to stay true to himself, as he kept working as a firefighter despite that UFC money. Wait. I feel like I’m getting my characterisation mixed up. Stipe is the everyman working-class hero, and Francis is the rags to riches story? Oh no, it’s a paradox. Two Rockys!

You see, what we have here is a good example of the machine clouding the real story, these are two protagonists locking horns. Both men are inspirations in a different way. The UFC however, have got the proverbial rocket strapped to Ngannou and are weaving this yarn that he is this phenom and Stipe is the transitional champ sitting on the belt for the time being.

I do acknowledge that Ngannou is the perfect man to bring the heavyweight division into the WME era. A monstrous killer and knock out artist with an enrapturing backstory and a highly marketable look. Joe Rogan said it best: people will pay to see how long his opponents survive.

Dare I say it, it’s somewhat “Tysonesque.” The UFC wants him to win. They know it, we know it, and even Stipe knows it, as he told Ariel Helwani on the MMA Hour recently. Remember that hype train I mentioned earlier? 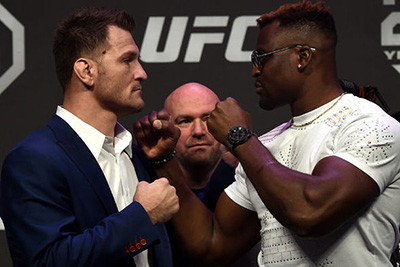 Well, it looks like Thomas the Tank Engine, except with Dana White’s face sticking out of the front. He has done everything except look Stipe Miocic in the eye and tell him to do the damn job.

At the press conference before UFC 219, Dana stood and rattled off statistics on Francis’ punching power with Stipe sat right next to him. They are putting out what they believe to be the spark of a new dawn for the heavyweight belt, with “The Predator” lighting the match.

But of course, any result will produce spoils containing both tragedy and awe. Miocic is on the doorstep of history as a spot atop the all-time heavyweight rankings is within his grasp.

I know the idea of a new megastar in Francis is exciting, but the thought of seeing someone finally kick down that door is mightily enticing when you consider the dice roll that the division has always been.

The Next Big Thing?

If Francis does it though, we may have the next big thing – and his story will have a happy ending – but we lose a potentially special piece of history-making, at least for the time being. If Stipe wins we perhaps lose a new superstar and monster draw. It’s swings and roundabouts, and I don’t know if I love that or hate it, but in the fight game, you simply can’t have your cake and eat it too.

Another curious omission is Miocic’s own heavy-handed accomplishments. He’s riding a five-fight winning streak, with four knockouts in the first round. Those heads hitting the mat belong to Andrei Arlovski, Fabricio Werdum, Alistair Overeem and Junior Dos Santos.

I don’t know about you, but I find that a more impressive run than Ngannou’s. The UFC doesn’t seem to be interested though, but that’s fine. Stipe Miocic is confident in his abilities and knockout power, even in the face of someone with bolt guns for hands. The narrative is not tailored for him, it’s tailored for his opponent, but he rightly understands that won’t matter when the bell rings.

The man born to Croatian immigrants is so wholly uninterested in whatever histrionics pundits and marketing graduates are garnishing this build with. That’s something for people like us who think about MMA too much. It’s like a song you don’t particularly like but don’t hate enough to change the station for on the way to work in the morning. The champ has shrugged off any concerns levelled at him, and for once I buy it.

He seems confident, truly confident, he wants to break the title defence record and plans on doing it by fighting a good fight. He cares not for any three-act structure or the culmination of a hero’s journey. In order to deal with someone as difficult as Francis Ngannou.

You can’t let the hype machine get to you, and you can’t let whatever story you’re being funnelled to have any impact on your mindset. For him, there are no stories, no characters, no hype. Only two men, in an octagon, fighting.

On January 20th we may see a Cinderella story play out. We may see the greatest of all time emerge from his latest trial. But what we will see is a bloody good scrap, and at the end of the day, isn’t that why we’re all here?