Stipe Miocic, pronounced “Steep-A”, not “St-I-P” as some not so cultured commentators might say. The embodiment of the American dream. He is the son of Croatian immigrants who travelled to the US prior to the Balkan war in the 1990’s. A gifted athlete, Miocic excelled in a number of sports including boxing, where he became a Golden Gloves Champion. Before he finally settled on Mixed Martial Arts.

Undefeated in his amateur career, all by way of TKO stoppages. Then going on to win his first 9 fights as a professional. Miocic had all the hallmarks of great talent on the rise. 3 – 2 since 2012, he has managed to nudge his way into the top 5 of the UFC’s heavyweight division. With one of those two losses coming in what was a very close five-round war with the former Champion Junior Dos Santos. 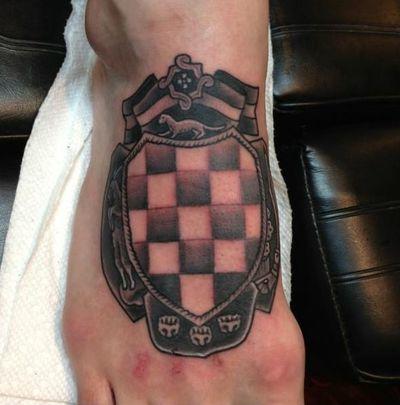 Now set to face the Super Samoan Mark Hunt this weekend at UFC Adelaide. Miocic has been mixing up his training camps between his native Ohio and that of his ancestral home Croatia. Where

he has had the opportunity to train with his personal idol and combat sports legend Mirko ‘Cro Cop’ Filipovic.

With a career in both kickboxing and Mixed Martial Arts spanning some twenty years. Mirko Cro Cop has been the talisman for Croatian fighters for as long as anyone can remember.

And now as his hugely successful career begins to wind down. Miocic may be being viewed by many, especially in Croatia, as the successor who will inevitably don the red and white checkered shorts. Carrying the torch for the small European Nation which has welcomed him so readily with open arms.

During his recent visit Stipe was greeted with full press conference coverage, similar to what any of their own National fighters might receive. Although American through and through. For many in the small Mediterranean nation, Miocic is one of theirs.

It’s a role Miocic seems only too happy to play as in America he may well be viewed as just another heavyweight. While in the small ultra-nationalistic Croatia, he may very well be their very own superstar.

This weekend he meets the Mark Hunt in Adelaide Australia at UFC Fight Night –  Hunt vs. Miocic. Expect a great reception for him as Australia is another country which has seen a large influx of former Yugoslavians down through the years.

Is Stipe Miocic that guy to carry on where his predecessor left off? Only time will tell. How he deals with the looming threat in Adelaide this weekend should answer some of those questions. And may only help to galvanize his status as Croatia’s next rising star.