Just days away from the biggest fight of his life. Stephen Thompson enters his UFC 205 title fight against Tyron Woodley with as much hype and momentum as any other fighter on the card. However, though it feels as though ‘Wonderboy’ has swept through the division rapidly. It’s easy to forget that he has now been fighting in the UFC for almost five years.

In hindsight though, it was Thompson’s first appearance in the main event that really sparked his career to new heights. The date of that main event would be July 12th 2015, the opponent: Jake Ellenberger. Heading into the bout Thompson was riding a four-fight win streak. Rebounding strongly following a disappointing loss to veteran scrapper Matt Brown.

It had been a very strong run too, the most impressive win being a stoppage over talented striker Robert Whittaker. Thompson headed into the Ellenberger fight without a showing since September 2014. Though and that showing wasn’t the contender’s most spectacular, a decision win over Patrick Cote.

Ellenberger didn’t enter in the greatest form either, only recently breaking a three-fight losing streak. Nonetheless, whilst it wasn’t a blockbuster event like this Saturday’s. It was Thompson’s first UFC main event. ‘Wonderboy’ would rise to the occasion too. Coming back from an early knockdown to close the show with a highlight reel spinning hook kick knockout.

It was a finish fitting to a man with Thompson’s style and elevated him in both fame and reputation. However, as a part of one of the promotion’s most stacked divisions. Thompson still seemed far away from a shot at the title. Other circumstances meant that Thompson’s return would be delayed until February 2016. When he was matched to fight the former champion, Johnny Hendricks.

After having a flight cancelled due to his own issues with a weight cut. Hendricks needed a fight and Stephen Thompson was the best fit for that time and the bout would be promoted to the main event. Following the original headliner falling through. Whilst an intriguing clash of styles, in terms of ranking and MMA credentials Thompson was the clear underdog. 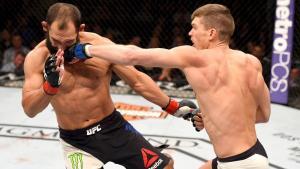 On fight night though, those odds would be turned upside down. Thompson would defend Hendricks’ early takedowns, before using his trademark striking style to completely confuse and befuddle the former champion.

As he only got more desperate and anxious, Hendricks pushed forward. Leaving multiple openings that Thompson would take advantage of, tattooing him with kicks and punches.

The inevitable end would soon come as ‘Wonderboy’ jumped on the stunned Hendricks, unleashing a rapid combination that left John McCarthy with no other choice than to stop the fight. In just over 200 seconds, Thompson had dominated and finished a former champion and one of the division’s most consistent fighters.

It was sublime and spectacular, after showing great promise for years. ‘Wonderboy’ had finally well and truly arrived at the elite level on the world’s biggest MMA stage. Now undeniably a top contender Stephen Thompson would next be booked to fight another one of the world’s best. Rory MacDonald in his home country of Canada.

MacDonald was coming off of a heroic defeat in one of the sport’s all time classic title fights against Robbie Lawler. Though he had fallen just short that night. The fight had earnt MacDonald great respect and credit and so he entered the Thompson fight a slim favourite. Thompson would once again prove the bookmakers wrong though. Using his seemingly unparalleled striking skills to control and dictate the action comfortably. Almost completely muting MacDonald’s revered offence.

The win was an incredible one and the nature of it even more impressive. Thompson was now unquestionably the number one contender and after a brief delay, the fight was made. ‘Wonderboy’ would fight the newly crowned Welterweight champion Tyron Woodley at UFC 205. MMA’s first event at the historic Madison Square Garden.

Woodley poses multiple threats to the contender, he has a strong wrestling base and fearsome knockout power. However, if there’s one thing that’s clear from this trip down memory lane. Stephen ‘Wonderboy’ Thompson seems to perform at his best in the biggest fights on the biggest nights and he’ll need to do just that this Saturday night at MSG.