Boxing can be a frustrating sport to follow at times. There seems to be a constant fight between what we want and what we know the reality of Boxing will serve us, with superfights regularly speculated but rarely delivered. Most discussions of the sweet science will at some point lead to a reference to a better time decades ago, a time when the best fought the best regularly.

There are always exceptions to the rule though and this Saturday night is the biggest of all as Olympic Gold Medalist and former unified Super Middleweight champion Andre Ward takes on the brutal Light Heavyweight king Sergey Kovalev.

It’s a matchup that hearkens back to that aforementioned better time, two undefeated modern greats vying to solidify their spot as the world’s best fighter regardless of weight class and a win here is the fastest route to proving just that. The destroyer Kovalev has been made to wait for a fight of this magnitude.

After attempts at fighting another divisional champion Adonis Stevenson have gone unsuccessfully. Though he has been champion for over three years, Kovalev has failed to find a real rival, someone that his name will be linked within history. Ward may just be that man.

One of the highlights of the Russian’s reign thus far has been his lopsided decision victory over then fellow champion Bernard Hopkins. Whilst the legendary Hopkins was admittedly ageing at that time, he entered the ring in good form and Kovalev did what he had to, dominating Hopkins comfortably in virtually every round.

The closest thing to a rival Kovalev has had to this point though is Jean Pascal, the aggressive former champion made for a good clash of personalities and styles with Kovalev, making for some entertaining press conferences and fights.

The first Kovalev Pascal battle was a particularly exciting encounter as the challenger Pascal had his moments, especially flurrying in the middle rounds. However, for the most part, Kovalev dominated and the inevitable finish would come in the eighth round. The eventual rematch would be less competitive as Kovalev thoroughly battered Pascal, forcing Freddie Roach to pull out Pascal after the seventh round.

However, Kovalev’s last defence against Isaac Chilemba was arguably his least impressive as there seemed to be some chinks in the armour across the twelve rounds. Regardless, Kovalev came out the clear decision winner and was finally prepared for the Ward superfight.

Ward’s road to this Saturday has been very different. After proving that he was the world’s best Super Middleweight by winning the Super Six tournament, Ward’s career would disappointingly stagnate. Injuries and promotional problems would keep the Olympian from staying active but those problems seem to behind Ward now after scoring two wins this year.

Whilst the opposition in those fights wasn’t spectacular, Ward’s March victory over the undefeated Sullivan Barrera was an impressive one and suggests that Ward is every bit as good now as he ever was. Time will tell if that will be good enough though. 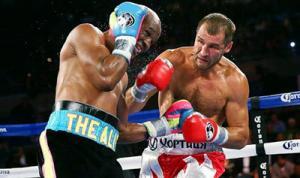 Fortunately, we don’t have to wait much longer to find out the answer. It’s a fight between two of the sport’s best. A classic clash of styles, a violent destroyer knockout artist against a technically brilliant boxing master. A dominant champion that’s looking for the key marquee win to rest his hat on and a once champion, now challenger that’s desperate to solidify his legacy and remind the world that he is the elite boxer of this era.

A fight that signifies a throwback to an era in which the superfights were not just fantasy but reality. There can only be one that claims the crown of the world’s best though and we’ll find out the identity of that man this Saturday night.