Ryan Bader is on a quest

Ryan Bader has been in the UFC for almost eight years, he has had eighteen fights inside the famed octagon and he’s won thirteen of them. He’s a very good fighter, that much is unarguable. However, ‘Darth’ Bader has always seemed to struggle to convince the public that he’s a real contender, he’s never been able to really capture the fight fan’s imagination.

Why? Well, I guess there are many reasons but for me, the main one is that for all of his admirable traits, Bader has struggled to score that one marquee win that is simply undeniable to the casual viewer. It’s nothing new either, when you look back it’s a problem that Bader’s had consistently.

Bader entered the UFC by winning The Ultimate Fighter, stopping Vinny Magalhaes in the very first round. At the time the reality show seemed like a much better entry route to a career in the octagon, as it gave fighters a built-in fanbase.

‘Darth’ looked to be some new blood in a Light Heavyweight division that was in the middle of a transition, the blueprint was there too with fellow Ultimate Fighter winners Forrest Griffin and Rashad Evans set to battle for the title belt.

The American wrestling standout followed up his Ultimate Fighter win with two decision victories over Carmelo Marrero and Eric Schafer respectively. The latter win seemed to highlight some impressive striking growth for Bader but it was his wrestling that looked set to cause trouble for his fellow contenders. Now 3-0 inside the octagon, Bader was matched with veteran Keith Jardine.

Coming Off A Brutal Knockout Loss

Though Jardine was coming off of a brutal knockout loss against Thiago Silva, he wasn’t far removed from a spirited showing against ‘Rampage’. He also holds wins over now UFC Hall of Famers Chuck Liddell and Forrest Griffin, when he was on Jardine was a very tough out for anyone. 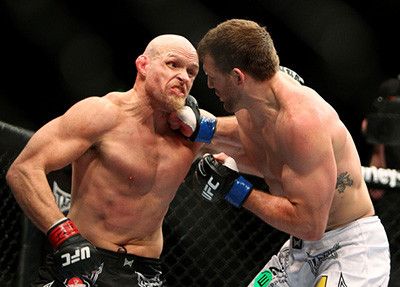 After a strong first round, Bader struggled slightly as a rallying Jardine outpointed him with his unorthodox striking. Heading into the third it seemed the fight was up for grabs with the fighters winning one round apiece.

Bader took it out of the judges’ hands though, hurting Jardine before closing the show with a flying knee and left hook. The Ultimate Fighter winner had overcome some adversity en route to a highlight reel win. It was the perfect learning fight for the rising contender.

Bader would get an even tougher test next, taking on Antonio Rogerio Nogueira. Not only was the Brazilian experienced but he was also incredibly well rounded and posed a serious threat to the still undefeated Bader.

On fight night though, ‘Darth’ dealt with his foe’s skillset perfectly, using his wrestling to dictate and control the action. It was impressive for a still reasonably inexperienced fighter to completely thwart the game of such a formidable contender.

However, Bader wasn’t the only impressive prospect rising through the Light Heavyweight ranks, in fact, he was being slightly overshadowed by his counterpart: Jon ‘Bones Jones. Though their competition wasn’t too dissimilar, Jones seemed to be more explosive, more memorable.

That’s no knock on Bader either, Jones was and is special, regardless of all of the other controversy. Nevertheless, the two rising contenders were matched to fight each other in a fight that would in the end land a title shot for the victor.

Jon Jones Beat Bader At His Own Game

In a fashion that he’d soon become famous for, Jones beat Bader at his own game and surprised many by out-wrestling his rival quite comfortably. In the second round, Jones used his takedown defence to set up a guillotine choke to finish Bader. Jon Jones would earn a short-notice title fight with the win, an opportunity he’d take with both hands as he won the belt from Mauricio Rua in dominant style.

The rest is history. There was never any shame in losing to Jones but that didn’t mean the loss wasn’t a setback for Bader, it certainly was one and a pretty big one at that.

In his return to the octagon, Bader would be matched with struggling legend Tito Ortiz, whose UFC career was on the line. Many onlookers felt that the fight was booked purposefully to Ortiz’s detriment, it seemed a rough stylistic match for the former champion, especially considering his poor recent form.

Ortiz shocked the world though, dropping Bader early and submitting him in less than two minutes. It was easy to forget Bader at the time as most were simply engrossed in the incredible moment for Ortiz. However, looking back now it’s a loss that seems to still haunt ‘Darth’ to this very day in terms of public perception.

I’m not sure the Bader ever recovered his contender legitimacy in the UFC or any of its fans’ eyes after that loss. That’s just an opinion though of course. The reality is Bader lost to a legend who was highly motivated and in hindsight had only been losing to very good fighters.

That didn’t matter to many fans though and Bader’s position as Ortiz’s lone win across those however many years seemed to hurt his reputation. Bader had some rebuilding to do, that was for sure.

Bader rebounded in perfect fashion, quickly knocking out Jason Brilz, positioning himself for a fight with Quinton ‘Rampage’ Jackson. The fight would take place in the Saitama Super Arena, the place where ‘Rampage’ became a star, it was an opportunity for Bader to get some real momentum going once again.

A seemingly injured Jackson missed weight and just looked unprepared as Bader controlled him for all three rounds. ‘Rampage’s condition wasn’t Bader’s fault whatsoever but it certainly hurt the way people viewed his victory. It also didn’t help that the only memorable moment was a throwback Jackson slam, regardless, it was a Bader win and a clear one at that.

In his next outing, Bader would run into a serious problem in Lyoto Machida. Bader just looked completely bewildered by Machida’s unique style and rushed straight into a knockout punch. In fairness to Bader, Machida seemed particularly brilliant that night but once again, that didn’t matter to most and Bader’s reputation seemed to be floundering.

Just like he had before though, Bader came back in a big way, submitting veteran Vladimir Matyushenko in just 50 seconds. The quick win seemed to erase some of the negativity surrounding Bader and the Ultimate Fighter winner was then matched with emerging contender Glover Teixeira in a fight that could get him back in title contention. 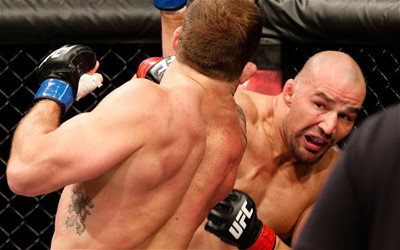 Fighting away from home, Bader started brilliantly, badly hurting the Brazilian early. A wobbly Teixeira backed up, Bader jumped in aggressively looking to finish but in doing so made himself vulnerable. Teixeira landed clean and dropped Bader, finishing him in an instant, all just moments after looking out on his feet.

Some had previously critiqued Bader’s style but it was likely those same people that were equally critical of his over-eagerness in this fight. It was a learning lesson for Bader and one he seemed to pay lots of attention to as he adapted his style in the hope for a title shot.

‘Darth’ would return with controlling victories over Anthony Perosh and Rafael Cavalcante. The wins were clear ones but Bader didn’t take any risks and why would he? He got no credit when he did, just criticism. The pair of wins earned Bader a main event fight against Ovince St Preux.

Fighting in a similar fashion to his two prior wins, Bader outwrestled ‘OSP’ consistently over the five rounds before winning a clear decision. Though it wasn’t a classic, it was a win in the main event and an important one, Bader was now on a three-fight win streak and had renewed his contender status.

Bader would next fight fellow unheralded contender Phil Davis. Neither guy had much fanfare but their legitimacy was unarguable, this fight represented the chance for one of them to break out and get some real momentum. It didn’t end up that way as the fight was a quite cagey one.

However, whilst not flashy, Bader’s performance was an impressive one. The most noticeable aspect of the fight was Bader’s striking, which looked crisper than ever before. Granted it wasn’t a finish but any win over a fighter like Davis is an impressive one.

When Daniel Cormier won the vacant Light Heavyweight Title, it looked as though Bader would finally be getting his long-awaited title shot. They were originally booked to fight before Jones’ legal troubles meant Cormier had to step in to fight ‘Rumble’ Johnson.

Alexander Gustafsson Gets the Nod

However, Bader was shunned in favour of Alexander Gustafsson, who was coming off of a first-round knockout loss. Regardless, Bader was still in the picture and would next fight a returning Rashad Evans. A former champion, Evans’ fame made him a good opponent for Bader’s reputation.

Bader won the fight using his striking to control Evans comfortably for a decision victory. It was a big win for Bader but in a similar fashion to his ‘Rampage victory, it was mostly discredited. Evans’ layoff was the topic of most discussions and Bader’s improvements were ignored by many.

Either way, Bader was on a five-fight win streak and was now one win away from a title shot. However, that win would have to come against Anthony ‘Rumble’ Johnson. A nervy looking takedown attempt left Bader vulnerable and Johnson pounced, pounding him out from back mount in under 90 seconds. All of Bader’s hard work was undone in an instant by the terrifying ‘Rumble’.

Now once again at the back of the line, Bader will fight Ilir Latifi this Saturday night and will look to rebound as he has following his last two losses. If he does the question will arise again, can Bader win the big one? Who knows? I know this though, if he can’t, there’s no shame in that.

Ryan ‘Darth’ Bader deserves respect and credit for his eight-year run in the world’s biggest MMA organization and if he retired tomorrow his career has been an excellent one. He has beaten former champions and legends of the sport and that isn’t undone by some rough outings in the biggest fights.