So there you have it, the Mike Tyson of MMA has been beaten. Not just beaten but destroyed. The reaction has ranged from ‘it’s all over now for Ronda Rousey’ to ‘Holm was lucky’ to ‘the rematch will be money’. The answer may be part of all three.

The lead up to the fight saw a marked change in Rousey’s demeanour. Almost getting towards being an untouchable bully. It wasn’t great to watch, and there was a serious backlash brewing from the keyboard warriors/desktop pundits. The UFC didn’t help matters with their Rousey propaganda, it all appeared that this was the easy fight for Rousey to take another step to the mega-fight with Cyborg at UFC 200 followed by a glorious retirement.

Two things followed, the pre-fight odds and the look of the fighters at the weigh-in. Both looked off. The odds before the weigh-ins where 22/1 Rousey. That was always insane. There is no legitimate elite level title fight that should have odds that stacked in favour of one fighter. There is always a punchers chance. Holly Holm had the background to cause problems on the feet.

She is a top-level kickboxer and an elite level boxer (I am not putting the word female before either of those). And as I was always told when younger, it’s not the loud people you need to worry about, it’s the quiet ones that will cause the problems.

And then the weigh-ins happened. Holm showed up in shape, looking like she was a monster ready to take care of business. Rousey showed up not looking at her best. Not looking in the same shape she was in previous fights. The stare was there, the BMF walk was there. But the muscles, tone and shape were not.

Ronda Relying On The Past

She looked like she was relying too much on the aura, even her eyes weren’t the usual intense self. She completely lost it when Holm got in her face, the fight seemed to be lost there. Never fight on aggression or emotion that will tire you out quicker than 5 rounds.

But I thought that when the fight came she would be the old Ronda, ready to dominate. Ready to smartly dismantle Holm.  Get in there, attack the lower half of Holm, take her down and punch her in the face whilst horizontal.

Then we saw the apparent arrogance of someone who has gone from the motel 6 to the penthouse, it’s hard to motivate yourself to be punched in the face when you are being pampered 24/7, but I digress. 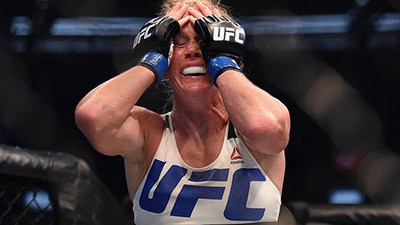 No one should have said to Ronda to stand in the middle, not move her head against an elite boxer. But she did. The improvements in her boxing have been immense, but nowhere near the level to cause elite boxer problems.

That left hand of Holm went in a straight line and connected every time. That is a mistake I make in training every week and I am very very far away from being decent, let alone elite.

It wasn’t a fight, there were no answers from Rousey’s team. Her coach even said after R1 that she was doing great. No backup plan shows amazing arrogance on the coaching staff’s part. The second you take an opponent for granted, you get kicked in the neck and knocked out.

So, what happens next? Can Rousey come back for the rematch? How will this one-sided beating affect her? Once you taste comfort on a level that you never thought you would, can you go back to being punched in the face by someone who is as hungry as you used to be?

Putting Rousey On A Pedestal

The UFC is also guilty here. They put Ronda on a pedestal. They hailed her as the best fighter in history ever. When that happens there is only one way to go. If this was pro wrestling, then Ronda could have gone through everyone to set up a huge money fight with Cyborg. But its real, and when you have a dangerous opponent in front of you, you better have taken them seriously or you’ll get KTFO.

The wakeup call is a good thing for Ronda IF she decides to continue fighting. She had already talked about retirement multiple times before the fight. She had complained about arthritis and other ailments. The bright lights of Hollywood are shining brightly on her, she is amazingly charismatic with millions of dollars on the table in front of a camera. If you had the option of playing a bad-ass for millions, would you really be interested in going back to taking the real punishment?