The Return of Ronda Rousey

The amount of new in MMA lately is hard to digest, just so much of it. This week we are looking at the return of Ronda Rousey. The saviour of women’s MMA (don’t mention Gina Carrano) makes a return to the cage for the first time since losing her title to Holly Holm, who has, in turn, lost the title to Miesha Tate, who has lost the title to Amanda Nunes.

So have we caught up?

Ronda has gone through a transformation. At the beginning at Strikeforce the big smile, arm breaker was making fans (and money) faster than fast. She was breaking people up in record time, building an empire and stacking up the wins while collecting the Strikeforce belt along the way. Her toughest test was Miesha Tate, and that wasn’t a massive test. She was untouched in that fight.

All was good. She defended the title in the same fashion and opened the door for women to (rightly) fight in the UFC. It all started as Strikeforce finished. She stacked up the bodies and stacked up the wins. The big smile was winning fans from all around the globe.

And then the Ultimate fighter happened. She was to coach against arch-nemesis Miesha Tate.  This was when it began to turn around for Rousey. She began acting like a spoilt teenage girl. Screaming and generally acting like a petulant child. The backslash had begun. To those who read her book, this was no surprise. Her competitive nature sometimes gives way to babyish behaviour. 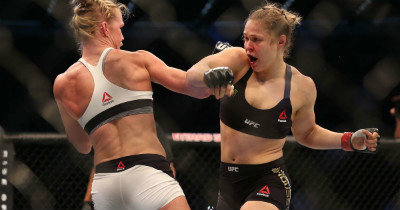 The victories continued until she ran into the human buzz saw that was Holly Holm. A woman trained for 1 mission and that was to beat the unbeatable Ronda Rousey. And that is what she did.

It wasn’t a fight, Holm demolished Rousey. Ronda looked off, she was not herself and it appeared that the fame had gone to her head. She overlooked her opponent and paid for it in the worst way.

Instead of dusting herself off, much like the great Conor McGregor did, she reacted so badly that the media couldn’t avoid it. Up to this point, she was the darling of the media. She could do no wrong. But this was too far. The media reported (and I don’t mean twitter) on her behaviour and even the tiny Paige Vanzant discussed a run-in with her at a Reebok shoot on the Joe Rogan Podcast. That is well worth a listen.

So team Rousey go on the offensive, saying that everyone has turned on her when it was her true colours that have been costing her.

Nunes vs Rousey For The Title

Nunes is dangerous. Rousey struggles under pressure. This is not an easy fight for Ronda. But she should win and get the belt back. Followed by retirement.

In closing, I think Ronda is an elite fighter. But she cannot handle adversity well. If Nunes can put some knuckles on her chin it will put Rousey back in the same position she was in with Holm. Will she react differently? Or will she close down like before?

This is the reason to watch!

Until next time, @nkeegan for more.