Ronda Rousey has been as dominant a champion as any of her male counterparts inside the octagon. Since defeating Miesha Tate to become the Strikeforce bantamweight champion, Rousey has destroyed everyone that has been put in front of her. Apart from a few squirrely moments in her UFC debut against Liz Carmouche, the Olympic bronze medalist has looked unstoppable. Miesha Tate took a moral victory when taking Rousey into the second and third round for the first time in their rematch – such is the aura of invincibility that surrounds the champion.

Rousey’s supremacy has been so complete that some have suggested it could be a good thing if she were to lose next weekend against Cat Zingano at UFC 184. We have heard this being said before. Cain Velasquez, Jon Jones, Georges Saint Pierre, Anderson Silva, Jose Aldo and Demetrious Johnson have all had this charge levied at them. It can be frustrating when the champion has gone through a host of top contenders and the division becomes stagnant.

It can seem even more ominous in the women’s bantamweight division, where there is a dearth of talent and depth. More portentously still is the fact that Rousey seems to be improving with every fight. Women’s MMA is still at a stage where a specialist can dominate the competition. We are all aware of the calibre of Rousey’s Judo, but her striking is improving with every fight. She is one of the few females on the roster with one punch KO power.

That being said, her striking still looks stiff at times, especially when her opponent throws punches at her. That is in part what makes next weekend’s card so intriguing. Cat Zingano has finished her two UFC fights in devastating fashion, putting brutal beatings on Miesha Tate and Amanda Nunes. Though her background is wrestling which she parlayed into an impressive Brazillian jiu-jitsu career.

It is Zingano’s Muay Thai style could cause Rousey some problems. She also brings athleticism and a never say die attitude that has earned her the respect of her opponent already. The fact that she is a slow starter has many writing her off already, but what might play into the fight more is the size disparity.

Ronda Rousey has fought at 145 lb. in the past, while Zingano – like most of Rousey’s opponents thus far – would probably be more suited to competing at a lighter weight class. That option is not available yet in the UFC, 115 lb. being the next weight class down.

The co-main event AT UFC 184 sees Holly Holm make her much-anticipated UFC debut. The former three-weight world boxing champion also has an IKF amateur kickboxing title on her resume and is undefeated as a mixed martial artist. She is undoubtedly the greatest striker in the UFC. Indeed, a boxer of that status training at Jackson’s MMA seems like the perfect storm. She could be the person to capitalise on the gaps in Rousey’s stand up. The burning question is how good is her takedown defence and ground game? 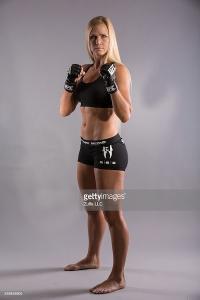 The thinking a year ago would have been that the quicker the two get matched up the better it would be for Rousey, as the more time that goes by for Holm to learn the MMA game the more dangerous she will become. However, the devastating fashion in which Rousey put away Sara McMann and Alexis Davis respectively in her last two fights suggests that it might be a six of one-half dozen of the other type of situation.

Holly Holm Is A Top Contender

Holm is as decorated a striker as they come. She is amassing an impressive MMA record, and the striker vs grappler angle makes a potential fight with Rousey an exciting possibility. Even if Holm is not the one to dethrone Rousey, she can have a successful career in the UFC. The striking skills of many of the top contenders in the bantamweight division leave a lot to be desired, and Holm will likely fare well against the division’s big-name opponents. Holm is undoubtedly a talent that the UFC badly needed and her signing is a welcome addition to the roster.

For all the talk of Rousey’s invincibility, her two stiffest tests could be right around the corner. Jessica Eye is also ever-improving, while the menacing Bethe Correia is vying for an opportunity to add Ronda Rousey to her collection. Invicta FC President Shannon Knapp has also stated that a fight between Rousey and Cyborg Justino is closer than ever. The latter fights a day before the Rousey vs Zingano fight in the same location next weekend.

For all the negatives, the UFC 135 lb. women’s division could provide us with some quality matchups in the coming months. Zingano, Holm and Justino are a murderous row of opponents. As good as Rousey is, no one is invincible.