Its Monday night, I have Sons of Anarchy on and it’s time for another thought-provoking, inspiring and some would say the sexiest blog on the interweb.
This is Keego on the fight business.

I had dipped out of MMA this week. Concentrated on training and trying to cut down on the amount of coffee thrown down my gullet. Failed the latter, excelled in the former.

There was a UFC on this weekend, but I didn’t bother watching. You all know how it went.

Then the announcement came. The next opponent of Ronda Rousey was to be unveiled by the godlike Venus herself (if you’re reading this Ronda, @nkeegan is where you can find me). We all expected it to be Miesha Tate, who had been on a tear smashing through top competition and ready to take aim at the champion.

But then it all changed. The name that was mentioned was Holly Holm. 18-time world boxing champion in 3 different weight classes. It all looks good on paper, but I think we all wanted Rousey v Tate 3. No one has challenged Rowdy as Tate did. No one has lasted as long in the cage.

Why the UFC chose Holly Holm 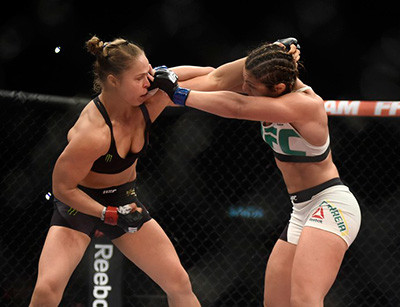 But why have the UFC brain trust picked Holm? I understand that there is an issue with rematches, that’s fair enough. But with such a small division, with very few top-level fighters that means that after this fight Ronda may as well retire.

And don’t mention Cris Cyborg, she has zero intention of fighting Ronda. She can still say she wanted the fight, but when you get bigger when you are supposed to be at a lower fighting weight then you don’t want it. She weighs more today than she did this day last year, how is that wanting the fight?

Which leaves Tate. The only real threat in a threat less division. If it was straight boxing, then Holm would crack Ronda. There is such a huge gap in the boxing skill level that it wouldn’t be a fight. But in MMA everything is reversed. Holm hasn’t fought anyone with any sort of credentials, Rousey has murdered everyone regardless of ranking.

If it was me, and I do point out there is a reason I fly Ryanair when the UFC management has their own plane, I would always take the guaranteed money. Ronda Rousey v Tate would be huge. Both sides are great at the business end of fighting. There is money on the table with this fight and it is being left there. With a Tate fight, the UFC and assuming Ronda wins another tough fight, that makes her untouchable in terms of stature and financial worth. Which then puts the pressure on Cyborg if she is to make the weight and make the fight, it is then changed from huge to a monster.

With Holm, Ronda beats someone who she is expected to steamroll. If Holm takes her into round 3, it is a complete failure. Yes yes, I know it is a fight and anything can happen. But this isn’t really a fight. All the talk will be how tough Holly is, but in reality, it shouldn’t be a fight.

It is a huge risk for minimal reward. If Holm lands the big punch it’ll test Ronda.
As always, feel free to debate, cajole, lambast or harass on twitter @nkeegan.