And so it was that in a division and a sport haunted by the spectre of Ronda Rousey, last night in Vegas, the ghost was finally exorcised – this time with little chance of resurrection.

Ronda Rousey was once no doubt an innovator, her world-class judo a fearsome weapon, and her demolition of all comers certainly planted the first seed in the brave new world of women’s MMA. But there were signs as far back as her ragged victory against Bethe Correira, that the jungle had grown up all around her, and the night was closing in.

Last night, as Amanda Nunes blitzed Rousey with 27 devastating shots to retain her title, it served to reinforce with brutal clarity that the sport she had once bestrode had finally passed her by. There was a sense that the Riverside native was on borrowed time, to begin with. The aura of fear that surrounded her had long since evaporated, replaced by that of almost morbid curiosity.

After her self imposed exile and her evolution into the world’s most glamorous hermit, the only question to be answered was the mystery of which Ronda would show up to lace up the gloves. Was she the destroyer of old, or the fragile figure, hiding from the light? At the weigh-in Thursday, when Nunes stalked the stage wearing the mask of a lion, it not only foretold the mauling of Rousey but at last a changing of the guard. This was not a blip. The Rousey era was over.

It was all so familiar, to begin with. Joan Jett blared on the speakers, the Gracie train at her back hustled her onward and that classic scowl on her face as she made her walk suggested maybe, just maybe, tonight we would see the Rousey of old, rising from the ashes to claim what was hers by right.

The crowd was behind her then, and Buffer’s vocal cords were pushed to cracking point as he roared her name. They came together, Ronda’s poison glare inferring she would not touch gloves, but it happened all the same. 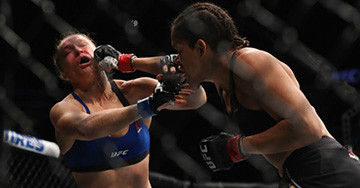 If indeed at the very least we had been hoping for a competitive contest, within moments of Herb Dean’s signal to start the action, the truth of things became pitilessly clear. In the Octagon, self-deception simply cannot survive.

There under the hot lights, Ronda was finally out of her bubble, and Nunes was lying in wait. Rousey bunched up and pressed forward. All those hours on the speedbag and working the mitts would surely show she had corrected any mistakes and could box with the best. She was in for a rude awakening.

In the very first flurry, the champion connected with a sweeping clean one-two that once it landed, we would see connect over and over in the next 48 seconds. During her nightmare in Melbourne, Ronda had been masterfully outstruck over time by the grace and sharp poise of Holly Holm – on that night Holm was merely touching Rousey with fists. Nunes strikes, by contrast, had the look of bricks as they connected.

Ronda took those hits directly, and immediately her footwork gave telltale symbols that she no longer wanted to be there. She shrank away, and the hulking figure of Nunes came onward, hunting for the head of an icon. One would imagine what happened next has been blasted from Ronda’s memory, but if she does recall – she would do well to forget.

Shots rained down, bludgeoning her into defencelessness. Ronda flung a feeble jab and once a clinch was attempted and dismissed. Nunes was no longer the buoyant figure of Fight Week, jovial and smiling wide. Here, with the cage shut, she was positively fearsome. She cracked Ronda over and over with a series of controlled explosions.

This was a surgical demolition. Nunes had suffered the chest-beating and borderline shameless over the promotion of her competitor’s qualities and now she had her moment. She had come to dispense nothing but cold hard facts. In the end, Dean mercifully stepped in to stem the slaughter.

Rousey’s face was the colour of plum, and blood poured from her bruised nose. She had been swept aside, brutalised by the power and patience of the lioness. 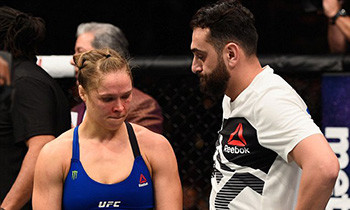 There would be no interview, no Rogan conversation. She left as she had arrived, in stony silence, albeit 3 million dollars richer. Years from now, when she looks back, you would have to wonder was her media embargo a fatal flaw.

Nunes Prepared Away From The Cameras

By covering up the spotlight she lost one of her greatest weapons – the occasion. With no glare to overwhelm her, Nunes was able to sharpen her tools in the dark, allowed maximum possible preparation before coming for the kill.

When the spectacular occurs in sport, people are quick to aggrandise it. Myths rise on the strength of exaggeration and hyperbole, alive in the minds of the fans as minor miracles. What occurred on Friday night is far more often the case. Ronda discovered, as did Bernard Hopkins who planned his storybook retirement bout two weeks ago.

That his long career in fighting guarantees no happy ending. He was blasted through the ropes and banged his head on the cold stone floor. In the world of combat, sports reality is always waiting to blow your dreams away.