Rizin is the new face of Japanese MMA

Last October, former Pride head honcho Nobuyuki Sakakibara announced that his new promotion would be named RIZIN, and Sakakibara, along with the former Pride Heavyweight champion and pound for pound king Fedor Emelianenko would be returning with a bang. The longstanding tradition of the Japanese New Year’s show would be honoured, and for Rizin, all the stars would be out.

A three-day bonanza, involving two blockbuster MMA events featured names such as Fedor, Shinya Aoki, Kazushi Sakuraba and Kron Gracie kicked things off. It took place in typical Japanese MMA style, with the elaborate, Pride style lighting and Lenne Hardt screaming the names of the combatants as they made their way to the ring.

It was a treat for old Pride marks such as your writer and allowed those of us fortunate enough to remember the old days a chance to indulge once again, whilst also offering newer fans a taste of the PRIDE phenomenon.

Whilst there were glimmers of hope on the Rizin card that time had stood still, there were many more reminders that the opposite was true. ‘The Gracie Hunter’ Kazushi Sakuraba’s violent beatdown at the hands of Shinya Aoki by far the most prominent of those. But let’s talk numbers.

The flag-bearer for much of the prime period of the old promotion, Sakuraba has not won a fight since 2009 and returned from a 4-year layoff for his comprehensive defeat, but nonetheless remains a big draw. Headlining the first event on top of Tsuyoshi Kohsaka’s win over James Thompson and the opening round of a Heavyweight Grand Prix featuring King Mo and Satoshi Ishii, RIZIN’s return drew a house of over 12,000.

A couple of days later, with Fedor headlining a star-studded card featuring Kron, Andy Souwer, Rena Kubota and the Bob Sapp – Akebono rematch drew over 18,000. Whilst these are a long way from the attendances that were a fixture when PRIDE was in its heyday, but are impressive nonetheless when compared with their rivals.

The UFC’s record house in that very building was 12,395, for the titanic Mark Hunt vs Roy Nelson clash. That Rizin could nearly match the UFC’s best effort despite the fact there was an even bigger show coming two days later is a good sign. However, the outlook is actually even more positive than that.

Sakakibara was able to get network television for his events, something the UFC has been unable to get in Japan so far. Though some may be more cynical, I think we can call this a successful return for major Japanese MMA.

Looking forward though, can this be sustained? Fedor Emelianenko is 39 years old, Kazushi Sakuraba is 46, James Thompson is 37, Bob Sapp is 42. The point is that the stars we all remember from the early 2000s, from those crazy shows in the Pride heyday will not be around forever.

The challenge for Sakakibara and Rizin, will be can they use the last days of their established stars to create new ones? Their next show, on April the 17th will go some way to answering that question.

Topping the bill is another Pride legend, the currently banned Wanderlei Silva who held the Middleweight (203lb) title from 2001 until losing it to Dan Henderson in 2007.

‘The Axe Murderer’ and a partner that is not yet named will be competing in a grappling tag team match (?!) against Hideo Tokoro and the man Silva won the Pride belt from all those years ago, Kazushi Sakuraba. Wanderlei, who has signed a multi-year deal with Bellator, is expected to fight in MMA rules at some point for Rizin too, all things being well.

The presence of Wanderlei and Sakuraba should draw enough interest to the rest of the proceedings in Nagoya, where an interesting if not quite spectacular looking card is being built. One of MMA’s few Super Heavyweights, Chris ‘Huggy Bear’ Barnett makes his Rizin debut against former world Combat Sambo champion Kirill Sidelnikov.

The Russian returned from a five-year layoff at Rizin’s first show, and with the former Affliction and M1 fighter still, only 27, could be a name to watch in Sakakibara’s burgeoning group of big men.

Experienced Japanese Yuta Watanabe faces off against Bellator’s Hisaki Kato. Kato, known as ‘The Japanese Musketeer’ exploded onto the MMA consciousness with a spectacular KO of Glory middleweight standout Joe Schilling; although he followed that up with an equally comprehensive first-round knockout defeat to the ever-popular Melvin Manhoef. 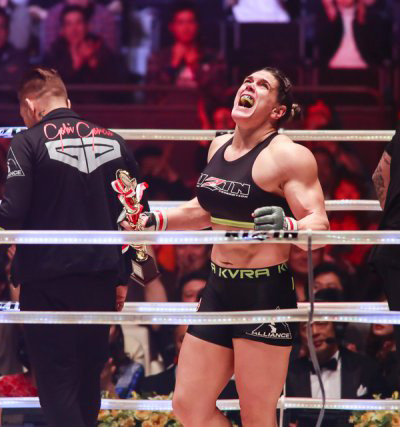 A more familiar name for UFC fans, Daron Cruickshank is a surprise addition to the Rizin roster. The Ultimate Fighter Live alum enjoyed a solid if unspectacular UFC career that sadly ended in January of this year with his third straight submission defeat.

‘The Detroit Superstar’ will be hoping for better results when he swaps the Octagon for the ring, and pits his high-level Tae Kwon Do against former Shooto standout Shinji Sasaki.

Elsewhere Jaideep Singh, the man Fedor Emelianenko made famous returns against Lithuania’s Teodoras Aukstuolis, whilst Chute Boxe’s Allan Nascimento puts his status as a flyweight name to watch up against Yuki Motoya, who is riding an 8 fight undefeated streak.

Lastly, and in what is becoming something of a cult attraction in and of itself, 6 ft 2” multiple time world BJJ champion Gabi Garcia returns. The Porto Alegre native was dropped early on in her debut back in December but got up off the canvas to record a stoppage victory. She will face off against 1-0 Anna Malyukova, and the former TUF assistant coach will be hoping to appear more convincing against the Russian.

Rizin posted a fine all-round score in their first outing, but fears it would be little more than a flash in the pan, one last walk down memory lane for those of us that adored the Pride era refuse to go away. There was a time a few years ago when it looked as though competition in MMA was over, that the UFC would monopolise the industry.

However, the rise of WSOF, Scott Coker’s injection of energy into cash-rich Bellator and ONE FC playing host to big names such as Ben Askren and Bibiano Fernandes have largely put paid to those fears. There is room on the MMA landscape for new players, and in Rizin FF, Sakakibara may hold the past, present and future of Japanese Mixed Martial Arts in his hands.