A fascinating look at the life and times of former world lightweight champion, Ray ‘Boom Boom’ Mancini. Mancini has a fascinating backstory. And who like many other fighters, had a tough upbringing. With both his father and brother being highly regarded in the world of boxing.

Mancini had all the characteristics and qualities of a superstar in the making. As he followed his older brother into the sport, he always had his eye on the prize of a world championship. Even at 11 years of age, telling his father Lenny he would capture the world title for him.

As his career progressed, Ray soon began to outshine his older brother. Who while having all of the tools needed to reach the top. Didn’t have the same level dedication to the sport. After the mills at Youngstown Ohio closed for good, Lenny Junior returned to the sport, saying he had some unfinished business. It was the spark that truly ignited Ray’s desire, as brother Lenny helped elevate his skills inside the ropes.

Moving to the Professional Ranks

After some losses in the amateur’s, Ray was advised to make the move to the professional ranks. As his style was not suited to the amateurs. A move to New York soon followed, along with Saturday billing on the CBS network.

In a post-recession era and with the American audience having been exposed to the Rocky movie. With a Jewish manager, a black trainer and an Italian Stallion fighter! Mancini fitted the bill perfectly in terms of demographics. And America was falling in love with the Mancini story.

Following the violent death of his older brother Lenny. Ray jumped straight back into the ring, with tunnel vision and determination to achieve his goal of a world championship. And it wasn’t long before he achieved another milestone, landing the NABF lightweight title against Jorge Morales.

Failing in his first attempt at the WBC world championship. Ray Mancini would finally claim the WBA world lightweight title in 1982. With the retirement of perhaps the most marketable fighter in boxing, Sugar Ray Leonard. Mancini would quickly become the face of the sport.

The Death of Deuk-Koo Kim 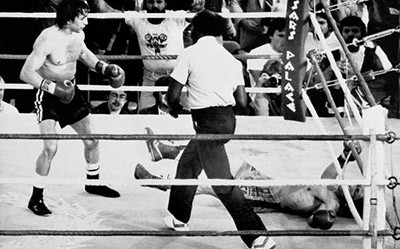 Enter the number one WBA challenger Deuk-Koo Kim, a fighter from South Korean born into the depths of poverty. Kim would test Mancini like no one before outside of his own brother. But he would lose the fight and die during the process.

The fight would be responsible for the change from 15 to 12 rounds in world championship boxing. While also slowly lead to the demise of Mancini’s career.

This is the story of the rise and fall of Ray ‘Boom Boom’ Mancini. And him getting closure on the death of Deuk-Koo Kim. When he finally gets to meet his son and fiance in person. A truly riveting story from start to finish.