Rashad Evans is Back in action

Rashad Evans makes his long-awaited return to action this weekend against Ryan Bader at UFC 192. The former light heavyweight champion last stepped inside the octagon way back in November 2013. When he physically outmatched the trash-talking kingpin Chael Sonnen in a one-sided fight, stopping him inside the first round.

It was Suga’s second straight win in 2013, after a decision victory over Dan Henderson back in June. Evans had lost his two bouts prior to that including a lacklustre performance against Antonio Rogerio Nogueira. And the much-hyped title challenge against his former teammate Jon Jones.

Now with a second win under his belt, things were once again looking up. As Evans was set to face off against Daniel Cormier, welcoming the current champion in his first outing at 205 lbs for UFC 170. It wasn’t to be as a seemingly innocuous accident in his last pre-fight training session signalled the beginning of a lengthy struggle to regain his fitness once again compete inside the cage.

For Evans himself, it was a whole new experience as, throughout his long career, major injuries were something other athlete’s experienced, but not him! 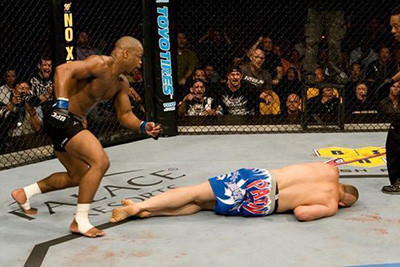 In 25 years of athletic competition, he never before had to go under the knife.

Commenting soon after his ACL operation he said “I’ve been competing and training, doing sports for 25 years and never have had to go under the knife for anything, never been injured. Never happened before. And to have something like this happen, I was like well, it’s been 25 years of just putting my body through pure hell, at some point something was going to give. I’m happy to have gone as long as I have without going under the knife for any reason.”

With everything going to plan, Evans was scheduled to fight Glover Teixeria in February 2014. But the ACL Gods would once again to have their way. Forcing him back under the knife for a second round of treatment and another extended period on the sidelines.

With 24 months of watching and actively commentating on his fellow fighters exploits. He now faces back into stiff competition, right at the very top of the division. No easy return fight for the former champion who without competing has clung in at number 5 in the rankings. A testament to how he is revered in the sport. Or a sign that the division has been if you will excuse the pun “light” at the top.

With his return, there is any number of potential matchups for Evans, in a division which is crying out for a shakeup. With Jon Jones out of the picture for now at least. There is a whole raft of ex contenders who should be lining up to get a piece of the highly ranked former champ.

If Rashad can get a win over Ryan Bader this weekend at UFC 192. With very little in the way of top contenders who haven’t had they’re own recent failed run at the championship. Something tells me it won’t be long before the UFC will once again be lining him up for a shot at whoever is holding the belt.

Might that be Daniel Cormier, who he was supposed to welcome to the division back in February 2014 and who is now the guy to beat?

With Evans having been forced to sit back. And week after week, month after month be force-fed episodes of what became the light heavyweight division soap opera. Can he now make a successful return to action? And who if anyone will skip to his Lou?