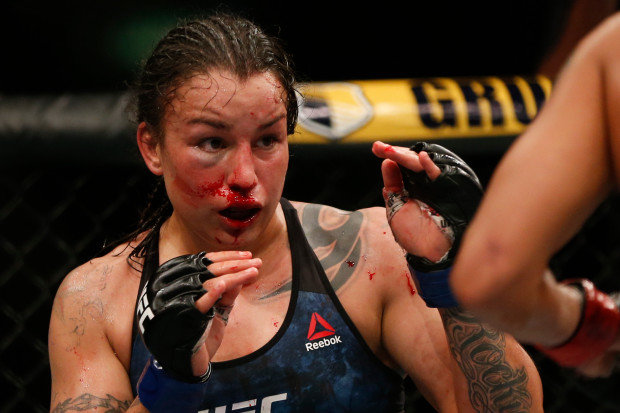 “I’m Done.” An abrasive blend of consonants and vowels for any fighter, and one uttered by Raquel Pennington at UFC 224.  At the end of the fourth, the Colorado native turned to her head coach and verbally capitulated; to put it bluntly, she was quitting. Cornerman Jason Kutz had two choices: acquiesce or encourage. He chose the latter, and I thought to myself “oh boy, this is going to cause a bit of a fuss”. Well, a fuss it certainly caused.

Social media was awash with commentary; every MMA fighter and pundit had an opinion, and most of them proclaimed it fervently. It’s easy to understand a flaring of emotions when a fighter’s health and well being is thrust into the spotlight. We now live in a time where the effects of a beating are more understood and sympathised with, and the gung ho days of yesteryear are thankfully petering out. Take a look at my Justin Gaethje article to see an expansion on this point.

As a result, a coach not allowing their fighter a way out when they are mentally finished is rightfully going to stir debate. While it’s certainly romantic to think of someone dire straits, then getting an intense pep talk from their – ideally older and gravel voiced – mentor and coming back to win the day, it just doesn’t align with the modern perception of fighting. “I see three of him out there.” “Hit the one in the middle”. Very witty line, but the fight probably should have stopped. Unfortunately, what we got at UFC 224 was a perfect example of reality interrupting proceedings.

“Somebody Stop The Damn Match” 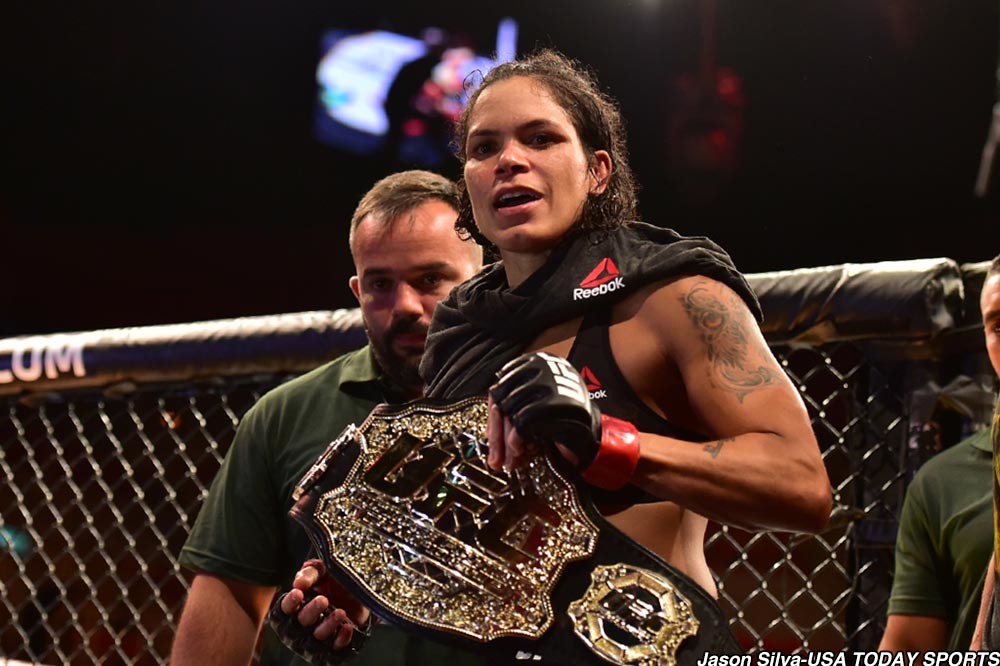 Pennington was getting completely shut down in almost every exchange. She’s as tough as they come and I’m sure quitting doesn’t come naturally to her, but Amanda Nunes looked like a freight train with no signs of slowing. “Rocky P” had lost all four rounds and had no apparent path to victory. So, when she went back out for the fifth, the now both mentally and physically diminished fighter crumbled, left in a pool of her own blood. Given the brief but illuminating exchange in her corner, this TKO became substantially more uncomfortable than usual. The fighter demonstrated she no longer wanted to fight, yet she was convinced to continue and took a significant pummelling for her troubles.

A few things have come to light in the aftermath. On the MMA Hour, Pennington explained that her right leg had been severely damaged after Nunes’ first leg kick. The Brazilian caught her right on the spot of a previous injury and the pain was enough to make Raquel want to vomit. This plagued her throughout the encounter and was a primary factor in mental vacancy going forward. Her coaches were aware of this to an extent, but didn’t quite realise how much it was bothering her.

Two Sides To Every Story 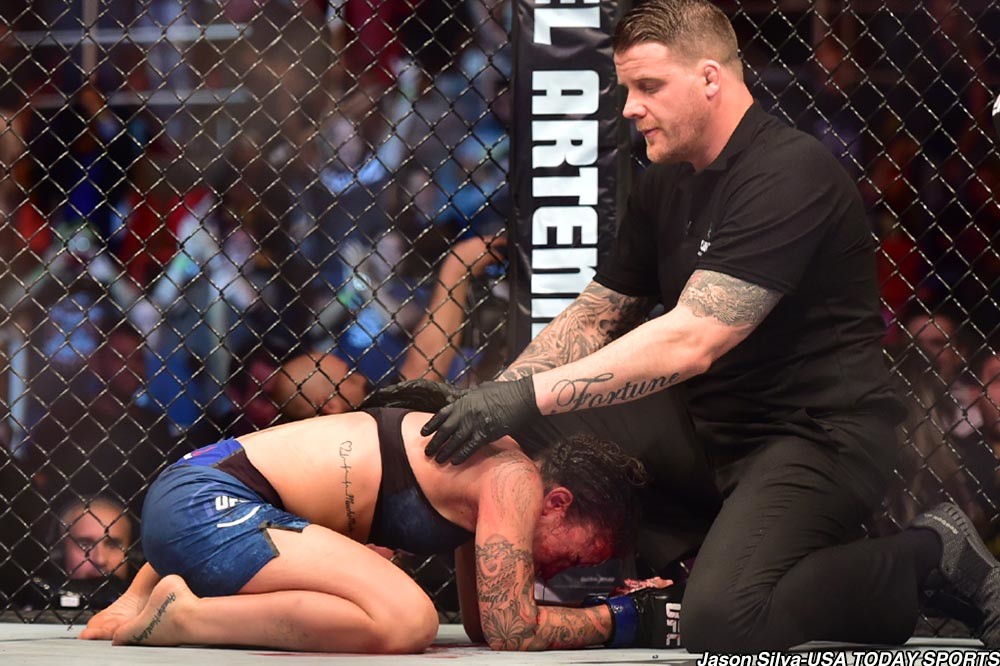 Pennington vehemently believes her coach made the right decision, and she would have regretted it had she given up. It’s easy to make the argument that of course she would say that. Isn’t it down to Raquel though? If I could be banal for a moment, no two coach/fighter relationships are the same; no two human relationships are the same for that matter. If Pennington trusts her coach, shouldn’t she determine if he correctly assessed the situation? None of us were in there, so we can’t know; not really.

On the other hand, one could argue that her coach should have been able to end the fight in spite of any future lament from his fighter. To protect her from herself if I may use the cliché. It is an important and complex topic, with a host of variables in any given context. It should be discussed, but I think to attack a coach with any amount vitriol is rather unfair.

One Minute To Make The Right Call

One minute is how long the man had to deal with the situation. A situation he likely had never been in before or even expected to be in. While the focus, of course, should be on Pennington’s welfare, her coach is only human. What would you do? It’s easy to accumulate all the factors and calculate your reaction in hindsight. Kutz had one minute to decide whether or not to pull the plug on the potential realisation of Pennington’s lifelong goal. Someone he presumably cares about.

The problem is, we live in a world where perception and archetypes reign supreme. I mentioned Rocky before. Imagine if Rocky had told Micky that he was done, and Micky immediately said “okay, the fight’s over.” That would completely contradict the very spirit of the film. As Pennington turned to her corner after getting dominated for twenty minutes and said “I’m done” it’s so easy to fall into a role.

As people – and especially as sports fans – we love the narrative. It’s a chicken or the egg situation; we see these stories that inspire us and teach us. Is that real life informing art, or the other way around? Under high pressure conditions, most of us like to believe we can dig down and gut it out. Like Rocky or any other babyface protagonist did. It seems like the right thing to do, and sometimes it is. Sometimes when you want to quit, you don’t really need to quit. In an instant, how does one deduce if we’re living on a silver screen, or if the real world is about to violently intrude upon us?

The Stigma Of Quitting 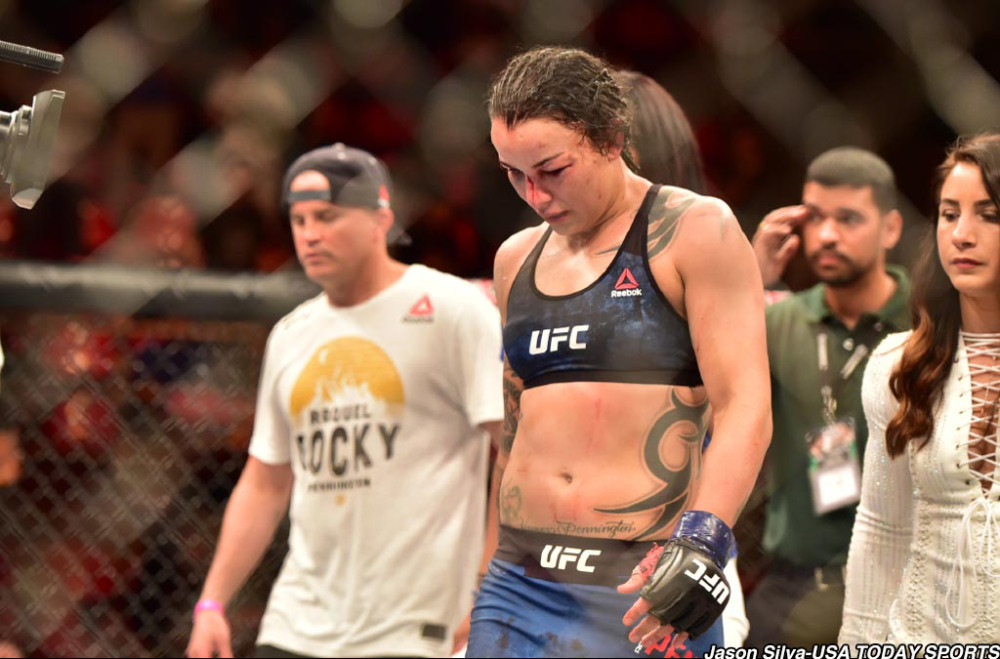 The rear-view is clear, and I can tell you that I now believe the fight should have been stopped. Pennington had virtually no recourse and was in immense physical pain. She was mentally done, and when the mind’s gone, the body follows. Unnecessary punishment is the bane of combat sports, and it is truly wonderful that so many are concerned to see it end. But quitting has that stigma, one perpetuated by the poetic pontifications of thinkers and artists. However, sometimes quitting takes far more courage than battling on, especially when the world is watching. Sometimes it’s frankly foolish to push on.

Miyamoto Musashi said, “Truth is not what you want it to be; it is what it is, and you must bend to its power or live a lie.” Hopefully one day we can all bend to truth’s power, but until then, let’s not forget that mistakes are made and we can do nothing but learn from them.