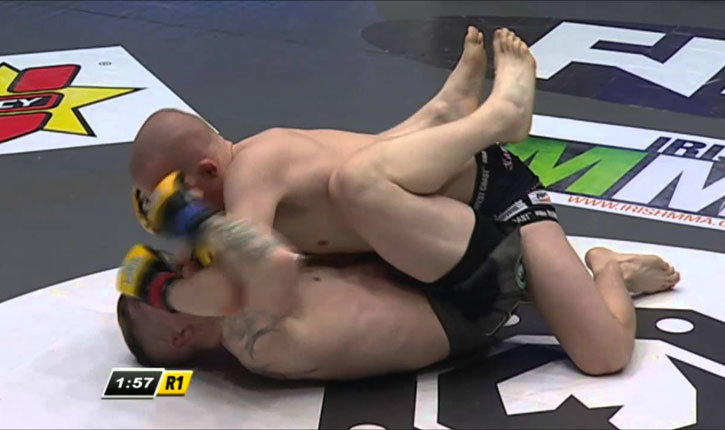 Cage Warriors New Years Eve in the Helix Dublin, saw Paul Redmond (8-4) taking on fellow lightweight Mateusz Teodorczuk (11-2) in what was, for the most part, a very close competition. The beginning of round one saw some frantic exchanges, with both fighters swinging wildly before Redmond got his opponent to the ground.

However, Teodorczuk was able to reverse the takedown and ended up in the guard of the Dubliner. Redmond continued to look for submission after submission off of his back, while Teodorczuk reigned down punches and elbows from the top position.

Redmond reversed the position and followed it up with a foot lock submission attempt, but the Pole was having none of it. Teodorczuk managed to momentarily once again get the mount before the two fighters scrambled and got back to their feet. With quite an even first round it was going to be interesting to see if one fighter could make more of a decisive impact coming into the second.

As the bell rang for the second, both fighters once again came out swinging with neither managing to catch their opponent flush. A Redmond strike missed its target, which Teodorczuk capitalised on, using his momentum to once again score the takedown.

From the top position, the Pole managed to sink in an anaconda submission attempt and within only a few seconds, choked the Irishman unconsciousness.

A very good win for the man from Poland who took out the home town favourite with an excellent display of skill. Not an ending the majority of hometown supporters had hoped for, but an excellent matchup none the less. All in all, a very entertaining fight and we can only look forward to seeing more from both of these fighters in the 2014 fight calendar.