Paul Hughes is an amateur mixed martial arts fighter, fighting out of Young Spartans in Derry Northern Ireland. At 17 years of age, he brings a record of 4 – 0 into his bout at Akuma Fighting Championships on March 14th. Where he is hoping to book his spot in an eliminator, to go on and fight for the Bantamweight title. Known to his friends and teammates by his unofficial nickname Posterboy. Hughes is looking to make his mark as an amateur, before moving on to bigger things in the future. We chatted with him about his career to date and his future plans in the sport.

What is the club like at young Spartans, how many pros, how many amateurs have you got?

Our coach is actually Micky Young, he was the last Irish person to fight Jose Aldo. We have one pro-James Mcerlean and maybe 4 or 5 amateur fighters and that’s it. It’s a small gym-like. But we’ve got five guys fighting in this Akuma to show that’s coming up.

But we have a lot of other guys training, but some of them don’t want to fight. People who have fought in the past, but don’t have time to commit to another fight because of work or whatever.

Do you train in all aspects of MMA or are there certain things that you don’t do?

Well at Young Spartans, Micky goes to Thailand sometimes, he’s very into he’s Muay Thai. But his Brazilian Jiu jitsu is brilliant as well. But I do wrestling classes in Limavady, it’s very good now, I was up there training last night. But apart from that everything is in Young Spartans, that is where we have learned everything. We do every Martial Art really.

So in relation to this next fight which is coming up. It’s an eliminator for the bantamweight title correct?

So what do you know about this guy Dylan Tuke from SBG?

I was originally meant to fight him at the last Akuma, but I took a bad chest infection a couple of weeks before it, so I had to pull out. But he ended up getting another opponent, so I was there watching him. Yeah, he’s one of the SBG fighters, he’s slick. But I think I’ll be too much for him, too strong. Ay, he’d be taller and skinnier.

Do you cut much weight as a bantamweight?

There was a stage, in my last weight cut where I was weighing 70 kg. But that was a couple of months before I dieted or anything like that there. At the minute I’ve been dieting constantly now, instead of just dieting for fights. So my diet is very good now, so I’m walking around at about 68 at the minute, so that’s an easy weight cut. 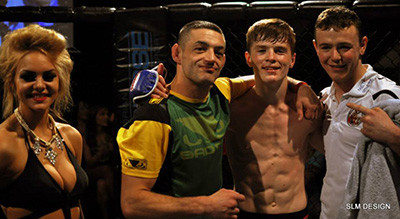 I’m more of an all-rounder, I’m not really weak anywhere. And I don’t excel in any aspect of it. From day one I’ve been doing MMA. You hear all the boys talking about the new breed. I’ve been doing MMA since day one, every technique, every sport, every discipline.

So what are your own plans for the future, do you want to turn pro, have you got any kind of timeline in mind?

100%! For this next fight, I’m off for a week from school in February. I’m going to go to Newcastle, do you know Tommy Quinn and Ryan Roddy? Going over to train with them guys. Honestly, buzzin, absolutely buzzin to get over, it’s going to be an amazing experience. Going to learn so much going over there for a week in February for this next fight.

Definitely want to turn pro soon, it’s not on my mind at the moment, but definitely down the line. I just want to get as much experience as I can as an amateur. I don’t want to jump into too quickly like a lot of people have done before, you only have one pro record.