Fresh off the news that he will now be fighting at UFC 182, Jones VS Cormier and not UFC Fight Night Boston as originally scheduled. We spoke with Paul Felder about his upcoming fight with Danny Castillo. What does a win over a veteran like Castillo do for him and his career. How is his training camp going in Albuquerque with long term training partner Donald ‘Cowboy’ Cerrone and what should we expect to see from the Irish Dragon in 2015.

How is training going, how do you feel about this change of opponent in January?

You know training is going great, I’m out at the ranch again with Cowboy and his whole crew and we’re getting it in. And I’m excited for the change, I volunteered to take that fight. As soon as I saw it on Instagram, Danny was out of an opponent. And we texted Joe silva right away, it’s the kind of opportunity that falls in your lap. Some guys are afraid to take me and we just said screw it and we took it.

Yeah I’m kind of upset that I’m not gonna fight in Boston with the Irish fans, that was going to be insanity. You know, longevity in your career. Getting a guy like Danny and getting the W pushes me way ahead and I’ve got years to fight in Boston.

Yeah, that’s why we just had to jump on it. Getting on the biggest card of the year and cowboys fighting that night. So I just get to stay out here and train and get back there, I never fought with him before. It will just hype me up more than ever, being out there with the whole group.

So I take it as you’re in Albuquerque and training with Cowboy Cerrone, you must be down at Jackson Winkeljohn, is that right?

Yes, he has his own spot at Edgewood, at the ranch where he lives. We have our own cage, are our own mat, padded walls. Equipment, our own training partners, our own coaches. In the morning we go down to Jackson’s like you said and get it in down there. Then we do our strength and conditioning down their too at Elevate.

So you find training at altitude helps you no matter where you’re gonna fight?

Let me tell you training at altitude, it will make a grown man cry. It’s horrible, the first few days you just got to adjust. Fight through the conditions up here and still get your rounds in. When you get down to sea level you’ll be swimming in there.

What will a win over someone like Danny Castillo a veteran of UFC and WEC do for you? 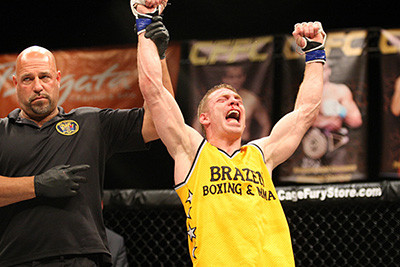 I kinda take he’s credit. Beating a guy like Danny who’s been a veteran of the sport, beating some of the tougher guys and who has fought all the tougher guys out there in the division. Just shows that I belong in the UFC and a, not only should I be here you know.

But I can compete with these guys at the top and that’s really what I want to show them. That’s why I jumped on it.
I don’t plan on going in there ”Oh well, I took a fight against a tough dude, can I stick around for a while?” No, I want to go in there and try and knock his head off and take his position in the rankings.

Fighting in the UFC Octagon

It’s only your second fight in the UFC, did you get those UFC jitters the first time inside the octagon?

Yes, you know I really didn’t think, I thought I was fairly relaxed for the first fight. But looking back on it, I felt afterwards. Yeah, I definitely had some jitters. You know being around Rory Mcdonald and some of those guys for the first time.

I watched these guys on TV every day and suddenly to be in the sauna with them. Cutting weight and realizing I’m going to be on the same stage as them. Started to get a little bit overwhelming, but I fought through it and I got the win in the guy’s hometown. I’ve always thrived on a little bit of pressure, it makes the sport fun. I’ll be nervous for sure, but if you’re not nervous and you’re having a fistfight before a crowd of people, there’s something wrong with you.

Your 9 – 0 now, how do you deal with being undefeated in the sport, do you think about it much?

You know I honestly forget it… sometimes that I’m undefeated. I’d try not to dwell on it, I really do think of it as one fight at a time. I don’t worry up about being 20 and something down the line, fighting bigger names. I just have to think about beating Danny Castillo now and that’s it. That’s all I’ve gotta do. Try not to think about my record versus his record. Because I have fought a few guys that had huge records. 18 – 6, more fights than I have had. The guy that I was supposed to fight in Boston was 19 – 4 too. It’s just one at a time.

The Irish American’s In Philly

We know you’re from Philly, what was it like growing up in Philly as a young Irish American?

The whole community was either Irish Catholic or Italian. That was pretty much my upbringing, getting into fistfights on the street and playing sports, pretty much what we did. And people drank on the corner. Very similar to Boston man, that’s why I was excited for that whole experience. I really can relate to guys that grew up in certain parts of Boston. Obviously not the rich parts or anything like that.

We know you’re a trained actor, who do you think has got the meanest mug in UFC? Maybe junior Dos Santos?

Who’s got the meanest mug? He’s up there, I think McGregor at weigh-ins, he’s pretty intimidating the way he gets in your face. Gonzaga, he’s scary he’s got that mouthpiece with his tooth missing and that. That’s what I gotta get I think. I don’t think I’m intimidating enough, I gotta figure something out.

You’ve got that Celtic red hair, does the short fuse come with that?

You better believe the short fuse comes with that, you can ask any training partner of mine. We were just actually joking the other day. There’s no going light, once I get hit, you’re fighting me. You might be beating me, but you’re fighting me.

Yeah, and I want to bring that out a bit more in this fight. I feel like I was a bit timid, gun shy in the last fight. I kinda like Jason Saggo and I kinda let that out a bit. I don’t think that’s going to be a problem for the next one.