Owen Colgan On Being The Words Hardest Man

We were blessed with the opportunity to get five minutes with the man of the moment Owen Colgan. The famed Irish bare-knuckle phenom answered ours as well as some fan questions. So we could get to know the man which some have compared with the great Fedor Emelianenko.

Micks asks: What got you started in street fighting in the first place? It’s not something that pops into every young man’s mind as a first career choice. Did you let the jobs Councillor know your plans before leaving secondary school?

I remember walking downtown one day and seeing two men fighting outside a post office. One man had skipped the queue and the other man wasn’t having it. They just started throwing wild punches and that got me hooked.

Shane Finn asks: Do ya remember all them bad bateins you used to get from the Charlestown boys?

Owen- I was never beat from the age of 4 to 28. That’s because I had the movement of a young mink and the mindset of a fox. I do remember my best fight win which was against a Polish bouncer outside a nightclub. We went toe to toe for a solid hour. It was hard fighting with no shoes on but when he went down like a tonne of stones I felt great. I remember going home that night and my parents were so proud. The next day though it was back to normal and my parents hated me again.

Micks asks: Has Dana White or Joe still not replied to you?

Dana White needs to answer his phone and Joe Rogan doesn’t have any contact details. Apparently he just uses payphones.

Brian Carbery asks: Owen, When in your career did you start becoming soft?

You can’t always be hard Brian. I’m sure you’ve said that before. Life is not only about fighting. It’s also about travelling and experiencing new cultures. I was in Belfast last Friday which was nice.

Micks asks: For the right type of money or opponent, will we ever see you inside the octagon?

I’d do anything for money. Hence why I’m barred out of Dublin bus station. I’ve got 100percent respect for anyone who gets in the cage. But I’ve spent as much time in a cage as any man. My Dad will back me up on that.

Aaron Jacob asks: Owen did you ever plan on becoming one of Ireland’s standout martial artists (goers) and have you ever been given a beating ?

I lost a fight to a Polish bouncer before. It was the day after I knocked him out. He arrived at my house in the middle of the night with 2 other lads that looked like Bebop and Rocksteady. I was still in bed when I lost the fight so I’m not sure what happened there.

Micks asks: Who is the UFC do you feel has learned and adapted the most to your style? Are you allowed to talk about who has reached out for pointers?

Jose Aldo copied my jab technique where I throw a fake jab toward the sky and then when the person’s looking at your fist, you throw the other fist towards their jaw. 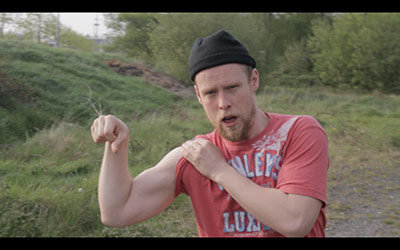 Gary Roberts asks: Owen Colgan, why did you upset Cian Cowley at the recent UFC in Dublin. He was so disappointed you didn’t get in a photo he barely smiles at all anymore. Can we arrange for you to come over to his gym and do a photo session and a lite workout before he’s unleashed onto the MMA world in 4 weeks time at BAMMA in Dublin.

Me and Cian are in talks to make a movie together about two lads who drive around Poland kicking the crap into lads. I’ll be into ye in Warrior Gym soon too.

Micks asks: What does it take to become one of the best. The hard rounds, long hours. Has it all been worth it?

Press ups are a good place to start. I don’t do rounds. I do days. The long hours are tough, but if I wasn’t putting the time in I’d be at home in bed banging away at meself. It’s not worth it. I nearly wanked myself into an early grave

Micks asks: Owen Colgan vs McGregor, a full camp. The handball alley, no holes barred. Who takes it?

A draw by decision and mutual respect for how we’ve shaped the fighting world. Then maybe a few pints.