Stormin Norman Parke Bringing The Thunder and Lighting to Brazil

So far undefeated in his UFC career to date and with an overall active 9 fight win streak. Tonight Norman Parke will once again step into the Octagon in a quest to make it four in a row in the UFC. Should he dispose of a fellow former TUF contestant and decorated Jiu-Jitsu practitioner Leonardo Santos as planned.

Who and what next for the TUF smashes winner? In an absolutely stacked lightweight division, Parke cannot be too far away from a shot at a top-ranked fighter. Should he deal with the threat of Santos is convincing fashion. Surely his name will have to be on the minds of the UFC matchmakers for the upcoming Dublin card in July of this year!

Parke has already publicly stated that he is actively working toward getting on the Dublin card. So providing he does the job in Brazil, we should hopefully get to see the man from Antrim do what he does best back in Ireland. With all the sacrifices he has had to make in both his personal and professional life.

By splitting his training between Alliance gym in San Diego and Next Generation in Northern Ireland. It’s time that all of his hard work finally pays off in the form of a highly ranked opponent. But let’s not pull any punches here. The lightweight division is a who’s who of stone-cold killers. And any fighter who can make it into its upper echelons is deserving of the highest accolades and the pay packet to match.

On closing, one of the most important questions we really wanted to be answered was! no, not what are the stories behind those tattoos. We will leave that for another day. But what does he use in his hair to get it to stand up like that? And being the true gent that he is, he was kind enough to let us in on his secret… 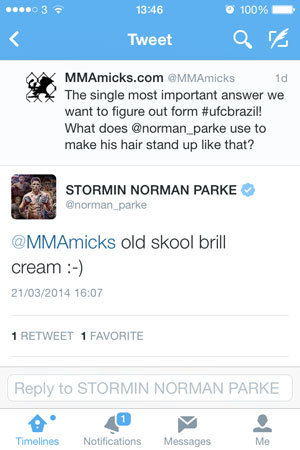